Trump: ‘Delay the election.’ The president is calling for putting off November’s vote “until people can properly, securely and safely vote.”
■ He can’t do that without Congress.
■ From three years ago: A Yale historian warned Trump would try to overthrow democracy—and that his success would depend on whether “something terrible happens to this country.”
■ The Illinois Board of Elections HQ is closed after an employee tested positive for COVID-19.
■ Mayor Lightfoot: “Democracy is under siege.”

Suburban fearmongering. Explicitly fueling racial tension, the president bragged on Twitter about rolling back an Obama-era fair-housing program so “people living their Suburban Lifestyle Dream … will no longer be bothered or financially hurt by … low income housing built in your neighborhood.” 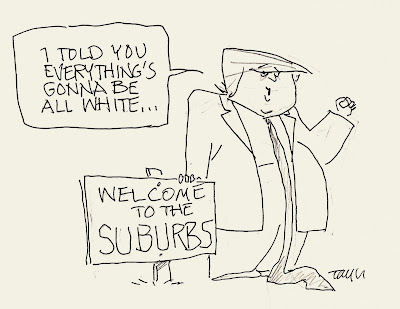 ■ Politico’s Shia Kapos: The president’s words “read like something out of a redlining guidebook from the 1950s and 1960s.” (Cartoon: Keith J. Taylor.)
■ Three Chicago Walmart stores shuttered after looting amid civil unrest almost two months ago are open again: “I’ve never felt so good about spending $300 at Walmart.”
■ The Conversation: U.S. cities are running out of cash fast.

‘Dumbest congressman’ infected. Texas Republican Louie Gohmert, who’s defiantly walked around the Capitol without a mask, has the coronavirus.
■ A Gohmert staffer writes Politico: “Can you include the fact that Louie requires full staff to be in the office, including three interns, so that ‘we could be an example to America on how to open up safely’”?
■ Gohmert had been scheduled to travel with the president today.
■ Former presidential candidate and pizza magnate Herman Cain is dead of COVID-19 …
■ … and so is the Illinois cofounder of the reactionary student group Turning Point USA.

‘Reversal is where we’re headed.’ Gov. Pritzker says if the numbers don’t turn around, Illinois is due for another round of pandemic shutdowns.
■ Leaving Illinois? The Tribune rounds up what to know if you’ll be visiting any of 22 other states.
■ Chicago Park District workers say the administration’s communication in the pandemic has been inadequate.

Docked. Tourism-dependent Navy Pier has laid off 20 percent of its full-time staff.
■ Wendella’s Chicago Water Taxi Service is suspended for the rest of the year.

Friday night blight. The Illinois High School Association is moving football, boys soccer and girls volleyball from the fall to the spring.
■ Whenever fans are allowed back into the United Center, Chicago’s pro hockey team is forbidding fans from wearing costumed feathered headdresses.

Bugged about the bus. As Chicago Public Schools ponder reopening plans, parents worry about the health of kids who ride the CTA to class.
■ The Conversation: Parents with children schooling at home are drinking more.

Sorry, not sorry. Even as he apologized for his company’s conduct in a legislative bribery scheme, ComEd’s CEO told WBEZ he doesn’t think the law the bribes helped pass “was bad policy or … did not produce value to customers.”
■ Funny thing: The Illinois Commerce Committee hearing on the ComEd fiasco is being run by the daughter-in-law of a guy who prosecutors say got a job in the scheme.
■ At least three Democratic Illinois state representatives are now calling for the scandal-tainted Michael Madigan to surrender his seat as speaker.
■ Ohio’s state legislature has ousted its Republican speaker after his arrest in a $60 million bribery scheme.

Alligator alert. Police and firefighters were trying to catch a small alligator in a small south suburban lake …
■ … originally spotted by kids playing.

Chicago’s oldest hospital dying. No mercy for Mercy, the city’s first teaching hospital.
■ But its Catholic ownership may maintain an outpatient center.

Gone from this world. NASA’s launched a rover to Mars in search of ancient life.
■ Civil rights leader and Congressman John Lewis wrote a stirring essay to be published today, the day of his funeral …
■ … at which President Obama was to deliver the eulogy, which you can watch here.

Chicago Public Square keeps coming your way thanks to generous readers including Keith Huizinga, Al Domanskis, Bruce Dold, MJ Garnier, Julia Gray, Ron Schwartz, Beth Kujawski, Jim Peterson, Lucy Smith, Susan Beach, Edward White, Carrie Bankes, Sandy Heitzman, Meghan Strubel and Angela Mullins. You can join them with a one-time tip (neat) or an ongoing pledge (neater). And if you can’t chip in now, no guilt: You help Square grow simply by opening and reading each day. Or by sharing it with a friend. Thanks to all.