‘The gunshots … were about 60 feet away, and I was like, you know, I think I have enough.’ Reporter Bob Chiarito talks with interviewer James VanOsdol about what it was like to be in the thick of unrest in downtown Chicago early Monday.
■ Here’s the Tribune’s tick-tock of what happened, beginning with an anonymous caller warning, “there’s gonna be looting going on.”

‘If this keeps happening, why is anyone going to stay?’ A jewelry and gift store owner whose Michigan Avenue-area store was trashed for a second time in this round tells the Trib she feels “like we are under attack.”
■ Sun-Times reporter Fran Spielman considers the long-term impact of the looting on businesses, shoppers, theatergoers and homebuyers.
■ The pandemic may have sunk Navy Pier.

Black Lives Matter, unrepentant. One organizer says, “I don’t care if someone decides to loot a Gucci or a Macy’s or a Nike store, because that makes sure that person eats.”
■ Also: “When protesters attack high-end retail stores that are owned by the wealthy and service the wealthy, that is not ‘our’ city and has never been meant for us.”
■ Sun-Times columnist Mary Mitchell: “These are not protesters. They are criminals.”
■ Columnist Mark Brown: “An organized criminal element … seems capable of outmanning and outmaneuvering the police at any time.”

‘We need help.’ Because the Chicago cops who shot a man in Englewood Sunday—an incident that fueled at least some of this latest unrest—weren’t wearing body cams, the city is asking people to share any video of the moment they may have.
■ The FBI has set up a website for people to share photos and video of “unlawful violent activity in the Chicago area.”
■ Residents of Englewood are hoping their neighborhood doesn’t take the rap for what happened downtown. 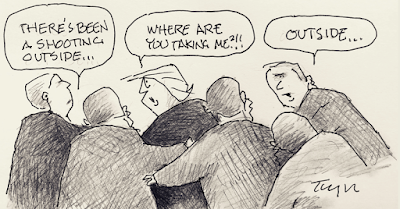 ■ … which CNN’s lead presidential fact-checker, Daniel Dale, tweeted “was one of the worst … in a while from a truth standpoint” …
■ … including a certifiably loony claim that the “1917” pandemic “probably ended the Second World War.” (Cartoon: Keith J. Taylor.)

■ Columnist Rex Huppke: “The only truly American thing we can do right now is admit that American stupidity is prevailing over American common sense.”
‘A desperate political attempt to suppress the vote.’ That’s Capitol Fax proprietor Rich Miller’s (correction, 11:06 a.m.) Gov. Pritzker’s press secretary’s assessment of Illinois Republicans’ lawsuit to suppress expansion of mail-in voting during the pandemic.
■ A Connecticut Republican candidate for Congress, arrested yesterday for domestic assault, is quitting the race—on this, Connecticut’s primary election day.
■ Congressional gridlock has left states to cope with soaring election costs on their own.


A vaccine—maybe. Russia has become the first nation to approve a coronavirus vaccine …
■ … but scientists in Russia and elsewhere warn the Russian rush could backfire.
■ In Florida, COVID-19 cases among children over the last month are up 137%.
■ An epidemiologist who’s had COVID-19 for months shares what it’s like to be a “long-hauler.”
■ The Atlantic shares a joke about immunology.
College football’s fate. Updating coverage: The Big Ten season was teetering on the edge of cancellation.
■ The University of Notre Dame reports its first COVID-19 case since reopening dorms.
■ College sports reporter Shannon Ryan: “We messed up. … That goes for fans, college administrators, the NCAA, local and national politicians and our president.”
■ A USC education professor sees a long-term benefit for higher education from the pandemic.

A brief tornado. The National Weather Service confirms that’s what hit Rogers Park during Monday’s widespread windstorm.
■ An atmospheric science prof explains just what that thing was.
■ A tweet from WBEZ-FM anchor Mary Dixon as the storm approached: “This day has a real end-times vibe.”

■ Poynter’s Tom Jones: Would a Trump loss in November be bad for the news biz?

Thanks to reader Ben Joravsky for catching the error above.