Restroom risks. Sun-Times columnist Neil Steinberg ponders the importance of public bathrooms in a pandemic—even though they’re “perfect virus spreaders … whirling vortexes of airborne contamination, thanks to flushing toilets, and blasted through the room by hand dyers.”
■ Tribune columnist Eric Zorn on the new hygiene: “A last handshake … should be as significant and memorable as last words.”
■ CNN: The pandemic has made Big Tech even bigger.

Illinois’ ‘danger point.’ As the state’s daily coronavirus confirmation count exceeded a level unseen since Memorial Day, Gov. Pritzker warned Illinoisans: “Pay attention. Now is the moment to wear your mask properly.”
■ Search by Illinois ZIP code to learn how many positive cases have been recorded in your neighborhood.
■ Developing: In proceedings you can see here, the nation’s top health experts were set to tell Congress they see no end to the pandemic.
■ McSweeney’s Sean Keck offers a list of “Star Trek villains I’d rather have handling the COVID-19 vaccine initiative ‘Operation Warp Speed’ than Donald Trump.”

An ‘endorsement of white supremacy.’ Immigration advocates are demanding U.S. Immigration and Customs Enforcement cancel plans for a “Citizens Academy” that they say is designed to train people to arrest undocumented immigrants.
■ Newsweek: Opponents have been flooding ICE with fake applications for the academy …
■ … like this one bragging, “I am vigilant, strong, intelligent, courageous, smart, and (as my ex-wife likes to say) not afraid to overcompensate.”
■ New York: “Trump’s Racism Won’t Win the Suburbs. But It May Diversify Them.”
■ Twitter’s banned ex-KKK leader David Duke.

How’d the gun get there? Chicago police were working to figure out how a carjacking suspect in custody at a police station was able to shoot three cops—putting one in intensive care.
■ A Chicago alderman reports a third case of vandalism at his properties, condemning Mayor Lightfoot: “Lawlessness continues in Chicago.”
■ The Cook County Board has OK’d a resolution to “redirect funds from policing and incarceration to public services.”
■ Developing: The Trib reports Chicago’s airports have begun restricting access for unspecified “safety and security” reasons.

Trump’s ‘ultimate weapon.’ A Sun-Times editorial condemns the president for embracing the role of “every autocrat” and advocating the notion of delaying November’s election. 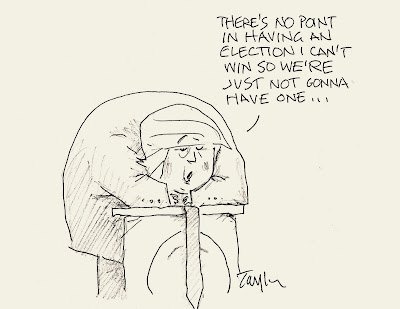 ■ Signs of spine: Republican officials across the country slapped down the president’s suggestion. (Cartoon: Keith J. Taylor.)
■ Hong Kong’s government is postponing for a year legislative elections eagerly anticipated by the pro-democracy opposition.

‘Those in power … are doing their darnedest to discourage people from voting.’ Barack Obama took a swing at President Trump in his eulogy for congressman and civil rights champion John Lewis.
■ The Sun-Times’ Lynn Sweet says it was Obama unleashed.
■ The Trib’s Mary Schmich: Lewis’ funeral offered an escape from the doomsday world.
■ The Atlantic: COVID casualty and ex-presidential candidate Herman Cain “embodied some of America’s best traits—and some of its worst.”
■ Harvard political science professor Thomas E. Patterson: “Republicans are sitting on a demographic time bomb of their own making.”
■ The Onion: “Biden Campaign Whittles VP Shortlist Down To Either Woman Or Man With Long Hair.”

‘I was defamed.’ Embattled and demoted Trib columnist John Kass continues to slap back at his critics—including fellow employees. 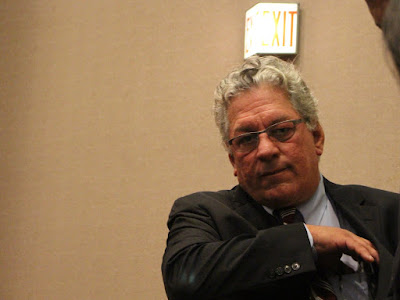 ■ One Illinois addresses Kass: “No one is calling out your politics as a dyed-in-the-wool conservative. Just understand what your politics have become.” (Photo: Ted Cox, One Illinois.)
■ McSweeney’s: “Our publication stands by the decision to give a platform to the sea monster trying to devour our entire town.”

Time to scoot. Chicago’s bringing back its scooter rental program next month with three vendors and (almost) no seated models.
■ A problem looming for Chicago: London’s transit funding model is broken.

You’re reading Chicago Public Square because it’s supported by generous people including Maria Garvy, Susan Kumler, Michael Romain, Mike Fainman, Mark Mueller, Joe Hallissey, Jerry Role, Roy Plotnick, Becky Brofman, Ellen Cutter, Ada Tikkanen, Kurt Wehrmeister, Cynthia Martin and Phil Vettel. You can join them with a one-time tip (excellent) or an ongoing pledge (excellenter). And if you can’t chip in now, no guilt: You help Square grow simply by opening and reading each day. Or by sharing it with a friend. Thanks to all …
■ … including Joe Hass and Ben Meyerson, who helped make this issue better.