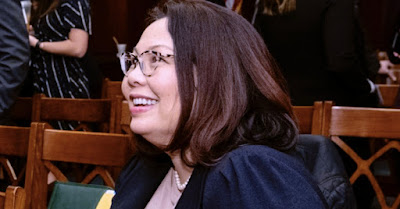 ■ … including a suggestion that her next campaign slogan should be “Get down on one knee and chug.”
■ The Sun-Times’ Lynn Sweet on Duckworth’s chance of becoming Joe Biden’s pick for vice president: “Her birth in Thailand makes some skittish about … Trump trying to whip up his base with a groundless birtherism debate.”
■ Esquire’s Charlie Pierce: “Kamala Harris is the right VP pick at the right time.”
■ Columnist Laura Washington* shares reader reaction to her fear that Biden may not have the mental stamina to win.
■ The Daily Beast: “Trump’s New Adviser Steve Cortes Thinks He Hasn’t Been ‘Fascist’ Enough.”
■ The Times: “Trump’s unfounded attacks on mail balloting are discouraging his own supporters from embracing the practice.”
■ No doubt premature optimism from Raw Story’s Andrew O’Hehir: “Trump is doomed, and he knows it.”

Suburbs’ struggle. One possible consequence of suburban politicians’ successful push to have their communities separated from Chicago for pandemic regulations: Collar counties’ positivity rates are on the rise—partly because of large gatherings of young people.
■ Along the Illinois River Saturday, hundreds of maskless partiers gathered for the annual “White Trash Bash.”

■ The pandemic is killing the children’s-item recycling market.
■ The Atlantic: “How the Pandemic Defeated America.”

Tick, tock. Chalkbeat: Seven questions Chicago parents have to address before Friday, the deadline for choosing a fall school plan for their kids.
■ The Conversation: How to fight homebound kids’ loneliness and strengthen their social skills.

‘Devastating.’ The Chicago Teachers Union is among those mourning the shooting death of a student leader in the push to get cops out of public schools …
■ … one of at least 33 people shot—9 fatally—over the weekend in Chicago.
■ FiveThirtyEight: “Americans Are Convinced Crime Is Rising In The U.S. They’re Wrong.”

Chicago Public Square is free for all thanks to generous support from readers including Melissa Leeb, Beth Botts, Mark Miller, Martin Berg, Tom Barnes, Carol Morency, Lisa Krimen, Chris Beck, Don Kumler, Neela Marnell, Lisa McNulty, Marianne Matthews, Debi Gordon and Marc Magliari. You can join them with a one-time tip (beneficent) or an ongoing pledge (beneficenter). And if chipping in doesn’t work for you, please know you help Square simply by opening and reading each day. Or by sharing it with a friend. Thanks, everyone.
‘Refusing to accept rebel flags is what heroic Americans do.’ Neil Steinberg hails an Evanston woman who confronted men displaying a Confederate banner on a public beach: “Displaying the Confederate flag is not a neutral act. It is aggressive, and its perpetrators deserved what grief they get.”
■ The Chicago Fire Department is investigating a report someone from a firetruck removed a Black Lives Matter banner from a fence.
■ Trader Joe’s is weaseling out of plans to rename products an online petition labeled racist.

Retail ruin. America’s oldest retailer, Lord & Taylor, is filing for bankruptcy protection …
■ … as is the parent of Men’s Wearhouse and Jos. A. Bank …
■ … partly because the pandemic—in CNN’s words last month—“recalibrated the fashion code for professional wear.”
■ Columnist Ron Grossman recalls the time a predecessor of the similarly distressed Neiman-Marcus chain “transformed me into a rhinestone cowboy.”

Where’s your check? Even if Congress agrees to revive pandemic stimulus payments, creaky state unemployment systems would probably take weeks to pump the money to those who need it.
■ More than 100 current and former top U.S. business executives say without a relief bill, the nation’s small businesses face a “catastrophic” future.
____
* A co-panelist with your Square proprietor last Friday on WBEZ.