Quarantine wars. Beginning Friday, Chicago’s prepared to slap fines of up to $500 per day on people who’ve spent more than 24 hours in Wisconsin or other states listed under the city’s growing quarantine order but haven’t spent two weeks indoors.
■ New York, New Jersey and Connecticut have added Illinois to their quarantine orders.
■ A Tribune editorial: Mayor Lightfoot’s “largely unenforceable proclamation” is nevertheless “a direct challenge … to continue taking the COVID-19 pandemic seriously.”
■ The New York Times is tracking which states don’t want which other states’ citizens to visit without quarantining.

‘I don’t know we’ll ever get to a point where COVID will be eradicated.’ Chicago’s top doc says the pandemic probably will last years.
■ The Times: More than 6,300 coronavirus cases can be linked to U.S. colleges.

Blonde submission. COVID-19 has evidently done what neighbors and Chicago regulators couldn’t: Close the controversial Bottled Blonde “restaurant.”
■ Block Club Chicago: Restaurants still waiting for outdoor-dining permits say the city needs to move faster if small businesses are to survive.
■ After months in which the pandemic has ravaged Illinois nursing homes, two of the state’s top overseers of the industry are out.

‘Refuge for political cowards.’ Trib columnist Eric Zorn rejects politicians’ use of the word if in calls for scandalized Illinois House Speaker Michael Madigan’s resignation: “Madigan needs to step down … for no other reason than that the brazen bribery scheme to which ComEd has confessed played out right under his nose.”
■ North Side Sen. Heather Steans agrees.
■ But—as of Square’s email deadline—only one Democrat in Madigan’s House had done the same.

Buh-bye. Under pressure from state and local officials, federal agents have left Seattle.
■ A Portlander that federal agents shot with nonlethal munitions: “If that round had hit me in the neck, I definitely would have died.”
■ Journalists and legal observers covering Portland protests say federal law enforcers have shot at and maced them in violation of a court order.
■ ProPublica: “What Has Happened to Police Filmed Hurting Protesters? So Far, Very Little.”

Buh-bye. Twitter temporarily blocked Donald Trump Jr.’s ability to tweet after he posted poppycock about coronavirus cures and masks.
■ Updating coverage: The chiefs of Facebook, Amazon, Google and Apple were set to testify remotely to Congress about their market dominance.
■ Watch live—or later—here.
■ The Interface suggests questions lawmakers should ask.
■ Chicago aldermen want to ramp up plans for free internet access citywide: “We need to let the technology firms do what they do best.” 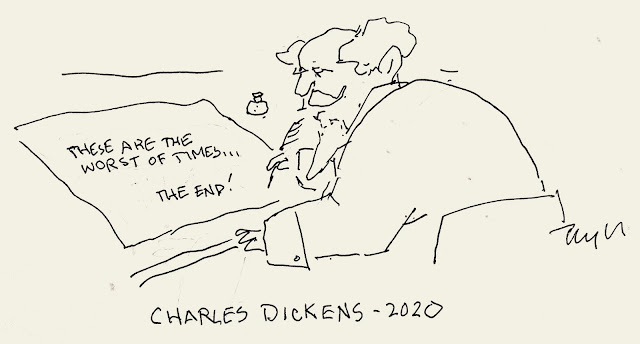 John Kass strikes back. The embattled Trib columnist rejects his colleagues’ complaints of “bullshit anti-Semitic” bigotry: “I will not soil my name by groveling to anyone in this or any other newsroom” …
■ … but he takes that stand from his new back-of-the-paper placement—today, on page 14.
■ Facebook commenter Alan Hommerding translates Kass: “What happened to the America where privileged blowhards could write whatever they want without any consequences?”

Chicago Public Square is free for all thanks to generous support from readers including Maureen Gannon, Deb Abrahamson, Mary Kay O’Grady, Christine Hauri, Gordon Mayer, Rebecca Ewan, Denise Mattson, Fredric Stein, Joseph Pesz, Catherine Johns, David Weindling and Heather Alger—whose birthday was yesterday. You can join them with a one-time tip (outstanding) or an ongoing pledge (outstandinger). And if you can’t chip in now, no guilt: You help Square grow simply by opening and reading each day. Or by sharing it with a friend. Thank you.
■ And thanks to Phil Vettel for catching an error above.