Off, Wisconsin! Here’s what Chicago’s newly expanded COVID-19 quarantine order means for visitors from the Badger State …
■ … and Indiana may be next.
■ Gov. Pritzker: “We’re not going to have to do this forever … but we’re not there yet … and frankly, we’re not going to be there until 2021.” 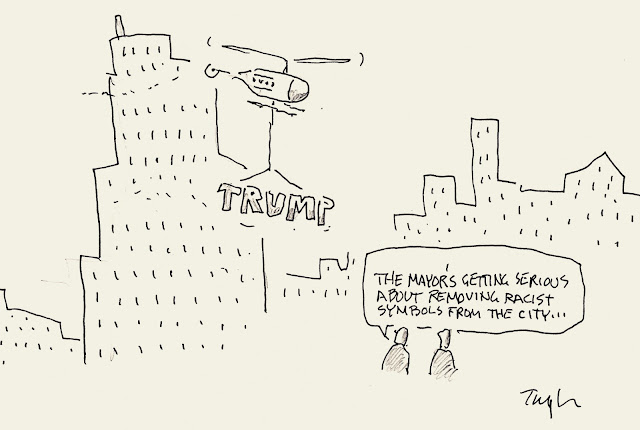 ■ One Columbus statue remained standing in Chicago. (Cartoon: Keith J. Taylor.)
■ The city’s assembling a team of about 250 cops to deal with large protests.
■ Chicago’s historic Central Camera, destroyed by vandals in May’s protests, will reopen—temporarily, next door—in September.

‘4 million families and businesses … deserve to be compensated.’ A class-action lawsuit says ComEd owes its customers at least $150 million for rate increases and other perks it scammed through legislative bribery.
■ Mayor Lightfoot says she expects ComEd to do a lot more “to right historic wrongs” if it wants to keep doing business in Chicago.
■ The city’s offering rent and mortgage help to another 10,000 households.
■ Cook County’s extending through Oct. 1 the deadline for paying the second installment of this year’s property taxes with no penalty.

Want to test a vaccine? For clinical studies of coronavirus treatments, Northwestern University is calling for 5,000 Chicago-area volunteers—especially workers in the health care, retail, nursing home and factory sectors.
■ Here’s where to sign up.
■ Two Illinois hospitals have made U.S. News and World Report’s list of the nation’s 20 best.

Free stuff. Beginning today, the CTA is giving out thousands of free Ventra transit cards and “Travel Healthy” kits, including masks and sanitizer.
■ Prevented by the pandemic from gathering fans in Grant Park, Lollapalooza is going free and virtual Thursday through Sunday with live and historic sets via YouTube.
■ Chicago’s shuttered a longtime Irish pub for repeatedly ignoring the city’s mask and last-call rules.

Teachers ‘are preparing to die for your children.’ Columnist Irv Leavitt, whose wife worked in Chicago Public Schools, on the debate over how and whether to reopen schools: “We haven’t protected teachers before. Why should they trust us now?”
■ Schools CEO Janice Jackson: “We’re going to have to start talking about bringing kids back into a school setting over the next two years.”
■ The Conversation: “Yes, kids can get COVID-19.”

‘This is bad, really bad, and it will get worse.’ Yahoo Sports columnist Tim Brown says baseball’s COVID crisis reflects “America’s … willingness to offer up others for its amusement.”
■ Dr. Anthony Fauci, the nation’s top infectious disease expert: The baseball season is in danger. 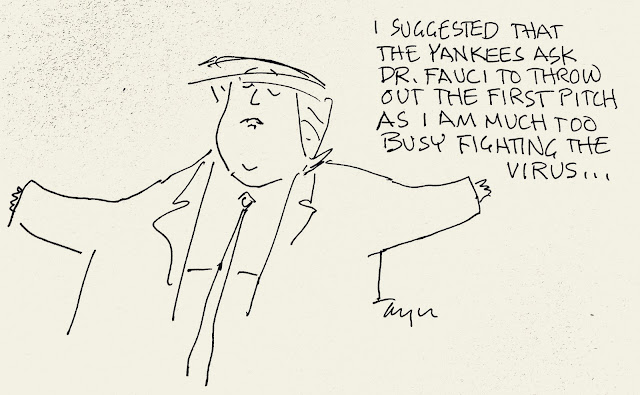 ‘My post was in poor taste.’ A DuPage County Board candidate is dropping out, under fire for a tweet in which she described herself as laughing at video of a projectile hitting a Portland law enforcer in the head.
■ Notre Dame has backed out of plans to host this year’s first presidential debate.
■ Some of the music industry’s biggest stars—including Mick Jagger, R.E.M., Lorde, Neil Young and Regina Spektor—have signed an open letter demanding politicians get permission to use songs at rallies.

An apology. Yesterday’s edition of Chicago Public Square, which brought news of reactionary columnist John Kass’ removal from Page 2 of the Tribune, titled that item “Kassquake.” A better headline would have been “Kass hole.” Square regrets not using that instead.
■ The Illinois Jewish Legislative Caucus writes to the Trib: “Stop peddling anti-Semitism.”
■ Sun-Times columnist Neil Steinberg sarcastically finds restraint in the column that put Kass in the hot seat: “There was no caricature of a fanged, hook-nosed Jew sprouting octopus tentacles straddling [the] globe.”

Chicago Public Square is free for all thanks to generous support from readers including Leigh Behrens, Christine Cupaiuolo, Chris Ruys, Jon Hilkevitch, Robin Randall, John McClelland, David Kindler, Ken Scott, David Boulanger, Colette Hogan and Tim Brandhorst. You can join them with a one-time tip (lovely) or an ongoing pledge (lovlier)—and see your name here tomorrow. And if you can’t chip in now, no guilt: You help Square grow simply by opening and reading each day. Or by sharing it with a friend. Thanks to all …
■ … including Chris Koenig and Pam Spiegel, who make so many editions of Square better.