■ In a simultaneous session, Joe Biden promised that, before the election, he’ll come down off the fence on whether to expand the Supreme Court.
■ Didn’t watch one or the other? Politico recaps and Politifact fact-checks both.
■ Poynter’s Tom Jones: “Who had the best night of all? NBC News’ Savannah Guthrie” …
■ … although Trump’s niece had a problem with one of Guthrie’s most talked-about moments. 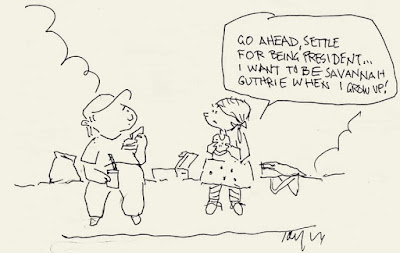 ■ A Trump campaign adviser tells The Daily Beast: “He didn’t spend the whole time yelling, he didn’t piss himself… so this was as best as we could have hoped for.” (Cartoon: Keith J. Taylor.)
Trump trolled. Hours after Guthrie grilled Trump on his Twitter dependency, the president early today apparently earnestly retweeted a piece from the satirical Babylon Bee …
■ … which promptly dug the president’s hole a little deeper.
■ C-SPAN has suspended its political editor—who was to have moderated the presidential debate that didn’t happen last night—after he admitted lying about a tweet he sent.
‘What the heck were any of us thinking, that selling a TV-obsessed, narcissistic individual to the American people was a good idea?’ That’s Nebraska Republican Sen. Ben Sasse, criticizing Trump early in the week on a phone call with constituents …
■ … and warning of a “Republican blood bath” in the November elections for Senate.
■ The daughter of presidential lawyer Rudy Giuliani urges people to vote for Biden.
■ But the Tribune’s Eric Zorn warns, “Don’t for a second think this race is over.”
■ A coalition of House progressives, including Alexandria Ocasio-Cortez, is calling for a Biden administration not to give Senate-confirmed jobs to corporate executives or corporate lobbyists.
■ The Washington Post: Trump staffers are on edge about their job prospects if he loses.
No sleeping bag required. But. The Sun-Times’ Mark Brown: “It took me two hours and seven minutes to early vote this week … only five minutes of which involved actually filling out the ballot.”
■ Consumer Reports: How to vote safely in person, despite the pandemic … and the lies.
■ Chicago police are prepping for the worst after the election. 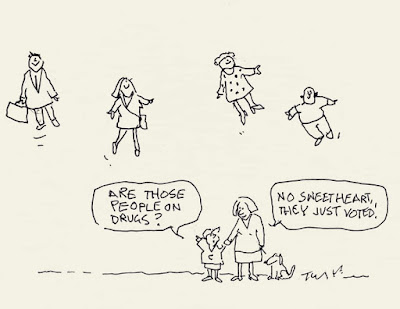 Help keep Chicago Public Square coming. Your support—either a one-time tip (great) or a continuing pledge (greater)—ensures this service remains free to anyone who wants it.
■ Thanks to Pam Spiegel for some capital help correcting this edition.
Email ThisBlogThis!Share to TwitterShare to FacebookShare to Pinterest
← Newer Post Older Post → Home