Kamala Harris sidelined. The Democratic vice presidential candidate has canceled her travel through Sunday because her communications director and a flight crew member have contracted COVID-19.
■ For the first time since last week’s debate between Harris and Vice President Pence, a journalist asked Harris whether she noticed the insect on Pence’s head.
Town hall turmoil. People inside and outside NBC are asking why the network is giving President Trump “exactly what he wants”—a town hall broadcast competing head-to-head tonight with ABC’s Joe Biden session. 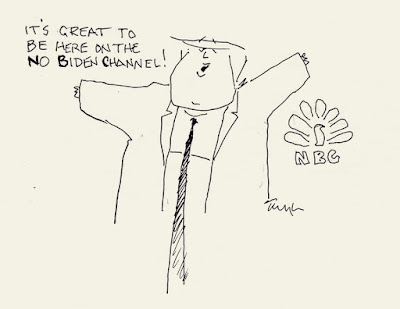 ■ Mic’s Jacqui Germain: “The networks have merely created another opportunity for each man to speak to only his supporters.” (Cartoon: Keith J. Taylor.)
■ Journalist Jill Filipovic complains NBC is rewarding Trump’s debate cowardice …
■ … but Poynter’s Tom Jones suggests “this could be something that backfires on Trump.”
‘Paid for with taxpayer money, and … plainly intended to help Trump’s flagging reelection campaign.’ Politico reports that, as Trump’s fundraising has flagged, he’s using more taxpayer money to compensate.
■ September brought the Biden campaign more cash than any other presidential campaign’s ever raised in a month.
‘Trump … is emboldening the extremist right.’ The New York Times: “As Trump’s Language Grows More Heated, Fears Rise of Political Violence.”
■ The Illinois teenager accused of using a gun to shoot and kill two demonstrators and hurt a third in Kenosha—and defended by Trump—won’t be charged for gun crimes in Illinois.
■ A 36-year veteran of the U.S. Justice Department is quitting, blasting Attorney General Bill Barr as “determined to turn our democracy into an autocracy.”
‘It was a sham from the start.’ A University of Chicago law professor who worked with community leaders on a list of proposed changes to Chicago police use-of-force policies condemns the department’s acceptance of just five of 155 recommendations.
■ Five Chicago cops face suspension in connection with last year’s cover-up of then-Supt. Eddie Johnson’s inebriated time behind the wheel.
‘This virus isn’t taking a holiday.’ Gov. Pritzker’s worried that the winter holiday season will prompt even people who’ve been conscientious in the pandemic to let their guard down.
■ To reduce the disease’s spread in Black Friday shopping crowds, Walmart is spreading out its sales dates.
■ More than 100 MBA students at the University of Chicago are under quarantine because several tested positive for COVID-19 following an off-campus and partly maskless party.
Nice to have known. Even as Trump was telling Americans early this year that the coronavirus was “very much under control,” his advisers were warning major Republican investors and donors the economy was at risk.
■ Melania Trump says 14-year-old Barron Trump tested positive for COVID-19.
Voting early? Chicago’s opened sites in all the city’s wards for people to cast their ballots now and the elections board is encouraging you to do that. 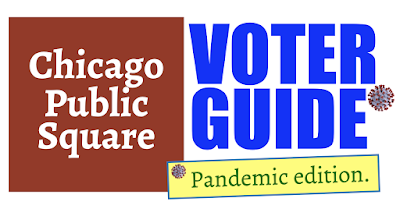 ■ But don’t vote in ignorance. Check the Chicago Public Square voter guide.
■ Women’s March Chicago is hosting a virtual rally Saturday to get out the vote.
Barreling on. Updating coverage: The Senate Judiciary Committee seems deadset on advancing Amy Coney Barrett’s Supreme Court nomination next week.
■ Vox recaps five key moments from Wednesday’s hearings …
■ … including her refusal to acknowledge the science of climate change.
■ The Sun-Times: A Chicago crook’s case illustrates Barrett’s black-and-white approach.
Simon says … Thanks to tech and media reporter Simon Owens for citing Chicago Public Square in his newsletter (second item in this edition).
■ You can support Square with a one-time or continuing contribution at any price you choose.
■ Thanks to Mike Braden for identifying a need for a colon above.
Email ThisBlogThis!Share to TwitterShare to FacebookShare to Pinterest
← Newer Post Older Post → Home