Chicago Public Square is free for all thanks to generous support from readers including Ann Spittle, Stephanie Kiesling, Stephan Benzkofer, Beth Martin, Jan Czarnik, Dave Aron, Janice Kieckhefer, Heather Foote, Jim Prescott, Lee Greenhouse, Gene Kannenberg Jr., Mike Cramer, Suzy Carlson and Wendy Greenhouse. You can join them with a one-time tip (nice!) or an ongoing pledge (nicer!). And if you can’t chip in now, no guilt: You help Square grow simply by opening and reading each day. So let’s get on with that:

What went wrong. An AP/Kaiser Health News report details how state and local governments starved their public health departments for years before the pandemic hit—with employees paid so little that they qualify for public aid.
■ The government’s top infectious disease executives are dumping on American Airlines’ decision to pack its flights again: “We don’t think it’s the right message.”
■ A southwest suburban senior living facility has remained COVID-19-free through the pandemic, but its residents have spent four months alone in their apartments.
■ Some Illinois nursing homes are letting visitors in again.
■ Millennium Park’s Great Lawn is open again—with circles painted to keep people apart.

Masked mindset. Leading Republicans—with the exception of … well … you know who—are now embracing the wearing of masks.
■ Funny thing: The Trump reelection campaign has been spending big to promote the social media pages of his campaign manager.

‘A Band-Aid on a gunshot wound.’ Tribune columnist Dahleen Glanton is unimpressed by new Chicago Police Supt. David Brown’s approach to the city’s plague of violence.
■ Brown blames a precipitous drop in the number of arrests last month on the pandemic; the police union blames morale. 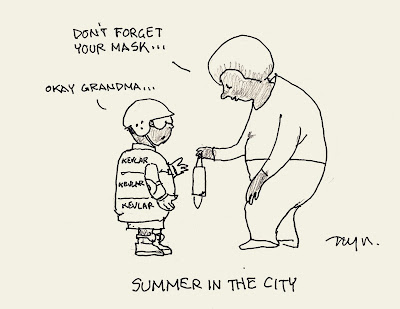 ■ Police say a 3-year-old Chicago girl was shot and critically wounded last night in what may have been retaliation for a shooting earlier in the evening. (Cartoon: Keith J. Taylor.)
■ A Trib editorial calls for release of the full report on how ex-Supt. Eddie Williams Johnson got a pass from cops after falling asleep at the wheel of his car: “The public has a right to know what happened, who acted appropriately, and who didn’t.”

‘I asked if a burglar would be carrying a jug of milk from Walgreens.’ Tribune sports reporter Phil Thompson, who’s Black, recounts his police stops through the years.
■ State’s Attorney Kim Foxx says her office will drop charges against people arrested for minor charges—like curfew violation and disorderly conduct—during protests of police brutality.
■ The CTA has fired two workers after one of them was caught on video body-slamming a passenger—who now wants them arrested.
■ Sun-Times columnist Phil Kadner: “Black lives matter, but maybe not so much if you are among Illinois’ political leaders.”

Over and out. A Pulitzer Prize-winning investigative reporter who took to the pages of The New York Times with a plea for “a civic-minded local owner or group of owners” to buy Tribune Publishing is leaving the Trib …
■ … as the company’s board gathers for a fateful meeting.
■ In a Twitter thread, Trib alumnus and Beachwood Reporter proprietor Steve Rhodes condemns “institutionally racist” management at the paper through the years.
■ Radio behemoth iHeartMedia is launching a Chicago-based audio Black Information Network.
■ A top Fox News anchor is out in the wake of a sexual harassment complaint.

Can-can’t. Wondering about a shortage of the Fresca soft drink, the Sun-Times’ Neil Steinberg traces the cause to the pandemic shutdown of bars.
■ An outbreak of intestinal infections has the feds taking a close look at a suburban facility that bags salads for grocery stores.

‘The greatest translation, democratization and preservation of any Broadway show, ever.’ The Trib’s Chris Jones raves over the movie version of Hamilton coming Friday to Disney+.
■ With Broadway closed for the rest of the year, IndiWire’s David Ehrlich calls Hamilton “the rare cash-grab that feels like a public service.”
■ HuffPost UK explains why singing is particularly menacing in the pandemic.

Thanks, Mike Braden, for catching an error above.