‘Stop demonizing us.’ In remarks whose eloquence far exceeded her “F___ __U” retort last month, Mayor Lightfoot defended Chicago and the nation’s female mayors … and handed President Trump his hat. 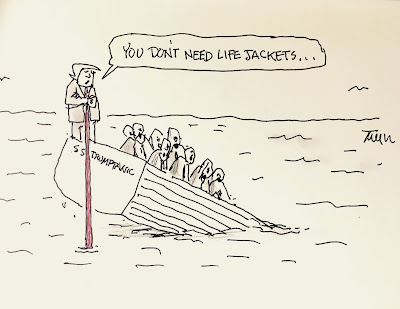 ■ She was responding in part to a Tribune editorial, about which Beachwood Reporter founder Steve Rhodes writes, “I don’t know what kind of alternate universe that editorial board lives in, but in this one Trump promised four years ago that he could solve Chicago’s crime problem in a couple of days and we’re still waiting for the plan.” (Cartoon: Keith J. Taylor.)

‘The governor needs to die and I will gladly kill him.’ Since the start of the pandemic, Illinois State Police have investigated close to a dozen threats against J.B. Pritzker.
■ Illinois Attorney General Kwame Raoul shares a first-person account of his COVID-19 infection: “Even a taste of what this virus can do will convince you not to let your guard down just yet.”
■ Coronavirus casualties include Chicago’s Michelin-starred Blackbird restaurant and Costco’s half-sheet cakes.
■ CNN: The U.S., with 4% of the world’s population, has 25% of its COVID-19 cases.
■ Europe’s reopening, but Americans aren’t welcome.
■ The next pandemic? Maybe a new strain of the swine flu.

Asleep at the wheel. Newly released police bodycam video shows former Chicago Police Supt. Eddie Johnson napping in his SUV after a night of drinking.
■ The city reportedly has more than one video of the events that led to Johnson’s dismissal.
■ Chicago plans to keep 1,200 extra police officers on the street to avert crime through the 4th of July weekend.
■ But civil rights advocates are sounding the alarm about a plan to sweep up teenagers on “drug corners.”
■ Reuters: Thousands of U.S. judges who broke laws or oaths have been allowed to stay on the bench.

Fairer workweeks. The Tribune explains the impact of a Chicago law taking effect Wednesday, requiring many companies to give workers advance notice of schedules—and pay a bonus for last-minute changes.
■ Also kicking in: An increase in the minimum wage—including domestic workers, regardless of the size of a household’s staff.
■ New Illinois laws include an end to revocation of driver’s licenses for people who haven’t paid fines on time.
■ A Chicago congressman is leading the call to expand a national moratorium on evictions.
■ Insurance giant Aon says it’s ending pandemic salary reductions, repaying workers what they gave up and adding a bonus.

Tribune’s fate. News industry analyst Ken Doctor says the next day or so could determine the future of the Chicago Tribune’s parent company—and shape the destiny of the newspaper business in general.
■ Media watchdog Robert Feder: Shareholder Alden Global Capital could be “free to bleed the company dry through sweeping layoffs and other cutbacks to vital journalism.”
■ Free online tonight: A Chicago panel discussion on the “Journalism Jobs Outlook in the Era of COVID-19.”

[Insert wiener joke here]. The website of Chicago’s Oscar Mayer Magnet School was hijacked by an operation selling Viagra.
■ The City Council plans a virtual hearing Thursday morning on whether to leave cops in Chicago’s schools.

Comedy icon gone. Carl Reiner, director of classic movies including Oh, God and The Jerk, and creator of The Dick Van Dyke Show, is dead at 98.
■ Another classic directed by Reiner’s son Rob, The Princess Bride, is being reborn in serialized star-studded, home-movie-style video chapters.

Chicago Public Square is free for all thanks to the generous support of readers including David Mendell, Sandy Kaczmarski, Patrick Olsen, Mena Boulanger, Diane Scott, Cate Plys, Joseph Sjostrom, Lisa Colpoys, Catherine Schneider, Avis Rudner, Joe McArdle, Joe Hass, David Ibata, Thom Clark and Maureen Stratton. You can join them with a one-time tip (nice!) or an ongoing pledge (nicer!). And if you can’t chip in now, no guilt: You help Square grow simply by opening and reading each day. Thanks to all.