What it’ll take. A draft of the (correcting) Trump administration’s UK government’s guidelines for restarting businesses in the pandemic includes specific steps for shops, offices, factories and warehouses, hotels and restaurants, outdoor labor, and workers in vehicles and in other people’s homes.
■ BuzzFeed News details just how hard it is for restaurants to reopen safely.
■ Struggling Chicago restaurants plead: Order directly from us, not through GrubHub.
■ Food distribution sites are popping up in Chicago’s food deserts on the South and West Sides.
■ Colleges and universities face a hard road back.
■ With the next round of property tax bills due in weeks, Cook County is worried about businesses and homeowners who won’t be able to pay. 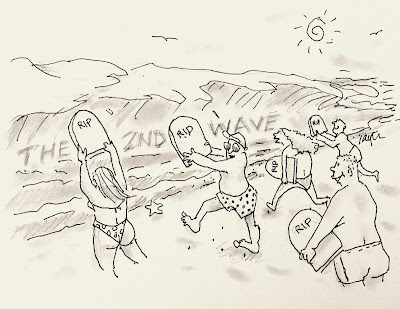 ■ CNN’s Brian Stelter: “The hard truth is that COVID-19 is going to be with us for a long time.”
■ It’ll be even longer if anti-vaxxers stick to their guns. (Cartoon: Keith J. Taylor.)

‘Ya’ll overdoing it.’ The youths are giving Mayor Lightfoot backtalk as she cruises the city telling them to stay home.
■ The city’s threatening $5,000 fines for those who throw parties during the quarantine.

‘Passes constitutional muster.’ A federal judge has smacked down an Illinois church’s challenge to Gov. Pritzker’s stay-home order …
■ … but the church ignored it anyway.
■ Illinois Sen. Tammy Duckworth condemns a Pritzker protester’s sign bearing a Nazi slogan.
■ Politico’s Shia Kapos on the challenges facing Lightfoot and Pritzker: “April’s battle was to acquire personal protective equipment. May is all about enforcing.”
■ Illinois’ COVID-19 testing has set a record but remains short of Pritzker’s goal.
■ At least one Democratic governor is pushing to reopen businesses on an accelerated schedule.
■ Pritzker and Lightfoot will be honored with commemorative pandemic bobbleheads.

Supreme opportunity. For the first time since the telephone’s invention, the U.S. Supreme Court today has been hearing arguments by phone—because of the coronavirus crisis—and the AP’s been blogging the historic proceedings “courtside.”
■ Lawyers planned to dress up and stand up during their presentations, even though the justices won’t see them.
■ Hear the proceedings here. 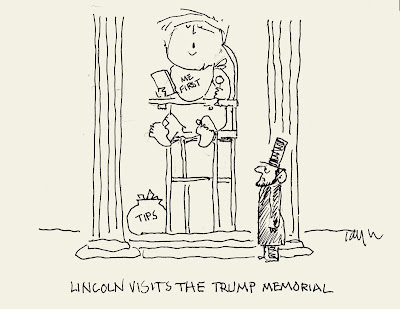 ■ … where he asserted that he’s been treated worse than Lincoln. (A bonus Keith J. Taylor cartoon.)
■ Trump claimed again that Joe Biden sent him an apologetic note—something Biden has repeatedly called a lie.
■ Biden and Elizabeth Warren warn there’s no oversight for coronavirus relief funding—because that’s what Trump wants.
■ Sun-Times columnist Neil Steinberg defends Biden as “the only solution” for saving the U.S. from leadership by “a pea-minded, jabbering solipsist.”


‘The teachers … had a special building and all the kids went there.’ Read science fiction writer Isaac Asimov’s prophetic 1951 (very) short story in which children of 2155 look back nostalgically on old-style “schools.”
■ That’s not the only aspect of this crisis Asimov foresaw.
■ Hear raw audio of a never-broadcast-in-full interview with Asimov from 1976.

May the Fourth be with us. It’s Star Wars Day, a pun-inspired celebration of George Lucas’ universe.
■ Tomorrow night, a Cinco de Mayo meteor shower.


Thanks, Mike Dessimoz, for flagging an error in today’s lead item.