‘It never happened.’ In his first direct statements on the matter, presidential candidate Joe Biden unequivocally denies an ex-Senate staffer’s sexual assault complaint against him … 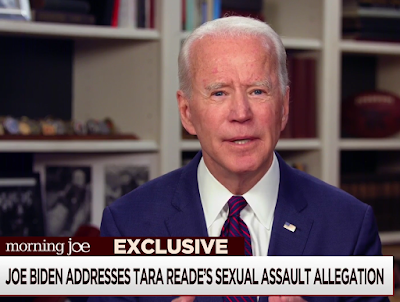 ■ … and he’s calling for release of records related to the investigation …
■ … but not a trove of his Senate papers now at the University of Delaware.
■ See his interview on MSNBC: “This is an open book. There is nothing for me to hide.”
■ Read his written statement.
■ The New Republic’s Alex Pareene: Democrats aren’t stuck with Biden.

‘Reprehensible.’ Gov. Pritzker has rejected questions about reports his family has left Illinois.
■ The reporter who raised the issue, Patch’s Mark Konkol: “Maybe there wouldn’t have been such a ‘reprehensible’ story if the governor’s handsomely paid spin machine responded to calls and emails with reasonable explanations … about the first lady’s whereabouts.”
■ The governor is brushing off a downstate church’s lawsuit against his stay-home edict: “The parishioners … ought to do the right thing and … ask that they have something online.”
■ The governor’s newly extended order allows for “the free exercise of religion”—in groups of “10 people or less.”
■ Masks and more: What else is new in the Illinois pandemic rules taking effect today.
■ Where to get free masks in Chicago this weekend.
■ Here’s the full text of Executive Order 2020-32.
■ A thing the state doesn’t have, but Pritzker says it needs: A system for tracking who’s been in contact with newly diagnosed COVID-19 carriers.
■ University of California San Franciso research suggests “a whole new way to fight COVID-19.”

‘It’s going to be really hard.’ Illinois workers talk to WBEZ about their struggle to pay the rent on this, the first of the month. 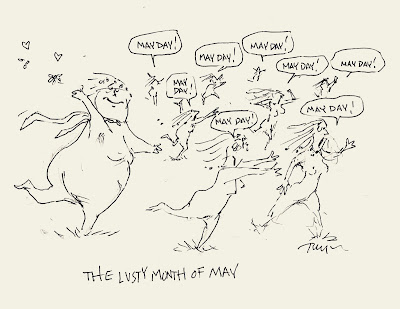 ■ AP: Deputies may not be knocking at people’s doors, but the money’s due nevertheless. (Cartoon: Keith J. Taylor.)
■ Small businesses may have trouble hiring workers back because the federal loan program makes competing with unemployment benefits hard.

Decision day. May 1 is the day by which high school seniors across the state are supposed to have picked their college, but it’s a tough call when schools haven’t committed to opening in the fall.
■ Mayor Lightfoot danced on TikTok to announce Oprah Winfrey’s virtual commencement address in June for Chicago’s graduates.

‘Another link between the Daleys and the coverup.’ A lawyer who’s pushed the investigation of a fatal 2004 punch from then-Mayor Daley’s nephew to a young man reacts to release of long-secret cellphone records.
■ Read the Sun-Times’ long-running series on the case.

Mask miscreants. Chicago police were on the hunt for two men who stole a symbolic mask from one of the lion statues guarding the entrance to the Art Institute.
■ The Daley Center Picasso also has a mask.
■ For the first time since the Great Depression, the 116-year-old Ravinia Festival has canceled its whole summer schedule.
■ While your attention was elsewhere, the U.S. has seen more deaths from tornadoes this year than in any year since 2012.

Video conference privacy. Consumer Reports offers tips for keeping Zoom, Google, Microsoft and WebEx from getting all up in your business.
■ Better Government Association chief David Greising: Time for the Illinois General Assembly to meet virtually.
■ Tribune columnist John Kass says Gov. Pritzker “could stand up and demand the legislature meet, with masks and social distancing.”


Happy second birthday to a source frequently cited in these dispatches: One Illinois.