Mutant menace. Researchers at Los Alamos National Lab have identified a mutated strain of the coronavirus that seems to be more contagious than the versions scientists have been using to develop vaccines and treatments. (Update, May 7: The Daily Beast recommends, “Everybody Chill the F*ck Out About These COVID-19 Mutations.”)
■ At least 15 kids in New York City—ages 2 to 15, not all of whom have had COVID-19—have been hospitalized with a mysterious syndrome that involves inflammation of blood vessels. 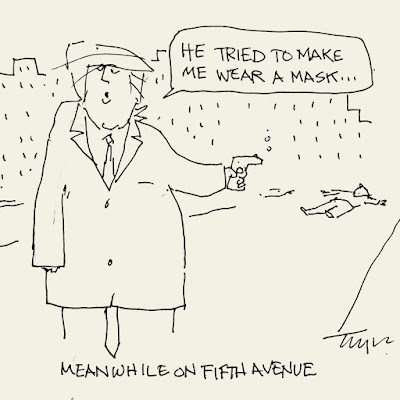 ■ The model favored by the White House has doubled its projection for pandemic deaths by August—mainly because states are reopening too soon. (Cartoon: Keith J. Taylor.)
■ The Trump administration is forbidding members of its coronavirus task force from appearing at congressional hearings.
■ Politico: States’ plans to team up on reopening aren’t going all that well.

‘I said we can hug again when the coughs are all gone.’ Welcome to Hell World blogger Luke O’Neil asked parents how they explain the pandemic to their kids.
■ A pediatric surgery fellow writes in The Washington Post: “The children of health-care workers in the United States are not okay.”
■ The Atlantic’s Tom McTague: “The lockdown might be proving harder for lots of people without children” …
■ … but, the Sun-Times reports, it’s misery for thousands of parents with kids in Illinois’ child welfare system.

‘I can work at my own pace without being interrupted.’ A 13-year-old writing in The New York Times endorses distance learning.
■ Happy Teacher Appreciation Day.

‘It’s not a panacea. But it’s a much better option than a placebo.’ After tests in Chicago and elsewhere, the antiviral drug remdesivir has won FDA approval as a COVID-19 treatment.
■ A Penn State microbiology prof explains why COVID-19 demands a vaccine and why SARS—the severe acute respiratory syndrome of almost 20 years ago—didn’t.
■ Wired has rounded up all “everything you need to know about the coronavirus.”

Avast, ye swabs. The Sun-Times’ Lynn Sweet explains the crucial role those hard-to-get medical tools play in the fight against COVID-19.
■ HBO’s John Oliver (in video you can see free on YouTube) explains why testing is the way to “return to the world that we are used to.”


‘Today’s Worst People In Chicago.’ Beachwood Reporter proprietor Steve Rhodes bestowed yesterday’s honor on landlords who last week stood with Mayor Lightfoot to take a “solidarity pledge” to “to provide relief to beleaguered tenants” but who also have been evicting plenty.
■ Gov. Pritzker downplays problems with Illinois’ unemployment claims system, but sources tell CBS 2 the backlog is real and getting longer by the day.
■ Out at the City Club of Chicago: Its longtime president, embroiled in a corruption probe of his longtime lobbying client, Commonwealth Edison. (Clarification: This item is not new; it dates back to December—reporting by WBEZ, newly revisited today by staffers as part of the station’s pitch for listener support.)

Media mayhem. The union representing Chicago Tribune editorial workers accuses the company’s new owners of planning to “furlough half of the … features and sports departments, plus an unspecified number of photographers, for three straight months.”
■ Curbed Chicago, which has covered the city’s real estate market, is down for the count.
■ NPR is cutting pay for workers making more than $80,000 a year.
■ WBEZ-born This American Life has won the first Pulitzer Prize for audio reporting.
■ Pioneering journalist and civil rights icon Ida B. Wells, who adopted Chicago as her home, won a posthumous Pulitzer.
■ Newsrooms’ Pulitzer celebrations in the pandemic were … different.
■ Here are all the winners.


Thanks to Mike Braden, for noting a couple of unnecessary words above. And to Judy Graf for flagging the dated WBEZ item above.