The plan. Gov. Pritzker has laid out a five-phase, four-region blueprint for reopening Illinois if the COVID-19 pandemic fades. 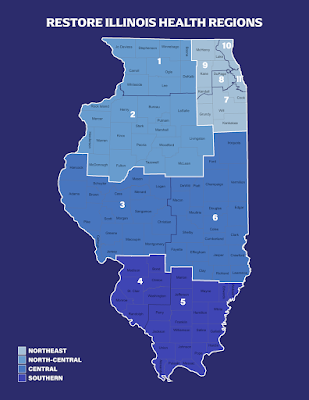 ■ Conventions, festivals and other major events are out until Phase 5.
■ A Sun-Times editorial: “If folks in Southern Illinois hit their numbers, they’ll be going to stock car races again long before South Siders in Chicago go to White Sox games.”
■ But, as Politico explains, “normal” is still a long way away.
■ And a second wave almost certainly lies ahead.

‘Mommy’s not coming back.’ The Tribune recounts the death of Krist Angielen Guzman, a Chicago-area nurse who died after contracting COVID-19 in the line of duty.
■ The Sun-Times’ Mark Brown: “I wonder how many of the people who are so righteously concerned about their right not to stay home … ever pause to consider the ramifications for health care professionals like Guzman who are duty-bound to attend to the sick.”
■ It’s National Nurses Week.
■ Illinois’ daily COVID-19 death toll hit a record yesterday.


Meat up. As processing plants across the country struggle with disease outbreaks and worker shortages, Chicago stores are rationing meat purchases and raising prices. 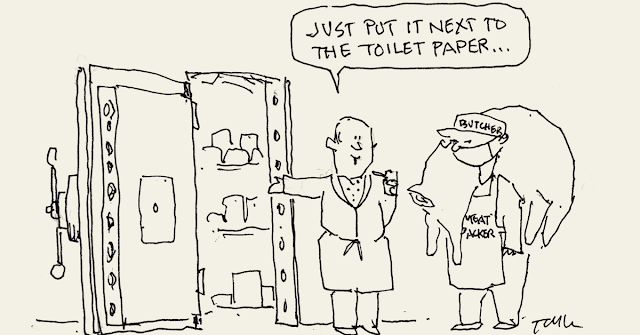 ■ Citing those skyrocketing prices, a Chicago sandwich shop has shut down. (Cartoon: Keith J. Taylor.)
■ A Mexico border correspondent writes for The New York Times: If Americans don’t want to go hungry, they need to stop classifying “essential” workers as “illegal.”
■ Chicago-based United Airlines is planning a deeper round of layoffs.
■ Beachwood Reporter publisher Steve Rhodes’ firsthand take on the governor’s underwhelming explanations for Illinois’ overwhelmed unemployment system: “There probably isn’t a state in the union that isn’t having this kind of problem. But that doesn’t mean Pritzker should deny it exists—or blame filers.”

‘Someone will get hurt.’ Illinois retailers are worried that enforcing the state’s guidelines for the wearing of masks inside stores will lead to violence.
■ Visiting a factory that makes masks, President Trump declined to wear a mask.
■ The Daily Show’s Trevor Noah acknowledges “wearing a mask can make it hard to breathe” but adds: “You know what else can make it hard to breathe? Coronavirus.”

‘It could not have been a coincidence that from the South Side of Chicago to South Jamaica, Queens, you get the same outcome.’ Lawmakers from Chicago and other cities are demanding the Justice Department investigate the possibility civil rights were violated by the government’s response to the pandemic in communities of color.
■ Read the letter, signed by two Chicago aldermen.
■ Free COVID-19 tests are coming to Chicago’s Auburn Gresham neighborhood Friday.
■ The AP: Coronavirus patients in rural Georgia are faring worse than almost anywhere else in America.

Down, not out. A gallstone infection has sent pivotal Supreme Court Justice Ruth Bader Ginsburg to the hospital again …
■ … but she was set to hear court arguments today by phone anyway.

Uncaged Byrd-Bennett. Chicago’s crooked ex-public schools CEO has been released from a federal prison.
■ The Illinois attorney general is suing a redevelopment company and its general contractors for the botched smokestack demolition that poisoned the air in Chicago’s Little Village neighborhood.
■ The Chicago Police Department is investigating charges a cop advised a man how he could shoot his neighbor legally.
■ A Cook County jail detainee escaped after disguising himself as another guy who was supposed to be released.
■ Burglaries across the nation are down during the pandemic.

This means war. The union representing newsroom employees at the Tribune and its sibling papers across the country is pushing to unseat a couple of corporate board members representing the company’s largest shareholder, the vampiric Alden Global Capital (February link).
■ Meanwhile, The New York Times reports it gained almost 600,000 new digital subscribers in the first quarter.
■ Harvard journalism-watcher Joshua Benton: “I hope this kills the idea that putting coronavirus news outside the paywall means you’re costing yourselves new subscribers.”


Clarification. Yesterday’s Square inadvertently included a December item about the resignation of the City Club’s president. It wasn’t news, but it had been newly re-shared by WBEZ staffers as part of the station’s appeal for listener support. Thanks to reader Mike Dessimoz Judy Graf for the catch. We hate making mistakes, but we love readers who help set the record straight.