‘Kind of crazy.’ As a chorus of Illinois Republicans protests Gov. Pritzker’s handling of the COVID-19 pandemic, he’s dismissing the suggestion he’s not listening to the state’s minority party.
■ The governor’s plan to “Restore Illinois” leaves Chicago’s convention industry up in the air.
■ Chicago-area movie theater owners are scratching their heads, too.

Wearing a mask while black. Illinois State Rep. Kam Buckner, who’s supported Pritzker’s executive order requiring people to wear masks in most public settings, says a cop stopped him for no apparent reason as he shopped.
■ Buckner on Twitter: “COVID will not break us. It will only reveal to us what is already broken. There’s a lot to be fixed.”
■ Riding the CTA, columnist Irv Leavitt encountered a little boy whose mother had seemingly “failed the impossible challenge” of getting him to wear a mask that covered his mouth and nose.
■ Mayor Lightfoot is sounding the alarm about a “breathtaking” doubling of COVID-19 cases in Chicago’s Latino community over the last four weeks.

‘If you don’t like the data, you can just change it.’ Wonkette’s Liz Dye says Arizona’s governor has joined “the long list of Republican governors juking the stats to make it seem like, actually, opening up their states and getting lots of their citizens killed is a really good idea.”
■ Something fishy’s been going on with Florida’s coronavirus data website. 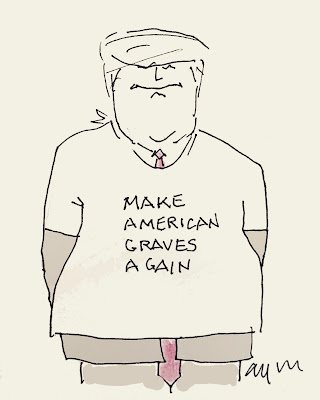 ■ A detailed federal blueprint for reopening the nation, prepared by the Centers for Disease Control and Prevention, has been buried by the Trump administration …
■ … apparently because President Trump wants a quick reopening, even though one of the studies his administration is relying on suggests that spells disaster. (Cartoon: Keith J. Taylor.)
■ McSweeney’s: “Even though the velociraptors are still on the loose, we will be opening Jurassic Park back up to the public!”

‘Thinkihadititis.’ The Washington Post’s Maura Judkis: “No one wants to have COVID-19, but everyone wants to have had it.”
■ The New York Times: Genetic tracking suggests New York City has been the primary source of new COVID-19 infections in the U.S.
■ NPR’s interactive snapshot compares your state’s coronavirus testing to others’—and finds Illinois still far short.
■ The Sun-Times’ Neil Steinberg: “Diagnostic labs setting up white tents in church parking lots is a hint the medical system isn’t working.”


Blue notes. A GoFundMe campaign aims to put checks in the hands of Chicago’s idled blues musicians.
■ A conversation translated from Polish—“What the f— is this, since the morning they’re talking about this corona sh—, a—holes”—contributed to the federal indictment of two men accused of running a struggling suburban prostitution ring.
■ Nieman Marcus is filing for bankruptcy.

‘It’s not a bad idea to eat mostly other things.’ Grub Street’s Alan Sytsma offers counsel for surviving a meat shortage.
■ Chicago-area restaurant owners and farmers—with their counterparts around the world—are remaking their businesses for a new world.

‘Completely unacceptable.’ The FCC is leveling its largest fine ever against Sinclair Broadcast Group for misconduct in its failed attempt to merge with WGN-TV and Radio owner Tribune Media …
■ … a deal that threatened to launch a national Trump-friendly TV company to rival Fox News.
■ PolitiFact: What Trump got wrong in an interview with ABC News’ David Muir …
■ …who’s under fire for delivering a softball session: “I don’t know how you get an interview with the president and not make news.”
■ Trump critic George Conway—who, remarkably, remains married to White House counselor Kellyanne Conway—condemns the president as “so self-obsessed, he can only act for himself, not for the nation.”
■ Trump’s war on government has reached the highest level of the U.S. Postal Service.
■ Trump’s education secretary has expanded the rights of alleged K-12 and college rapists.

Fork off. Chicago’s Pitchfork Music Festival is dead for this year.
■ This month’s Monet exhibit at the Art Institute has been postponed indefinitely.
■ First-birthday video of Meghan Markle and Prince Harry’s son Archie shows her reading him the book Duck! Rabbit!, co-authored by late Chicago author Amy Krouse Rosenthal and likely given to Archie by Oprah Winfrey.
■ A 1993 Simpsons episode nailed 2020 in at least two ways. 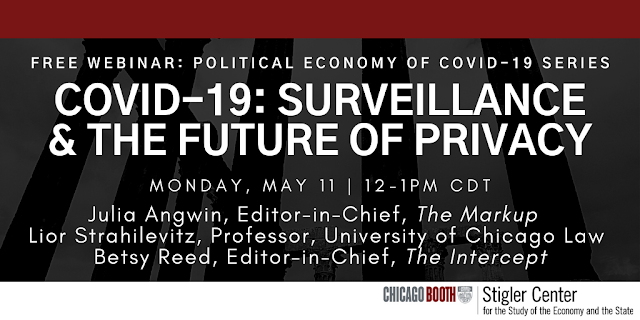 The Stigler Center for the Study of the Economy and the State is a Chicago Public Square advertiser.
Correction corrected. Yesterday’s mea culpa inadvertently credited the wrong wonderful Square reader for flagging a problem with Tuesday’s edition. Thanks and an apology to Judy Graf, who should have gotten credit for the catch. Reminder: Square is a glutton for corrections. Write anytime.
■ Thanks to Joe Hass and Chris Koenig for making this edition better.