Chicago Public Square is honored to win this year’s Chicago Headline Club award for Best Blog (Independent). At the bottom of this edition, you can learn how to support other talented independent journalists doing essential work across the Chicago area. And now, the news:

‘Everyone should be disturbed.’ CNN’s Brian Stelter assesses an appalling video of a reporter getting harrassed by anti-lockdown, pro-Trump protesters—behavior that he says the president has modeled. 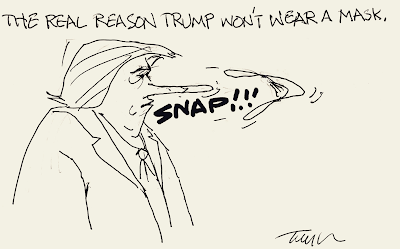 ‘You are constantly looking over your shoulder.’ The Washington Post explores the fear among Americans returning to work of bringing the virus home.
■ Bloomberg: “Thousands of COVID-19 ‘heroes’ are about to get a pay cut.”
■ Vox: “Companies are giving essential workers bullshit rewards.”
■ DePaul University students are suing for tuition refunds.
■ The University of Illinois’ president warns that campus life—especially football—won’t return to normal in the fall.

‘Worse and weirder than anything I’ve ever seen.’ An economist helps The New Yorker explain how the coronavirus is killing the middle class.
■ Politico: COVID-19 stands to accelerate an exodus from Chicago and other big cities—and don’t count on a pandemic-driven baby boom.
■ The New York Times: As the coronavirus hit New York City, the richest neighborhoods emptied out most.
■ A Tribune analysis of Chicago’s crime and pandemic data finds the highest infection rates in communities with high crime rates.

Phase 3 nears. Gov. Pritzker says the Chicago region is on track to move by the end of the month to the next step of his reopening blueprint.
■ Better Government Association chief David Greising praises Pritzker as “an elected official who has learned the data, developed good judgment and set his plan.”
■ Naperville’s park district is going to court to block Pritzker’s shutdown order.
■ When the CTA’s business picks up again, don’t expect your commute to look the same.
■ Good Morning America looks ahead to just how different gyms will look when they reopen.
■ Berkeley, California, is planning to close streets to give restaurants room to expand outdoor dining.

Area’s youngest casualty. A 12-year-old boy has become Cook County’s youngest known confirmed COVID-19 victim.
■ Sun-Times columnist Mark Brown: “What if he’s just the first child to die as the disease continues to spread … as we accommodate the desires of those who want to visit their favorite bars and restaurants?”
■ A suburban hospital nurse is in the hot seat after reveling without a mask in a packed and reopened Milwaukee-area bar.
■ A New York barber who defied the lockdown to cut hair now has COVID-19.
■ Clarifying an item in yesterday’s Square: Although Cook County now has passed New York’s Queens County for most coronavirus cases, it still has a lower rate per person.

Not so fast. Illinois-based Abbott’s ballyhooed “rapid test” for COVID-19 is proving not all that reliable.
■ A shortage of tests has brought curbside checks in Chicago to a halt.
■ Among the missing from TV news talk shows lately: The government’s top health experts.
■ Want to see how easily COVID-19 can spread? Watch this video.

‘The demolition will not move forward.’ After protesters showed up outside her home, Mayor Lightfoot canceled more deconstruction work at the defunct Little Village coal plant whose botched demolition last month covered the neighborhood in dust.
■ Pollution is fading from the skies over locked-down cities around the world—but not so much in Chicago.

Unhappy birthday. A day after the Adler Planetarium celebrated its 90th anniversary, it laid off 120 employees.
■ The Goodman Theatre has postponed the rest of its season.
■ The Trib is going to furlough newsroom workers who make $40,000 a year or more—and their union considers that a victory. 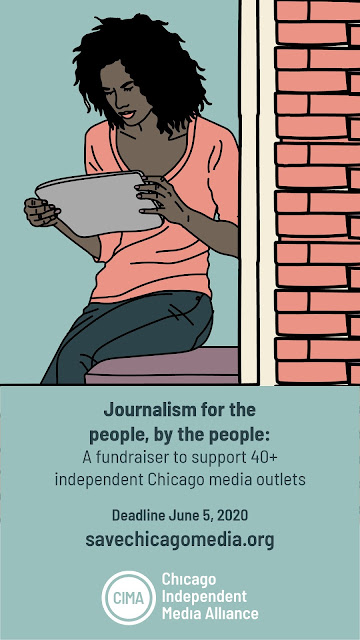