‘The water has nowhere to go.’ After another round of relentless rain, Chicago remained under a flood watch through this afternoon.
■ The Metropolitan Water Reclamation District reversed the Chicago River’s flow (again), dumping sewage into Lake Michigan to avoid sending (more of) it into people’s basements.
■ Firefighters used boats to rescue the homeless from flooding under Wacker Drive …
■ … and to evacuate residents of at least one suburb, too.
■ Also there were tornadoes.

Getting-together tips. As states move to relax COVID-19 lockdowns, an epidemiologist who also happens to be immune-compromised offers common-sense counsel for reconnecting with family and friends.
■ CNN’s Dr. Sanjay Gupta spells out the advice he’d provide “if the United States were my patient.”
■ Europe is reopening widely today …
■ … but with restrictions and masks aplenty.
■ PolitiFact: Under everyday circumstances, gloves don’t help—and can make things worse.

Not so good. Under a newly toughened rating system—and warmer weather—Cook County’s grade for social distancing has plummeted from an A to a D.
■ Several churches aren’t helping.
■ Sun-Times columnist Laura Washington: “The state’s confusing web of rules provides that churches stay closed, yet every day … less sacred places … welcome visitors and commerce.”
■ Past pandemics have shaped American cities for the better.

Glitch-slapped. The overmatched Illinois Department of Employment Security concedes a malfunction in its new online claims system exposed applicants’ private information.
■ Pritzker has created a new tier of punishment for businesses that ignore his shutdown orders.

Meanwhile in Wisconsin … Politico’s Shia Kapos says that, as that state’s stay-home restrictions expired, Illinoisans flocked across the border to—and failed to keep their distance within—Kenosha’s celebrated roadhouse, the Brat Stop.
■ An Illinois man visiting Lake Geneva, Wisconsin, with his wife concedes Pritzker’s in a bind: “If he opens and people get sick, they will blame him. If he doesn’t open soon, businesses will blame him for putting them out of business.”
■ PolitiFact assigns a “False” rating to Illinois Congressman Darin LaHood’s claim that “93% of the [COVID-19] cases in the state of Illinois have come from Chicago.”

Dogged investigation. The State Department inspector general President Trump fired under cover of Friday was generally inspecting reports Secretary of State Mike Pompeo made a staffer take care of personal crap like picking up his dry cleaning, making dinner reservations for Pompeo and his wife, and walking their dog. 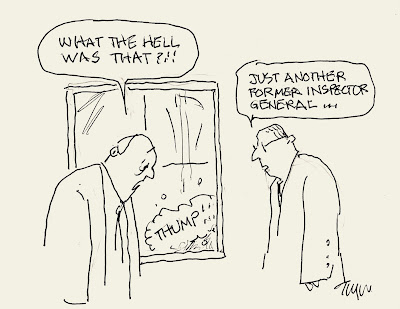 Sears suckers. A ProPublica/Daily Herald investigation details how the largest tax break package ever awarded to a company in Illinois—a 1989 deal for Sears, Roebuck & Co.’s suburban headquarters—not only failed to turn Hoffman Estates into a boomtown, it also triggered revenue shortfalls, disappearing jobs and unexpected tax burdens …
■ … not to mention a white elephant of an entertainment arena.

Alderman sprung. The coronavirus crisis has given thrice-convicted ex-Chicago Ald. Ambrosio Medrano a get-out-of-jail (but-be-confined-to-home) card.
■ A developer who went to jail for his role in Illinois corruption scandals stands to profit from the pandemic. 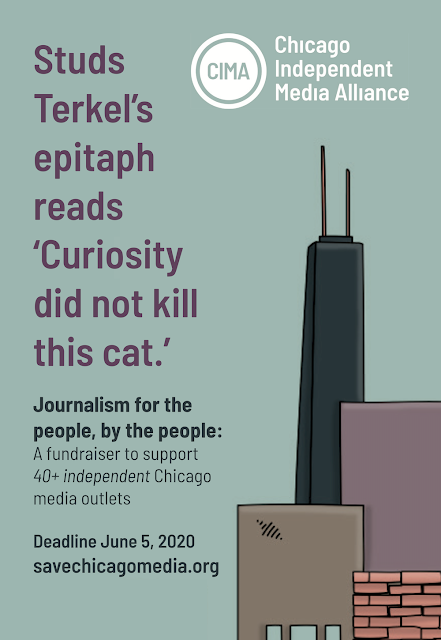 Thanks, Pam Spiegel, for reminding Square how to spell Sanjay.