‘Balls to the walls.’ State Sen. Martin Sandoval has pleaded guilty to corruption charges—among other things conceding he’d taken a “protector fee” to go all-out as head of the Illinois Senate Transportation Committee and do “anything you ask me” to protect the SafeSpeed red-light camera company.
■ The Tribune says the plea deal “laid bare a striking level of greed.”
■ A Trib editorial: This and other corruption cases merit attention today in Gov. Pritzker’s State of the State address …
■ … which you can watch and listen to live at noon. 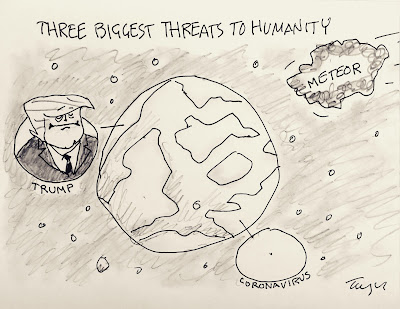 No laughing matter. CNN host Don Lemon’s hysterical outburst of laughter at guests’ mockery of Trump and his supporters is providing viral fodder for the president—and is, according to Poynter critic Tom Jones, “not a good look for Lemon” and “an even worse look for CNN.”
■ The Tribune’s Mary Schmich recaps the president’s impeachment daze: “Soon this will be over / And I’ll still be on the throne / I’ll win again and yet somehow / I’ll still be all alone.” (Cartoon: Keith J. Taylor.)

Coronavirus alert. Northwest Indiana doctors are keeping watch over a person who may have contracted the disease.
■ Chicago’s architectural firms are feeling the pain of China’s coronavirus outbreak.

‘Toxic soup of chemicals.’ Three flight attendants are suing Boeing, contending its airplanes subjected them to pollution that seeped in through a design flaw.
■ Boeing last year suffered its first annual loss in more than 20 years.
■ The parent company of Blue Cross of Illinois is cutting about 400 workers.
■ Horizon Therapeutics is moving more than 500 employees from Lake Forest to Deerfield.

Scooter resurgence. Chicago’s going to give its electric scooter pilot another spin this year.
■ Chicago’s “World’s Largest Block Party” will be no more.

Say, can you see? Cook County is seeking a new design for its mediocre flag.
■ For the first time in 33 years, the Adler Planetarium has a new telescope.

What Facebook knows. The company is offering you new insight into—and a little more control over—what it knows about what you do when you’re not using Facebook.
■ Privacy advocates are calling foul about Chicago cops’ use of a facial recognition tool that scans billions of photos from Facebook and other sites.

‘The drawback of cooking up fake tragedy to hype your legume.’ Neil Steinberg considers Planters’ unfortunately timed decision to kill off its mascot, Mr. Peanut.
■ The Washington Post has reinstated a reporter suspended after tweeting about Kobe Bryant’s sexual assault history in the hours after his death.

Journalism Town Hall. Eleven years later, the conveners of the original Chicago Journalism Town Hall have set a time, date and location for the sequel—during which “a group of big thinkers and decision-makers in Chicago’s media and journalism constellation discuss the challenges they face.”
■ Sign up for free tickets here.
■ The Wall Street Journal: Warren Buffett’s Berkshire Hathaway “is giving up on newspapers.”
■ The Guardian is banning advertising from fossil fuel companies.
■ Poynter’s Kelly McBride ponders: Do journalists damage their reps when they vote in political primaries?

Thanks to Chris Koenig for suggestions that made this edition better.