Assassination or not? One reason you’re seeing headlines that blandly refer to the U.S. killing of Iranian military leader Qassem Soleimani as, for instance, a “drone strike”—and not an illegal assassination—is that U.S. law doesn’t define “assassination.”
■ The director of the Center on National Security at Fordham University Law School boils down the Trump administration’s position this way: “It’s not war, it’s just the way we’re doing business these days.”
■ Veteran Chicago political strategist Don Rose: “There are good reasons why both the Bush and Obama administrations considered it too provocative to execute the man.”
■ The U.S. expects a “tit-for-tat” attempt on the life of an American military commander … 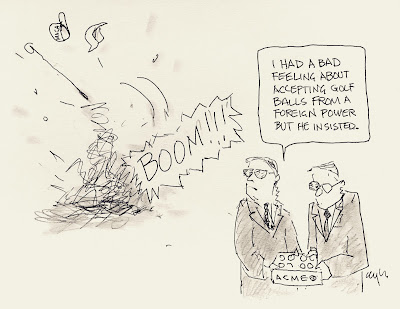 ■ … and/or maybe some attacks on Trump-owned properties. (Cartoon: Keith J. Taylor.)
■ The killing has triggered a journalistic crisis: How to spell the victim’s name in English. Chicago Public Square is following AP style, as above. CNN and The Washington Post drop one s in the first name, and The New York Times goes with Qassim Suleimani.

Amazon’s suburban bet. With little—if any—public notice or debate, Amazon has managed to build a massive distribution complex on the site of the old Maywood Park horseracing track.
■ Bridgeport’s Ramova movie theater—an empty place for more than three decades—could be reborn as a dining, music and brewery hub.

Mayors OK with banning abortion. A coalition of 28 mayors planned today to endorse the reelection of a congressman representing their towns, Dan Lipinski—who’s under fire for joining Republican lawmakers pushing the Supreme Court to reverse its decision legalizing abortion.
■ A couple of dozen protesters—some dressed in Handmaid’s Tale red—gathered outside Lipinski’s office Monday.

For the death of a child … Ikea has agreed to what may be a record settlement: $46 million to the parents of a toddler killed when one of the company’s dressers fell on him.
■ Pier 1 is closing almost half its stores.

‘It is banal now.’ A shopper bemoans the genericization of Chicago’s once-beloved Mariano’s grocery store chain.
■ Borden, one of the country’s oldest and largest milk producers, has filed for bankruptcy …
■ … partly because you’re buying more oat, nut, soy and other alternative products.

Moor fun. Navy Pier’s in line for Lake Michigan’s first “transient” marina, offering boaters hourly, daily and weekly harbor.
■ Chicago’s Uber, Lyft and Via drivers may be feeling the hurt from Mayor Lightfoot’s new “congestion fee,” which piles an extra couple of bucks on the price of a hailed ride.

Chicago Public Square is free—thanks to support from enthusiastic fans. You can be one of those supportive readers by joining The Legion of Public Squarians.