Chicago Public Square will take a few days off. Back Monday, Dec. 30. Meanwhile, get the latest via the Square Facebook and Twitter accounts. And now the news:

Pelosi’s power play. In a surprise move after last night’s impeachment of Donald Trump, House Speaker Nancy Pelosi suggested the House might not send the matter to the Senate until she feels it’ll get a fair hearing there …
■ … an unprecedented move that at least forestalls the prospect of a rigged trial.
■ Pelosi glared at those who clapped after one vote. 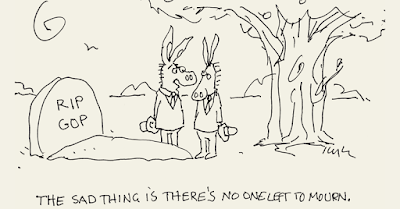 ■ The New York Times’ David Leonhardt reflects on Republicans’ defenses of the president: “It was like bad satire.” (Cartoon: Keith J. Taylor.)
■ How other nations’ news organizations reacted.
■ On the streets of Chicago, mixed feelings.
■ The Tribune’s Rick Pearson: The Illinois delegation’s vote makes impeachment a hot issue for next year’s elections.

Democratic dukes up. PBS and Politico host tonight’s next clash between presidential contenders—to begin at 7 p.m. Chicago time.
■ It’ll be the 2020 campaign’s smallest, whitest field of candidates so far.
■ FiveThirtyEight: “Who Has The Most To Gain Or Lose?”

Debate ‘as dramatic as anyone has seen in years.’ Politico’s Shia Kapos recaps the Chicago City Council’s decision not to delay the sale of recreational pot in Chicago past Jan. 1.
■ Steve Rhodes in The Beachwood Reporter: “The goal is to cripple Lightfoot early—and every day to the extent possible—and make her a one-term mayor.”
■ Aldermen have approved a ban on aldermen lobbying state and local governments.

Naperville, repentant. Following a rash of race-related embarrassments, one of Chicago’s biggest suburbs has revised its mission statement to include “creating an inclusive community that values diversity.”
■ Gov. Pritzker’s signed a law that could generate or save billions of dollars: Consolidation of hundreds of suburban and downstate police and firefighter pension funds into just two.

Holy comedown, Batman! Chicago’s embattled top city lawyer is surrendering his pass to use the city’s private road (known as “the Batcave”) connecting McCormick Place and downtown.
■ From 2012, a brief radio trip along that road.

‘Hospital of horrors.’ Cook County’s public guardian has filed suit against a Chicago psychiatric facility, alleging that kids were beaten and sexually abused while in state custody there.
■ “DCFS did nothing to protect the children.”

‘Spies in their pockets.’ A huge trove of data leaked to The New York Times reveals that mobile phone location technology has left Americans with “zero privacy.”
■ USA Today: … and yes, your phone really is listening.
■ Apple, Google and Amazon are teaming up to standardize how “smart home” devices work together.

Passwords With Enemies. Zynga, the company that owns Words With Friends, concedes more than 170 million usernames and passwords have been stolen.
■ See if your email address has been compromised by checking haveibeenpwned.com …
■ … and then see if your password is out there. 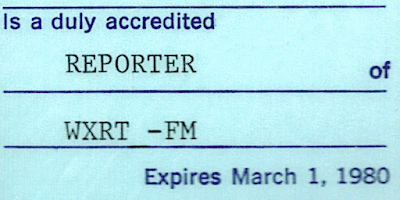 R.I.P., WXRT News. WXRT-FM—where your Square publisher worked for a decade—has cut its last standing newscaster, Mary Dixon …
■ … and it’s shuffling its DJ lineup, moving longtime morning host Lin Brehmer to middays.
■ WXRT News veterans reflect on the end of an award-winning run: “Without the news, it will be just another radio station.”
■ Meanwhile: “Hundreds of ‘pink slime’ local news outlets are distributing … conservative talking points”—and their roots grow out of a scandalized Illinois company (2012 link).

Lampoon redux. The National Lampoon Radio Hour—1970s inspiration and source of talent for Saturday Night Live—is back as a podcast.
■ From 1987: An unedited interview with the Lampoon’s founding publisher.

0 stars. The new movie Cats gets a stunningly lousy review from the Trib’s Michael Phillips.
■ The Sun-Times’ Richard Roeper says Bombshell, a fictionalized account of Fox News’ #MeToo scandal, “is one of the best-cast movies of the year.”

If you’re gonna long for Chicago Public Square over the next week or so, please know your support can help stamp out Square hiatuses. And through Dec. 31, you can pledge at an unprecedented discount.