Whistle blown. Congress has released an intelligence community member’s complaint that White House officials were alarmed after witnessing President Trump “abuse his office for personal gain” in a phone call—records of which the administration proceeded to “lock down.”
■ Read the whistleblower’s complaint: “I have received information … that the President of the United States is using the power of his office to solicit interference from a foreign country in the 2020 U.S. election.”
■ Updating coverage: Acting Director of National Intelligence Joseph Maguire tells Congress the complaint alleged serious wrongdoing by the president …
■ … and laid out a case Maguire considers “unique and unprecedented.”
■ See video of Maguire’s testimony.
■ The New York Times’ David Leonhardt on release of the “transcript” the administration had suppressed: “If White House aides thought it would slow the momentum toward impeachment, they miscalculated.”
■ Politico advises “How to read Trump’s wild phone call with Ukraine’s president.”
■ The New Yorker’s Susan B. Glasser: The 48 hours that sealed Trump’s impeachment. 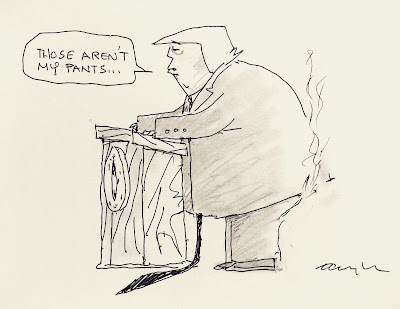 ‘The Illinois Exodus appears to be the fraud many of us suspected it was.’ The Beachwood Reporter’s Steve Rhodes turns a critical eye on reports people are leaving the state because of high taxes.
■ Fair-housing advocates blame aldermanic clout for Chicago segregation and they want Mayor Lightfoot to end its role “as the sentry of Chicago’s color lines.”
■ Wednesday in Chicago: Two people were killed and 10 were shot across the city.

‘His actions elevated him from being a racist jerk, to a hate crime.’ A jury has convicted a man caught on video abusing a woman who was wearing a Puerto Rican flag shirt.
■ See the video.
■ He faces sentencing next month.

‘Should I have said it? No. Probably not. But ... I don’t have anything to apologize for.’ A Chicago alderman isn’t distancing herself from profanely enthusiastic remarks at a Chicago Teachers Union rally.
■ An editorial from the Sun-Times, which is partly owned by the Chicago Federation of Labor: “The Chicago Teachers Union should accept the latest offer from the Board of Education, a sweet deal that most Chicagoans would love to get.”

‘No, there wasn’t someone waiting for you to subscribe.’ Engadget explains the Federal Trade Commission’s lawsuit against the online dating service Match Group.
■ From WBEZ in 2013: That time your Square publisher found himself wrongly signed up for Match.com.

Hyphen nation. After an about-face by The Associated Press, forgive journalists if they’re confused about what to hyphenate and what not to hyphenate.
■ Slate: “Why grammar nerds keep getting so furious … and why they’re wrong.”
■ But it’s still just one space after a period.