More shots, sooner. What’s left of the federal government has come around to the incoming Biden administration’s way of thinking: Get COVID-19 vaccines now to people age 65 and over and those under 65 with high-risk health conditions—and don’t hold out shots for a second dose.
■ At least two Democratic representatives locked up with defiantly maskless Republicans during the assault on the Capitol now have tested positive for COVID-19.
‘He will remain a threat …’ Updating coverage: The House has fast-tracked a four-page bill of impeachment against Donald Trump.
■ PolitiFact: “The House has the ability to … super-charge the process.”
■ The Washington Post: “Six hours of paralysis: Inside Trump’s failure to act after a mob stormed the Capitol.”
■ Also from the Post: What went wrong between Trump and Vice President Pence.
‘Terrifying plots.’ Amid widespread silence from federal authorities since Trump supporters’ riot, Capitol Police nevertheless have reportedly briefed Democrats on potentially deadly plots against Congress this week—including a plan to encircle the building and assassinate lawmakers.
■ The FBI is warning all 50 states about protests in the days ahead at their capitals …
■  … including Springfield.
■ Six education experts suggest what schools should teach kids about the Jan. 6 siege.
■ New York Times critic James Poniewozik: “The Attack on the Capitol Was Even Worse Than It Looked.”
■ Stephen Colbert: It was worse than 9/11, because “no Americans were cheering for the terrorists back then.”
‘He’s the greatest president we’ve ever had.’ The Tribune had no trouble finding Chicago-area voters who stand by Trump.
■ But, across the country, at least some Republicans are dumping their party affiliation.
■ Republican sugar daddy and casino magnate Sheldon Adelson is dead at 87.
■ Actor/comedian Michael Ian Black: “Just grateful he lived long enough to see the people and movement he financed totally disgraced.”
■ Banks have been pulling the plug on their Trump family business.
■ Chicago-area billionaire Dick Uihlein—of the Uline business supplies company—gave millions to the group responsible for the rally that spawned the insurrection.
■ Following a protest petition, Harvard is dumping vote-fraud conspiracy champion and New York Republican U.S. Rep. Elise Stefanik from its Institute of Politics senior advisory committee.
‘Just because I destroyed federal property, put the lives of members of Congress at risk and engaged in an attack that led to the death of a police officer, I’m the one who has to face consequences?!?’ Trib columnist Rex Huppke channels “a patriotic supporter of President Donald Trump” … 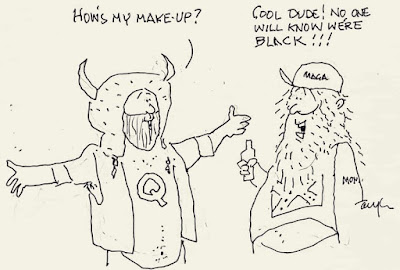 ■  … and, it turns out, an actual participant in the rally riot doesn’t sound much different. (Cartoon: Keith J. Taylor.)
■ CNN is tracking the federal criminal arrests arising from the pro-Trump rally riot …
■  … including that shirtless guy with the horns.
■ The Onion: “FBI Narrows Down Identity Of Red-Faced Man Carrying Confederate Flag Through Capitol To Millions Of Americans.”
Parler pooped. Archivists and hackers have preserved and shared to the public web virtually every post to the radical Twitter challenger Parler—including location data …
■  … which could prove helpful in investigations of crime at the Capitol.
■ BBC News: “ If you ever needed proof of the power of ‘Big Tech’ then the downfall of Parler … is a good place to start.”
■ At least 70,000 accounts linked to the lunatic QAnon movement have been blocked on Twitter—many of them controlled by a single person.
■ Twitter’s blog: “These accounts … were primarily dedicated to the propagation of this conspiracy theory.”
■ Facebook is warning its employees to avoid wearing Facebook-branded clothing.
School bells ringing. Chicago’s schools reopened Monday …
■  … as the school system warned teachers who failed to report today that it would dock their pay and block their online classroom accounts …
■  … and as at least one teacher tested positive for COVID-19, forcing a principal and others into quarantine.
Trib exits. Three years after abandoning its historic tower, the Chicago Tribune team is leaving downtown altogether—departing Prudential Plaza and moving all operations to its printing plant near Chicago and Halsted.
■ A parade of the paper’s prominent reporters and columnists taking buyouts continues—now including restaurant critic Phil Vettel and Cubs reporter Mark Gonzales (cited further down in Robert Feder’s media news roundup).
‘We can honor him by playing the game he loved.’ Opening a show taped in October November, all-time champion Ken Jennings on Monday became the first host of Jeopardy! since Alex Trebek’s death.
■ The Onion again: “Jeopardy! Producers Regretting Making Every Answer Of Memorial Episode ‘Alex Trebek.’”
■ Pandemic? What pandemic? Netflix plans to deliver new movies every week this year.
Don’t step on his steps. A new law protects human artifacts on the moon, including Neil Armstrong’s historic first bootprint.
■ NASA reports detection of an FM radio signal emanating from a moon of Jupiter.
Chicago Public Square is free for all thanks to the support of a few. You can join them with a one-time tip or a continuing pledge. 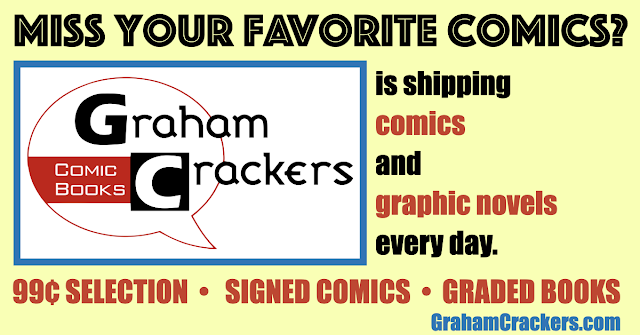 Graham Crackers is a Chicago Public Square advertiser.
Thanks to Pam Spiegel and Gretchen Feld for making this edition better.
Email ThisBlogThis!Share to TwitterShare to FacebookShare to Pinterest
← Newer Post Older Post → Home