Towering trouble. Chicago’s tallest building, Willis Tower, was still without power today after floodwaters got the best of its lower levels and a ComEd substation …
■ … crippling broadcasts by several radio and TV stations …
■ … including CBS 2 Chicago—which had other problems as technical glitches compounded by COVID-19 pandemic staffing shortages kept the network’s CBS Evening News off the air.
■ With 11 days to go, May is already Chicago’s wettest on record.
■ Floodwaters also threaten an architectural Fox River landmark, the Farnsworth House.
■ In Midland, Michigan, thousands have been evacuated ahead of floods that the governor says could put downtown—including Dow Chemical Co.’s main plant—under 9 feet of water.

Lakefront hope. Mayor Lightfoot says she expects to see Chicago’s shoreline parks reopen to the public at some point this summer.
■ Gov. Pritzker says all regions of Illinois are “on track” to move to the next phase of reopening.
■ A University of California political philosopher worries about society’s ability to keep memories of this time alive as a guide for generations to come.

Mask menace. A showdown loomed in Springfield as lawmakers returned for the first time in months and at least one Republican threatened to ignore a proposed House rule that everyone wear masks. 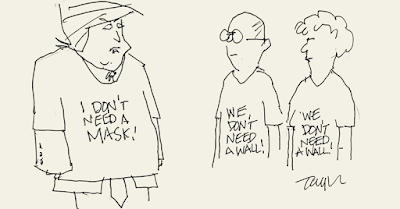 ■ At yesterday’s gubernatorial news briefing, University of Chicago Medicine chief infectious epidemiologist Dr. Emily Landon said this of wearing masks: “Soon, I promise, it will be as natural as wearing pants—which most of us are pretty good about.” (Cartoon: Keith J. Taylor.)

‘Don’t be stupid, don’t follow Willie Wilson.’ N’digo magazine publisher and self-described “holder of a gold Black card with a rich legacy” Hermene Hartman issues a warning to the community about mask-nanimous U.S. Senate candidate Willie Wilson, “a self-made millionaire with a very special brand of politics.”
■ More than $1 million is headed to South and West Side communities for summer programs aimed at minimizing gun violence.

Mariano’s next act. Bob Mariano, who ran the Dominick’s grocery store chain before launching his eponymously named stores (now owned by Kroger), is re-teaming with the Dominick’s family to launch a new chain: Dom’s Market & Kitchen.
■ Pier 1 is set to disappier.
■ The coronavirus may be ringing the death knell for coins and paper money.

Thanks, pandemic. In a move that could signal the onset of an auto insurance price war, State Farm—which previously issued one-off refunds to its customers—says it’s further cutting rates by about 11 percent because people are driving so much less.
■ People who are still driving in Chicago face a new headache where the Eisenhower meets the Kennedy.

Hail, the pizza heroes. Sun-Times columnist Phil Kadner honors piemakers “on the front lines, like nurses, doctors and Walmart employees.”
■ Eater Chicago is updating a list of Chicago restaurants that won’t reopen after the pandemic.
■ Indiana’s acclaimed Three Floyds brewpub is down for the count.
■ Food halls are f**ked.

Baby powder out. Amid thousands of lawsuits blaming it for cancer, Johnson & Johnson’s talc-based powder will no longer be sold in the U.S. and Canada.
■ As Lincoln Park neighbors celebrate the shutdown of the polluting General Iron recycling plant, scrappers are scrambling to find a place for their stuff.

Song of the day. Parodist Randy Rainbow has a new one: Distraction!
■ Yes, “Rainbow” truly is his given name (2019 link).

Square mailbag. A reader who prefers to remain anonymous writes in response to yesterday’s edition: “Many, many people take hydroxychloroquine for immune-related disorders on a daily basis. Personally, I’ve had it prescribed to me a number of times over the last 30 years and I’m happy to say I’m still alive and kickin’. Many medications have side-effects that may cause irreversible damage or be possibly fatal. You want to be careful how much and for how long you take acetaminophen for example. The emphasis on the word fatal in today’s email isn’t appropriate and needs to be re-examined. … It’s one thing to state it may not be of value to people seriously affected by the coronavirus; it’s another to imply people are taking their life in their hands. That risk exists with any medication and has to be assessed by both the medical provider and the patient.”
■ Thanks, Mike Braden, for the reminder that appositive phrases take two commas.