‘Dead wrong.’ Gov. Pritzker slams a Tribune editorial criticizing his cautious plans to reopen.
■ A North Side church gave Pritzker’s orders a middle finger with Sunday services attended by a couple of hundred people.
■ Two suburban sisters who returned home from college to find both parents ill—and soon to be in critical condition with COVID-19—report the couple’s on the mend.
■ New evidence supports theories that warmer weather can crimp COVID-19’s spread.

‘A shameful, murderous proposition.’ David Rutter objects to Tribune columnist John Kass’s defense of “those of us who want to get the country back to work” (second item in The Beachwood Reporter).
■ Illinois’ struggling unemployment assistance program finally will let gig workers apply for benefits.
■ The Wall Street Journal (behind a paywall) on what a return to work will look like: “The corporate cafeteria is closed. The coffee makers are unplugged. And the desks are separated by plastic.”
■ In Chicago, the Trib reports, you can expect “the most dramatic changes in big commercial buildings in nearly two decades.”
■ The pandemic has claimed a beloved Chicago “greasy spoon,” dead at 57.

Pence’s plans. Updating coverage: Reversing an earlier statement, Vice President Pence planned to return to the White House today, even though one of his aides tested positive for the coronavirus. 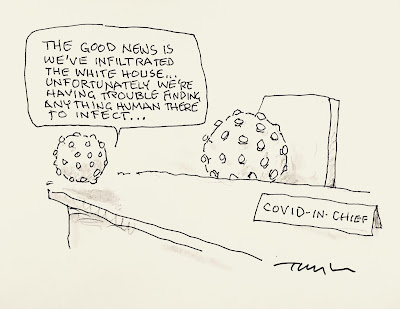 ■ CNN: As the virus edges closer to the president, an insider acknowledges the contradiction between “telling states to reopen while the White House enhances protocols to prevent the spread of the coronavirus.” (Cartoon: Keith J. Taylor.)

Fire defeats frying pan. Chicago police have voted to replace union chief Kevin Graham (whom you may remember as the only local official to greet President Trump at O’Hare in October) with a guy Trump apparently likes even better: Avowed MAGA guy and police officer with a history of bigoted behavior John Catanzara.
■ The coronavirus outbreak at Chicago’s Metropolitan Correctional Center is one of the biggest in the federal prison system.
■ A Cook County correctional officer is dead after being diagnosed with COVID-19.

Late-night silence. The Daily Beast’s senior entertainment editor sees a double standard in Colbert’s, Kimmel’s, Meyers’ and Noah’s failure to address sexual assault allegations against Joe Biden.
■ Trump’s campaign app is “Candy Crush for MAGA-land.”
■ Politico’s Bill Scher: “Biden sucks at digital media. So what?”
■ Sun-Times columnist Laura Washington: Biden should pick Sen. Kamala Harris as his running mate.
■ The Atlantic: A security hole a college student spotted in the Chicago Board of Elections website spotlights how Russia can take what it did to the U.S. in 2016 to a new level this year.

Pets’ plight. As people struggle without paychecks, animal shelters are bracing for an influx of pets that owners can’t afford to care for.
■ Anyone want an Abyssinian guinea pig?

Rest in serenity now! Comedian Jerry Stiller, well-remembered as George Costanza’s hair-trigger dad on Seinfeld, is dead at 92.
■ See a 2010 interview with Stiller and his (also now deceased) wife and comedy partner Anne Meara.
■ Saturday Night Live’s season finale ended with a tear-jerker.
■ Now on Netflix: A nonfiction anthology about the intersection of news and true crime, including a finale that focuses on what Trib critic Michael Phillips calls “the rise, fall and nutty legal saga of former Illinois governor Rod Blagojevich.”

Song of the day. Get Down With It, by Little Richard …
■ … one of at least three R&B legends to die over the weekend.
■ His breakthrough hit came outta Chicago. 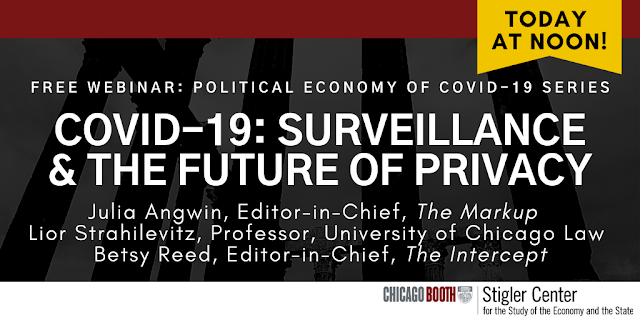 The Stigler Center for the Study of the Economy and the State is a Chicago Public Square advertiser.

Thanks, Pam Spiegel, for a reminder that Anne Meara’s first name ends with an e.