How it spreads. A federal postmortem details, step by step, how a Chicago man in February hugged and shared meals with people at a funeral and then again at a birthday party, unwittingly passing the coronavirus to as many as 15 people—three of whom died … 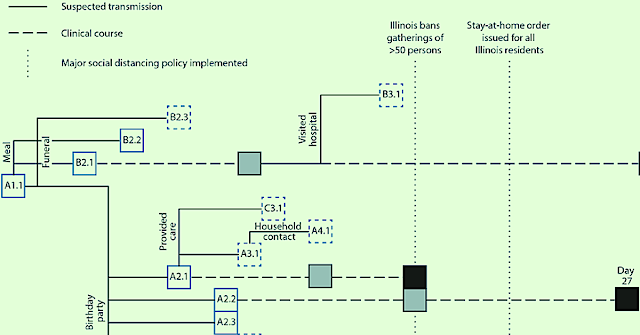 ■ … demonstrating why going to church on Easter is a bad idea.
■ New research suggests people exercising outdoors should stay even farther apart.
■ The World Health Organization says the virus may spread from humans to pets—but not apparently the other way.
■ For the first time in its history, Chicago Animal Care and Control exhausted its supply of adoptable dogs and cats.
■ Infectious disease and food safety experts tell NPR takeout food is safe—but cooked food is safer than uncooked.

‘I’m really, really going to miss seeing people smile.’ In a personal post to Facebook, Tribune editorial board member Lara Weber describes choking up after a shopping trip to Trader Joe’s.
■ The Sun-Times’ Mark Brown details the pain of a family whose patriarch “had to die alone.”

‘People … have been dropping dead at home.’ The Daily Beast reports New York’s “unfathomable” toll will leap as the city begins tallying hundreds of body bags removed from houses—in numbers up to 10 times a typical pre-COVID-19 day.
■ The Washington Post (in a paywall-free article): Yeah, the coronavirus is more deadly for older Americans, but it’s killed hundreds of younger people, too.
■ On Chicago’s West Side, testing sites are nowhere to be found.
■ A new model offers hope COVID-19 may not hit Illinois as severely as previously projected.
■ A Harvard expert tells ProPublica “we’re in a fog” because we still don’t know how many people are in hospitals nationwide because of the virus.
■ Vice President Pence’s office is keeping the country’s top health officials from guesting on CNN—to pressure the network into carrying the president’s daily bloviations in full.

Enter at rear. To encourage passenger distancing, the CTA is moving buses’ fare card readers to the back doors and clearing drivers to skip stops if seats are too crowded.
■ The Trib’s John Kass: “The last thing Chicago needs right now is a bunch of drunken small-government libertarians shrieking about Mayor Lori Lightfoot’s curfew on liquor sales.”
■ Streetsblog Chicago’s John Greenfield warns of “a double standard for black and Latino communities” in the stay-at-home crackdown.
■ Think you had COVID-19 but got better? You may be able to help others—eventually. Chicago’s top doc, Allison Arwady, took Chicago Public Square’s question at 43:44 in this video.

‘The coronavirus shows tying health insurance to jobs is a disaster.’ Vox’s Ezra Klein says the present system “gives bosses too much power over workers, reduces entrepreneurship, saddles businesses with health costs they can’t control and insurance problems they don’t understand” …
■ … problems all the more manifest in light of today’s Labor Department report that, in the past three weeks alone, more than one in 10 U.S. workers have lost their jobs.
■ The Centers for Disease Control is relaxing its guidelines on who can return to work.
■ Treasury Secretary Mnuchin: Direct-deposit stimulus payments could show up in some Americans’ accounts next week.
■ Illinois’ gig workers face a long wait for federal relief.

Sanders’ tease. Now out of the presidential race, Bernie Sanders is nevertheless holding back on a full embrace of Joe Biden’s campaign.
■ Politico founding editor John F. Harris: Sanders’ legacy depends “on how he and his supporters handle the next few months.”
■ Vox: Nine ideas Biden should steal from Sanders and other campaigns.
■ Former Hillary Clinton staffers’ gleeful Zoom celebration of Sanders’ decision to fold was canceled.
■ The Trib’s Dahleen Glanton: President Trump doesn’t want Sanders to back Biden.
■ A bipartisan group of senators is demanding Trump explain by Monday his decision to dump the intelligence community’s inspector general. 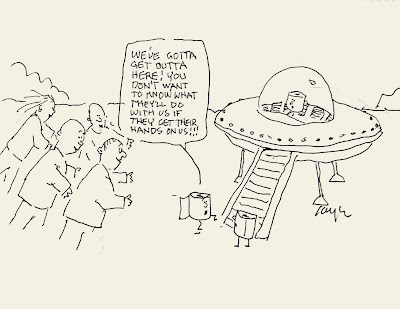 ■ Answers to your questions about why toilet paper is still hard to find. (Cartoon: Keith J. Taylor.)

Out-of-church experiences. Ministers from several Chicago congregations are teaming up for a unified Good Friday broadcast.
■ If you were looking forward to your township’s legally mandated annual meeting, don’t hold your breath.

Thanks to Chris Koenig and Ron Schwartz for link suggestions.