Relief? Updating coverage: Congressional leadership has come to terms on a $2 trillion coronavirus rescue plan that would send cash directly to most Americans, expand unemployment benefits and send hundreds of millions of dollars to small businesses struggling to make payroll even as workers are forced to stay home.
■ As it stands, the bill would forbid any of that cash from going to businesses controlled by President Trump, the vice president and other government leaders.
■ It would send cash to “gig workers.”
■ And it targets billions for Chicago-based Boeing.
■ Fear is stalking the halls of Congress.
■ A day after its biggest percentage gain since 1933, the Dow Jones Industrial Average opened the morning upbeat.

‘Trump … can go first.’ Columnist Jack Shafer says if Trump is serious about “essentially reopening the country” by Easter, he should also “order his entire family to break out of their life-support cocoons to take jobs as cashiers, deliverymen, nursing home janitors, bus drivers, EMT assistants and other positions that require regular contact with potentially infected people.” 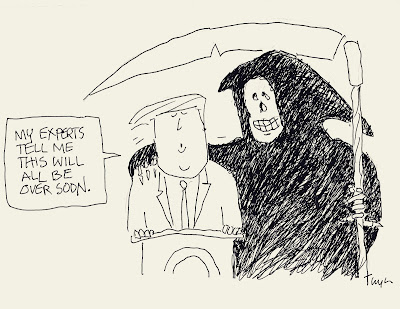 ■ Mayor Lightfoot: Trump’s vision “does not make sense at all.” (Cartoon: Keith J. Taylor.)
■ Gov. Pritzker on Trump’s inclination to put the economy above safety: “You can’t have a livelihood without a life.”
■ The Daily Beast’s take: “Trump to New York: You’ve Been Mean to Me, Drop Dead.”
■ Washington Post satirist Alexandra Petri: “We’ll have the country open by Easter! Think what more glorious fate there could possibly be than to die for nothing at all!”
■ This much is certain: The Walking Dead season finale won’t air Easter evening.

It had one job … Illinois’ unemployment website—which sucks under normal circumstances*—has been overwhelmed.
■ Michigan Avenue is dotted with boarded-up store windows.
■ A University of Illinois study concludes a state law requiring paid sick leave would limit disease outbreaks and create more jobs.
■ In a historic remote meeting you can watch online at 4 this afternoon, the Chicago School Board is poised to consider a $75 million coronavirus response plan.

Where to get tested. The Sun-Times has mapped locations offering COVID-19 checks—maybe.
■ Prince Charles has it.
■ Sen. Mitt Romney doesn’t have it (so far).
■ Why the virus may be claiming more men than women.
■ It’s sending young people to the hospital, too.
■ Chicago-born theater pioneer and acclaimed moviemaker Stuart Gordon is dead.

Warm weather may help. Early research suggests the pandemic could ease in parts of North America and Europe over the summer—but then, beware the fall.
■ The precipitous drop in airline travel may change the weather forecasting business.
■ A former Homeland Security official tells Politico the Trump administration in 2017 abandoned a program designed to model what would happen to everything from transportation systems to hospitals if, you know, a pandemic hit the U.S.
■ What is Germany doing right that other nations aren’t?

Liberty … to get sick. Befitting an institution whose curriculum gives a middle finger to science, Trump acolyte Jerry Falwell Jr. says he’s reopening his Liberty University’s Virginia campus to as many as 5,000 students …
■ … a decision the mayor in the university’s hometown calls “reckless.”
■ A Chicago urgent care doctor who’s tested hundreds of COVID-19-positive patients with no symptoms says social isolation makes sense: “It’s science. It is working.”
■ Two states are using the pandemic to limit abortions.

Good job, Illinois. Cellphone location data shows Illinoisans are among those leading the nation in staying home.
■ Staying at home has so far kept Illinois from running out of hospital beds.
■ A New York nurse warns, “Shit’s really going to hit the fan.”

Ticket thicket. Mayor Lightfoot ordered Chicago cops to go easy on routine traffic tickets, but the city’s 2008 contemptible deal to sell its parking meters to a private company means parking tickets abide.
■ Illinoisans have filed more than 700 complaints of price gouging since the month’s start.
■ Planning to move April 1? You still can.

Dave Matthews live. He’ll stream a concert Thursday night to benefit small businesses shuttered by the pandemic.
■ The revelation of the lineup and the sale of tickets to this summer’s Lollapalooza festival in Chicago are on hold.
■ Milwaukee’s Summerfest has been postponed until (almost) fall.


Thanks for help this issue from Mike Gold and Janean Bowersmith.