Don’t do as he says. The drug chloroquine phosphate, which President Trump has unscientifically touted as a possible treatment for COVID-19, may have contributed to the death of a Phoenix-area man and the critical illness of his wife.
■ Trump kept plugging the stuff even after the nation’s most prominent immunologist, Anthony Fauci, warned: “We don’t know … when you put it in the context of another disease … whether it’s safe.” 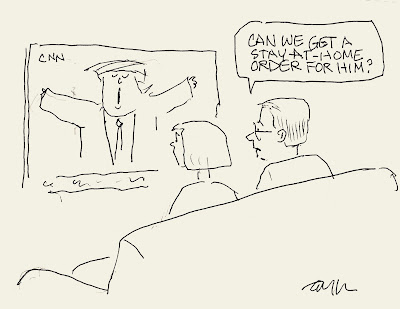 ■ ProPublica: Doctors are hoarding the unproven medicines Trump has been endorsing. (Cartoon: Keith J. Taylor.)
■ Aides say Trump’s losing patience with Fauci’s, you know, “science” …
■ … and, epidemiology be damned, Trump’s getting itchy to restart the economy …
■ … after shutdowns that have closed six of his company’s top seven revenue-producing clubs and hotels.
■ The Washington Post’s Jennifer Rubin: “Trump is more concerned about economic numbers than human lives.”
■ Esquire’s Charlie Pierce: Republicans have begun to “coalesce around the idea that grandparents must be sacrificed to COVID-19.”
■ Of the six commercial TV networks that began broadcasting the president’s dinnertime briefing yesterday, guess which was the only one to stick it out to the end? 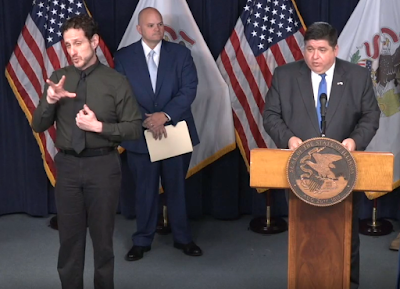 ■ Albert to the Tribune’s Heidi Stevens: “Any attention being paid to me is misplaced.”’
■ Pritzker and Trump seem to have begun to patch things up—a little.

Transit refunds. If you have a prepaid CTA, Metra or Pace pass that’s gone unused during the coronavirus shutdown, you’re in for some money back.
■ Parents who leave work to care for kids qualify for Illinois unemployment insurance.
■ ProPublica Illinois: Calls to the state’s child abuse hotline have fallen by nearly half amid the virus’ spread—and that’s not good news.

‘Too bad for you if I’m infected and I come into contact with you.’ That’s the way The Atlantic’s Edward-Isaac Dovere boils down COVID-19-positive Sen. Rand Paul’s “recklessness.”
■ Some senators and staffers are angry at Paul.
■ Minnesota Sen. Amy Klobuchar’s husband has it, Minnesota’s governor is in self-quarantine after exposure to it, and the state’s lieutenant governor’s older brother has died of it.
■ Klobuchar interviewed on MSNBC: “It’s going to happen to every family.”
■ Consumer Reports hosts a Facebook Live event this afternoon at 2 Chicago time, when experts will discuss how to stay safe in the pandemic.

Room service. Chicago’s going to rent more than 1,000 of the city’s otherwise-vacant hotel rooms to house people who’ve been exposed to COVID-19 but don’t need hospital care.
■ At least one alderman wants Chicago police stations closed to the public.
■ Looking to reduce the Cook County Jail population—and cut the risk of a COVID-19 cluster—teams of Cook County judges will review thousands of criminal cases to see who doesn’t really need to be locked up.

The (quadrennial) year without an Olympics. Japan and the International Olympic Committee have agreed to delay this year’s games by about a year …
■ … but they’ll still be called “the 2020 Olympics.”

Guns, groceries … and news. The Wall Street Journal’s analysis of real-time U.S. consumer data finds a few winners in the nation’s struggling economy.
■ The gun business is lobbying states to be categorized as “essential” during pandemic shutdowns.
■ The Sun-Times’ Mark Brown surveys how readers feel about working in “non-essential” businesses.