Now it’s a crisis. The spread of the coronavirus has prompted Green Day to cancel its Asia tour dates. 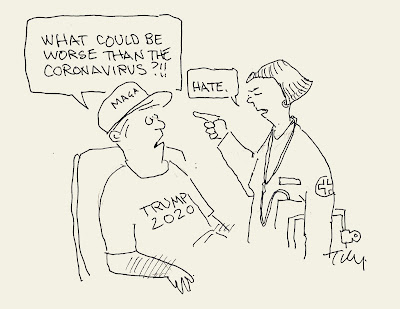 ■ CNN: This couldn’t have come at a worse time for Corona beer.
■ The stock market began the day on track for its worst week since the global financial meltdown of 2008.
■ Schools across the U.S. are planning for the worst.
■ FiveThirtyEight: Quarantines won’t be the answer. (Cartoon: Keith J. Taylor.)
■ ProPublica: How President Trump’s administration bungled its ability to detect the virus’ spread …
■ … to, as of this morning, nearly 60 nations …
■ … triggering a global run on face masks …
■ … a problem for which The Daily Show’s Trevor Noah has a, let’s say, novel solution.
■ A lawyer for a government whistleblower complains of “retaliatory efforts to intimidate and silence our client,” who contends federal workers lacked appropriate protective gear and training when they were dispatched to help quarantined Americans evacuated from China.
■ After the respected director of the National Institute of Allergy and Infectious Diseases warned the virus may be impossible to contain, he says he’s been “instructed … not to say anything else without clearance.”
■ Dan Froomkin in Press Watch: “Big media is covering up Trump’s terrifying incoherence in a time of emergency.”

Be careful out there. A high school student cooked up a fake 2020 candidate—and Twitter checkmark-verified the account.
■ Homeland Security’s chief says Russians are meddling in the Democratic presidential primaries.
■ The Onion: “‘I Like This Candidate Now And Will Vote For Him,’ Says Area Man After Having To Watch 12th Bloomberg Ad In Single Day.”
■ The importance of South Carolina’s vote tomorrow is partly the result of one man’s fight to end whites-only primaries.
■ Picking your candidates? The Chicago Public Square voter guide is here for you.
■ The Daily Beast: Mitt Romney’s vote to convict Trump has made him “a bigger conservative villain than socialism” at the annual Conservative Political Action Conference.

CTA crimefighters. In the face of a rise in violence on buses, trains and platforms, the Chicago Police Department is adding 50 officers to the city’s Mass Transit Unit.
■ You know those 32,000 security cameras the CTA’s always bragging about? The department will finally be monitoring them in real-time. (Photo: Brian Crawford in the Chicago Public Square Flickr group.)
■ NBC 5 has won a round* in its two-year fight for records of a crash involving two Chicago cops.

Square will do it for $114.99. Cameo, the company that sells customized video greetings from celebrities, has booked disgraced-but-freed ex-Ill. Gov. Rod Blagojevich—whose salutations were, as of Square’s email deadline, going for $115.
■ Cameo also represents an array of other B-list Trump-era celebs, including Stormy Daniels (middle of today’s Politico Illinois Playbook).
■ And while we’re on the subject of politicians with too much time on their hands, here you go.

‘This is very natural.’ The head of Chicago Public Schools’ Office of Student Protections reports a dramatic increase in sexual misconduct allegations—but credits better training about how to file those complaints.
■ An investigation of an alleged sexual assault at Lincoln Park High School has been closed—without an arrest.

Amazon + Naperville. A former Dominick’s store apparently will house a new Amazon grocery on that town’s south side.
■ Crain’s examines the decades-long flight of black residents from Chicago.
■ ProPublica introduces you to an Illinois senator who struggled to dig out from $3,000 in ticket debt.
■ Shopping for auto insurance? Beware a company that Consumer Reports warns tried to engage in discriminatory pricing.

‘It has been a hell of a last month or so for Tribune and its employees.’ Neiman Lab’s Joshua Benton reflects on bloodletting at Chicago’s biggest newspaper and warns that “June 30 … may well define the future of the Tribune … or … American newspapering as we know it.”
■ The Trib’s new boss: “I’m a lucky bastard.”
■ Layoffs have been also been ravaging the nation’s biggest newspaper chain, Gannett.
■ The Sun-Times’ Neil Steinberg is disappointed he hasn’t been sued by Trump.

Square mailbag. Reader John Owens writes of yesterday’s edition: “I love and always look forward to the Public Square, but the Keith Taylor lynching cartoon to go with the anti-lynching bill story is pretty insensitive. Visual jokes about the Klan surrounding an African American with a noose around his neck are kind of hard to take.”
■ Taylor responds: “I take great pains creating my images to avoid insensitivity. Four congressmen of the United States opposing a bill labeling lynching a hate crime disturbed me. The drawing is meant to be disturbing.”
■ Your Square founder, who made the call to run the cartoon, is ultimately responsible for what appears in these pages. Thanks, John, for the reminder to think carefully before pressing that publish button.
■ Comment on Square anytime at the website or by writing to Comments@ChicagoPublicSquare.com. 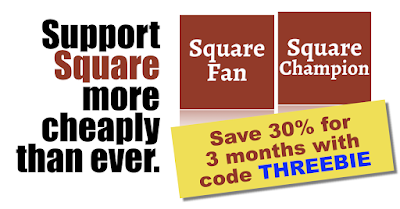 
Thanks to reader Mike Braden for bringing some added clarity to the Amazon item above.

* Before a judge married to your Chicago Public Square publisher.
** Yes, that Bruce Dold.