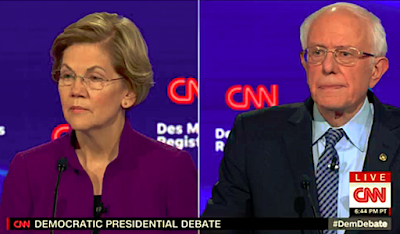 ■ … and that set a #CNNisTrash hashtag trending on Facebook.
■ Warren and Sanders had words after the debate.
■ CNN analyst Chris Cillizza: “Someone is lying. Or, at the very least, badly misremembering.”
■ The Daily Show’s Trevor Noah credits Warren for a devastating putdown: “Not since Kill Bill have I seen one woman obliterate that many men in one fell swoop.”
■ Here’s a full transcript of the debate.
■ The Washington Post tracked which candidates talked how much last night and found one gender dominated, although The New York Times’ rankings were a little different.
■ Near the bottom of both lists: Joe Biden, who Vox’s Matthew Yglesias says skated by again.
■ Not on stage last night: Ex-New York Mayor Mike Bloomberg, who’s spent millions on Chicago TV ads since November.
■ An interactive updated Washington Post poll aims to reveal which of the Democrats you agree with most.
■ The Tribune’s Mary Schmich: “Stop telling me who’s electable and who’s not.”

College tries. The candidates split on how to address college students’ soaring debt.
■ Speaking of which, the University of Illinois is poised to raise its president’s base pay by 40%—$235,000 a year.

Meanwhile in Trumpworld … President Trump was ranting in Milwaukee about toilets.
■ Impeachment heads to the Senate today—literally walked across the Capitol …
■ … for a trial to be prosecuted by this newly named team of seven House Democrats.
■ Russia has a political crisis of its own: Its entire government is quitting to protest President Putin’s latest power grab.

City Council’s Chuck and Larry moment. Citing a 2007 comedy, a Chicago alderman warned about the possibility of fraud if the city moves ahead with special consideration for gay business owners.
■ On today’s City Council agenda: A strengthening of the city’s immigrant “sanctuary” law.
■ Mayor Lightfoot’s come around to supporting a plan to slow gentrification along The 606 bike and pedestrian trail.
■ A new report finds real estate prices along part of The 606 have more than tripled in seven years.
■ See today’s City Council meeting on the web.

Passings.
■ For the second time in two weeks, a lion is dead at Brookfield Zoo.
■ Chicago’s venerable Blommer Chocolate Co. is closing its storefront shop to expand manufacturing operations responsible for the chocolatey smell that often charms the city’s air.

Need a new portrait for a website, LinkedIn or publicity? Photojournalist Karen Kring can help. Sign up now for Sunday’s shoot.