‘Intolerable.’ Mayor Lightfoot has fired Chicago Police Supt. Eddie Johnson, who she says “intentionally lied to me—several times” about a drinking-and-driving incident in which he was involved. 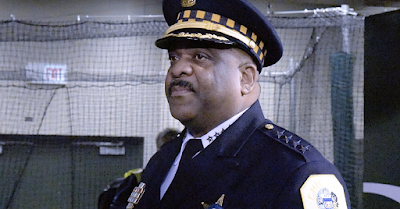 ■ Her formal statement: “Had I known all the facts at the time, I would have relieved him of his duties as superintendent then and there.” (2016 photo: Daveakmc.)
■ Sources tell CBS 2: Johnson was found slumped over a steering wheel in October after drinking with a woman who was not his wife.
■ The Better Government Association is going to court to find out what happened.
■ The Beachwood Reporter’s Steve Rhodes reviews the departures of Chicago’s 10 most recent police chiefs: “Has a single one of them been any good?”
■ Meet the new boss.
■ A Tribune editorial sees a twofer: “The mayor punished Johnson for unethical behavior, and she set an expectation that all officers of the Chicago Police Department will be held to high standards of integrity—or else.”

Nazi alert. Holocaust denier and avowed Nazi Arthur Jones of Lyons is again running for Congress from Illinois as a Republican.
■ Also in the Republican congressional hunt: Conspiracy-theory champion Bill Fawell of Galena.
■ Politico rounds up other surprises in last-minute filing for the March 17 primary.

Elizabeth Warren’s ‘moment.’ Video of the candidate choking up while counseling a young woman who’d recently come out exemplifies something Vogue’s Michelle Ruiz says “male politicians do not do often.”
■ Wonkette’s Doktor Zoom (whose real name is Marty Kelley): “Shut Up, F*ck You, Gay Teen And Elizabeth Warren Not Making Us Cry, YOU’RE Crying.”
■ Billionaire candidate Tom Steyer has bought a website that echoes Donald Trump’s reelection slogan—KeepAmericaGreat.com—and is using it to sell anti-Trump bumper stickers.
■ Joe Biden escaped Iowa Monday for a fundraising raid on Chicago.
■ The Onion: “Nation Calls For Letting Biden Rub Women’s Shoulders Again After Seeing What He’ll Do Instead.”

‘A broken system.’ As you shop for the best deals on the best gadgets this season, OneZero’s Alex Rowe advises you beware online reviewers “acting as frontline salespeople for the very product they’re covering.”
■ Consumer Reports runs down “Top Tech Gifts for Under $100.” (Cartoon: Keith J. Taylor.) 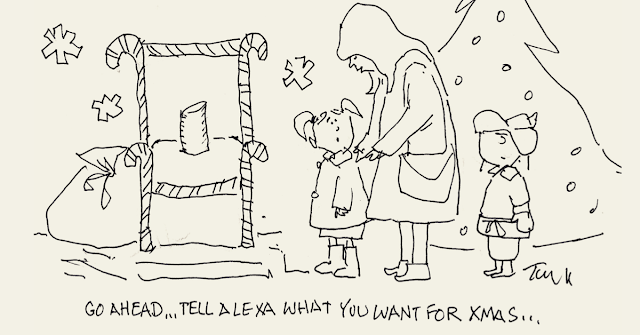 Incoming: New journalists. The nonprofit Report for America is recruiting 250 local reporters to work in 164 newsrooms across 46 states.
■ Applications are open until Jan. 31.
■ Predatory Alden Global Capital is getting two seats on Tribune Publishing’s board and giving one of them to a guy on the board of Fred’s Inc.—a chain of stores Alden took into bankruptcy and mostly closed.

If you’re not getting Steven Richard Sheffey’s weekly Chicagoland Pro-Israel Political Update in your inbox on Sunday mornings, you’re missing out on great analysis of the Middle East and related issues from a Democratic perspective. Sign up free here.

An apology for that apology. Yesterday’s expression of regret about last week’s redundant email transmission of Chicago Public Square noted that the responsible party had been disciplined accordingly. Unfortunately, the phrase “the responsible party” was hyperlinked to the wrong page. It should have pointed here. Appropriate discipline has been administered to the party responsible for that mixup.

■ Square always welcomes your feedback …
■ … and your support.