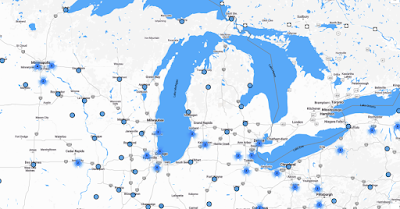 Impeachment rallies. More than 600 demonstrations to demand the House impeach President Trump have been scheduled tonight across the country …
■ … including one in Chicago.
■ A conflicted conservative Democratic Chicago congressman, Dan Lipinski, says he’ll vote to impeach.
■ More than 700 historians—including several from Chicago and Illinois—“strongly urge the House of Representatives to impeach the President.”
■ Illinois Comptroller Susana Mendoza sends the state’s Republicans an open letter: “Don’t listen to your donors, your party enforcers or your extorter-in-chief. Listen to your conscience.”
■ Presidential counselor Kellyanne Conway’s husband, George, and three other veteran Republican political strategists are launching a political action committee to defeat Trump.
■ The Tribune editorial board is again beating the drum for censure.
■ Watch live as—for the first time in history—the House Rules Committee debates articles of impeachment.

‘Anybody on any part of the left who still thinks Tulsi Gabbard is on their side for some reason, bless your dang heart.’ Wonkette’s Evan Hurst struggles to grok Gabbard’s visit with Mike Huckabee on his Trinity Broadcasting Network show.
■ The New York Times’ politics editor explains “How the Internet Came to Loathe Pete Buttigieg.”
■ The Wall Street Journal: Buttigieg’s campaign took off when he distanced himself from liberals.
■ Also from the Times: “Elizabeth Warren and Bernie Sanders have … a de facto nonaggression pact. But to win the Democratic nomination, one must prevail over the other.”
■ Warren is demanding candidate Mike Bloomberg address complaints about his sexist remarks.

The Navy regrets. Sun-Times reporting has prompted the U.S. Navy to reverse an error that forced a student to leave DePaul University, sticking her with $20,000 in debt.
■ The Navy’s naming a new ship after pioneering LGBT politician Harvey Milk, who was pushed out of the military for his sexual orientation.

Whoops. Mayor Lightfoot at least made a mistake—or maybe lied—in her defense of the City of Chicago’s top lawyer, who improperly got tax breaks on a Naperville house and a Chicago condo …
■ … raising fresh questions about why the mayor fired veteran city spokesman Bill McCaffrey …
■ … upon whom The Beachwood Reporter’s Steve Rhodes has repeatedly bestowed the title “Worst Person In Chicago.”
■ Some Chicago library branches begin Sunday hours this weekend.

R.I.P., CLTV. The new owner of WGN-TV and Radio is killing their sibling Chicago cable news channel.
■ From 1996, a legendary moment in CLTV’s broadcasts from Tribune Tower: Keep your eye on the zucchini.
■ Vox Media is cutting hundreds of freelance jobs.

‘Retail apocalypse’ victims. Elimination of 500,000 retail jobs this decade has disproportionately hit women.
■ Amazon is putting the screws to its merchants … and FedEx.
■ A new report ranks the best grocery chains in each state.
■ A list of Illinois hospitals named the nation’s best leaves out some of Chicago’s most prestigious.

Mariah Carey finally makes it. It took a quarter-century, but All I Want for Christmas Is You at last ranks No. 1 on Billboard’s Hot 100 chart …
■ … days after a surprise popup band performed it on a CTA train.
■ From 2014: What makes that song so darned appealing.
■ Having trouble finding a Christmas tree—or at least a cheap one? Blame the last decade’s recession.

Need a new portrait for a website, LinkedIn or publicity? Photojournalist Karen Kring can help. Sign up now.