Impeachment parade. Add the editorial boards of USA Today and The Philadelphia Inquirer to the roster of those supporting the filing of charges against Donald Trump—in the Inquirer’s words, “if not to punish abuse of power, then to affirm Congress’ standing as a coequal branch of government.”
■ Earlier on the list: The Sun-Times, The Los Angeles Times, The Boston Globe, (ahem) Chicago Public Square (way ahead of the curve) … but not the Tribune.
■ Wonkette is live-blogging today’s House Judiciary Committee hearing to mark up the articles of impeachment: “Democrats will be normal, and Republicans will offer as many amendments as they can to slow down the process and gum it up and just generally be obnoxious.”
■ But watch for yourself.

Because of course he would. A day after Time named 16-year-old Greta Thunberg its Person of the Year, the president attacked her on Twitter. (Cartoon: Keith J. Taylor.) 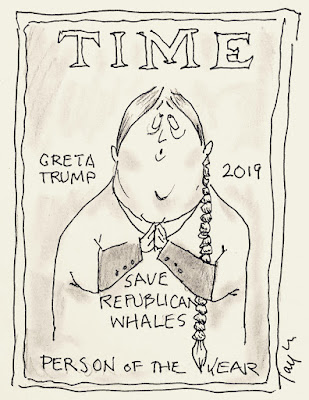 ■ Wired: “Fox News Is Now a Threat to National Security.”
■ Trib columnist Rex Huppke: “Russian propaganda has become the company line in Trump’s America.”
■ The president’s sway over the federal judiciary has reached a milestone with confirmation of his 50th circuit court nominee.
■ The president’s Hanukkah party featured a speech from a pastor who’s said Jews are headed to hell.
■ With a nod to the Nazi seeking the Republican nomination in her district, southwest suburban Democratic congressional candidate Marie Newman promises to hold quarterly anti-hate forums.

Obamacare breakthrough. Illinois consumers who buy health insurance on the Affordable Care Act exchange are finally getting access to a plan that includes in-network services from one of the Chicago area’s major hospitals …
■ … but act fast.
■ One of Chicago’s biggest “food deserts” at last has a full-service grocery store.
■ An old Chicago factory reopens in February as a massive new concert venue.
■ Crain’s Dennis Rodkin: “One of these groups will get $10 million to help boost a disadvantaged neighborhood.”

‘We honored the victims of the war on drugs.’ Gov. Pritzker was among those in court as Cook County State’s Attorney Kim Foxx began the process of clearing the records of tens of thousands of people convicted of low-level marijuana crimes.
■ Over the objections of aldermen who say the deal constitutes a reward for criminality, the Chicago City Council Finance Committee has OK’d a $1.2 million payout to the family of a man who died in police custody.
■ Some aldermen are defending the Chicago Police Department “merit promotions” system abolished by acting Police Supt. Charlie Beck—complaining the change will cripple minority officers’ advancement.

It’s not just you and Alexa. Businessweek documents what a lot of users of smart speakers may not realize: “Silicon Valley Is Listening to Your Most Intimate Moments”—letting temp workers analyze sensitive recordings unwittingly shared by millions.
■ An update to Google’s Chrome browser now can alert you when your password is compromised.
■ The only gadget to make Google’s top searches for 2019 was …

‘The Thanos of the newspaper business.’ The Nieman Journalism Lab’s Joshua Benton surveys Alden Global Capital’s looming threat to Tribune Publishing, parent to the Chicago Tribune …
■ … whose employees are sounding the alarm about the company’s new largest shareholder.
■ At least one U.S. president running for reelection doesn’t consider the Thanos comparison unflattering …
■ … which prompted Stephen Colbert’s show to suggest other movie villain comparisons the Trump campaign might want to consider. 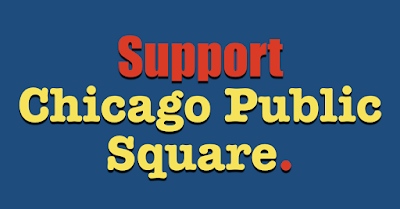 Thanks. Square readers’ support keeps this thing coming your way. You can join them here or—why not?—bump up your existing pledge here.
■ And thanks to reader Chris Koenig, whose tireless stream of suggestions frequently inspires Square.