‘The best contract they’ve ever seen.’ Politico’s Shia Kapos says that’s what some Chicago teachers privately acknowledge their strike achieved.
■ What’s in the contract.
■ What it means for kids returning to class today.
■ To be determined: Will strike makeup days cut into schools’ winter or spring breaks?

‘Fighting for her life.’ Police reported a 7-year-old girl shot last night while trick-or-treating with her family was in critical condition.
■ Update, 10:21 a.m.: They’ve ID’d a “person of interest” in the case.
■ The bad weather on Halloween prompted a number of suburbs to reschedule the begging for this afternoon or Saturday.

Housing help. Mayor Lori Lightfoot is rolling out details of a new program to help Chicago’s poorest avoid water shutoffs.
■ The government is suing Facebook, alleging its ad policies empower housing discrimination.
■ Residents of a North Side building have until today to move out—the latest displacements in the city’s decades-long loss of affordable places to live.

Elizabeth Warren’s health plan. She’s spelling out in detail her proposal to expand Medicare …
■ … and she says it won’t raise middle-class taxes “by one penny.”
■ Vox’s Ezra Klein: “She intends to pass health reform by running over the healthcare industrial complex, and every corporation and billionaire in America.”

No. 4. As Donald Trump became only the fourth U.S. president subject to a formal impeachment-related vote, the Sun-Times’ Lynn Sweet details how the Illinois delegation split.
■ Nationwide, only two Democrats voted against the resolution.
■ House Speaker Nancy Pelosi told Stephen Colbert the impeachment process is “a sad thing for our country” … 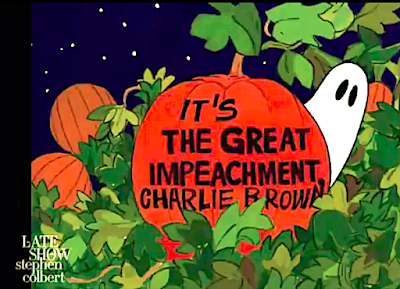 ■ … in a show that opened with a satiric cartoon: “It’s the Great Impeachment, Charlie Brown.”
■ What’s in the impeachment resolution.
■ Bloomberg’s Timothy O’Brien: Trump’s not ready for impeachment hearings.
■ CNN fact-checks the administration’s claims yesterday’s resolution is unconstitutional, and guess what?

‘Real ID is a real bad idea.’
The Tribune’s Eric Zorn predicts a federal rule requiring a lot of people to get a newfangled driver’s license by Oct. 1 if they want to take a domestic flight is gonna be a “real nightmare.”

Beef to beware. A coalition of consumer groups gives 15 fast-food chains failing grades for serving beef raised with antibiotics they don’t need.
■ But Consumer Reports is pressing Wendy’s in particular to “do the right thing.”
■ McDonald’s is up to a C from an F last year …
■ … and it’s apologizing for an ad that referenced a British massacre.
■ Days after being named the world’s No. 1 brand for plastic waste, Coca-Cola is teaming up with Pepsi and Dr. Pepper to cut waste and increase recycling.
■ Google’s parent, Alphabet, is buying FitBit—going head-to-head (or is it wrist-to-wrist?) against Apple in the smartwatch biz. Thanks to reader Mike Braden for a style reminder in the item about Mayor Lightfoot above.