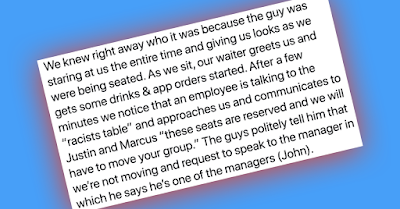 ■ Several employees of a Buffalo Wild Wings restaurant in Naperville have been fired after a manager asked a party to move because a regular customer “doesn’t want black people sitting near him.”
■ The Facebook post that flagged the story: “We knew right away who it was.”
■ McDonald’s has ousted its CEO for engaging in a relationship with an employee …
■ … a misdeed that it buried in a news release …
■ … and that triggered a downgrade in McDonald’s stock.
■ Krispy Kreme has brought the hammer down on an enterprising St. Paul college student who’d been driving to Iowa to buy doughnuts for resale in Minnesota—which hasn’t had a Krispy Kreme store in 11 years.

Trump’s fake followers. A New York Times analysis of Donald Trump’s more than 11,000 tweets since becoming president concludes fewer than a fifth of his followers are registered voters—and the rest include spies. 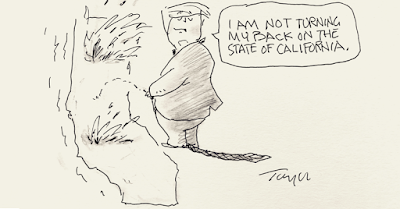 ■ As California has struggled to contain raging wildfires, the president’s critical—and uninformed—tweets have inflamed relations with the state’s leadership. (Cartoon: Keith J. Taylor.)
■ Developing: A federal appeals court has rejected Trump’s bid to keep his tax returns out of the hands of criminal investigators.
■ Trump’s bringing covfefe back.

‘Cancel the primaries.’ Columnist Jonah Goldberg says the presidential primary system just fuels “pandering to the most passionately ideological voters”—and gives disproportionate influence to Iowa and New Hampshire, which he notes are “very white places, and I don’t mean in the ‘white Christmas’ sense.”
■ Democratic strategists plan to channel $75 million to challenge Trump’s early reelection spending on Facebook and Google.

Corruption cavalcade.
■ The saga of indicted and now-resigned Illinois State Rep. Luis Arroyo is putting fresh heat on the state’s massive plans for gambling expansion …
■ … and triggering a scramble among those looking to replace him.
■ Under-investigation Chicago Ald. Carrie Austin’s chief of staff got a suspiciously sweet deal from Cook County.

‘I feel like I’m going to get killed.’ An 18-year-old talks to the Tribune about the loneliness, isolation and health problems two new studies document in people exposed to violence.
■ The president of the Chicago Community Trust is sounding a call for “Chicago’s moonshot”: Closing the racial wealth gap—and you can watch her elaborate live on the web when she speaks to the City Club of Chicago at 12:20 p.m.

What they have on you. A Times reporter shares and explains: “I Got Access to My Secret Consumer Score. Now You Can Get Yours, Too” …
■ … and when you do, thank California (2018 link).

Hello, Yellow Brick Road. A golden-hued sidewalk is taking its place at the site of the since-demolished Chicago home where L. Frank Baum wrote The Wonderful Wizard of Oz—with a mural to follow.
■ An iconic Chicago-area record store is dropping the needle on its final track at the end of the month.
■ Toys ‘R’ Us’ sort-of return to Chicago “is a mess, but worse, it looks cheap and feels cynical.”
■ Chicago’s WLIT-FM returns to an all-Christmas music lineup Tuesday.

‘To see what these ghouls have done to Deadspin has been distressing and exhausting and infuriating and, yeah, ultimately downright inspiring.’ The site’s founder, Will Leitch, reflects on its origins and its legacy: “I knew I wouldn’t be able to stave off the barbarians forever.”
■ BuzzFeed News and CNN are winning journalists’ praise for a freedom-of-information win that Philadephia Inquirer columnist Will Bunch says reveals how the Mueller probe failed America.
■ A Pulitzer-winning newspaper has won historic IRS approval to become a nonprofit—and, as of today, is accepting donations.