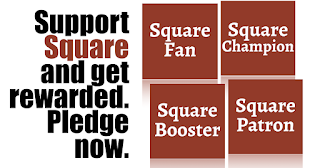 If you find Chicago Public Square invaluable, please thank those who value it enough to support it for a few cents a day—including Martin Berg, Martha Intrieri, Mark Wukas, Mark Mueller, Marj Halperin, Marianne Matthews, Maria Mooshil, Maria Garvy and Marc Magliari. You can join them here. And now the news:

‘A black mark on Naperville.’ A city councilwoman is—along with Naperville’s mayor and Gov. Pritzker—among those condemning since-fired Buffalo Wild Wings restaurant workers’ decision to ask families celebrating the end of a basketball tournament and a player’s birthday to change tables because a guy said he didn’t want to sit near black people …
■ … an incident detailed in a Facebook post that was by far the most-clicked item in yesterday’s Square.
■ The victims planned a news conference for this morning (after Square’s email publication deadline).
■ A Tribune editorial: The right way to handle racist customers.
■ Block Club Chicago: At least 18 Chicago bars and restaurants are cutting ties with a brewery accused of racism.
■ Krispy Kreme is relenting: It’ll let an enterprising college student resell its Iowa doughnuts in Minnesota—where it has no stores—and it’s kicking in an apologetic 500-dozen doughnation.

Nice disgraceful exit if you can get it. McDonald’s CEO Steve Easterbrook—fired for his relationship with an employee—gets to keep stock awards worth more than $37 million, plus $675,000 in severance and health insurance benefits.
■ So you won’t see him working at Starbucks anytime soon—which is just as well, because he can’t.
■ His “chief people officer” is out, too.
■ Another Trib editorial: Why Easterbrook had to go.

‘Under constant threat.’ A spokesperson for the Illinois Elections Board tells WTTW the state is experiencing continual foreign digital assault—and not just on election systems. He says it’s “everywhere in government.”
■ In what stands to be Illinois’ biggest Democratic primary showdown next year, one of the state’s U.S. representatives is endorsing the challenger to another.
■ Election Day in four states today—especially Virginia—offers clues to what’s ahead in 2020.
■ McClatchy: Trump’s well-oiled campaign has everything planned—except Trump.

‘I really needed to watch my back.’ A newly released transcript of closed-door testimony from former U.S. Ambassador to Ukraine Marie Yovanovitch reveals she told Congress of a chilling warning that people in the Trump administration were “looking to hurt” her.
■ Stephen Colbert on Yovanovitch’s dilemma: “Faced with losing her career or saying one nice thing about Donald Trump, she said, ‘Anybody got any boxes?’”
■ The Atlantic: The transcripts demonstrate government officials live in fear of the president’s tweets. 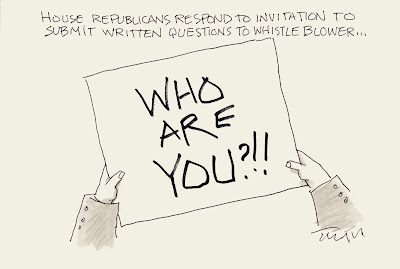 ■ The Justice Department is trying to force the publisher of a White House tell-all to out its author, “Anonymous.”
■ (Correction:) The whistleblower who shone a spotlight on Trump’s interactions with Ukraine is offering to answer House Republicans’ questions—in writing. (Cartoon: Keith J. Taylor.)
■ Vox serves up “the ultimate guide” to the Trump impeachment saga.

‘There is no reason to wait for more deaths or injuries.’ Consumer Reports says the Trump administration isn’t doing enough to get dangerous inclined infant sleepers off the shelves and out of homes and day care centers.
■ CR’s letter to Baby Delight, Chicco, Dorel Juvenile, Evenflo, Fisher-Price, Graco, Hiccapop, Nuna and Summer Infant: “Your company must acknowledge the dangers … no later than Nov. 11.”
■ Sun-Times columnist Phil Kadner: “You will lose your private health insurance plan. I am not referring to the result of any mandate imposed by some radical national health care plan. … Your employer is going to change your health insurance plan. Your old plan is going to disappear. It happens every year to millions of people.”

She lied. Newly released video shows a since-“retired” Chicago Public School principal offering a false account of how one of her students wound up spending more than 30 minutes outside her school in frigid weather.
■ Chicago teachers vote next Thursday and Friday on the contract offer that ended their strike.

Pot bust in your past? Under Illinois’ marijuana reforms, a pot-related conviction could give you an edge in the job hunt.
■ The Chicago Housing Authority says federal law requires it to forbid marijuana for its tenants, even after it becomes legal in Illinois.
■ Reuters: How Juul created a new generation of nicotine addicts.

‘Why the heck would we spend money on something like that?’ Calling The New York Times “fake news,” commissioners in a Florida county have refused to fund a library request for digital Times subscriptions.
■ “The Onion Announces New Nationwide Literacy Program Encouraging Kids To Read The Onion For An Hour A Day.”
Owning a business can be lonely. Who can you talk to and get ideas and advice from? Anchor Advisors can help—with a free email newsletter. Sign up here.

Thanks …
■ … to readers Mike Braden and Mike Weiland for spotting the error corrected above.
■ … and to Square fan Chris Koenig for more great link suggestions this time out.