Thumb pain. Melania Trump tweeted a photo of herself and the president with a baby orphaned in the horrific attacks in El Paso—showing the president grinning and giving the thumbs-up gesture … ■ … triggering widespread scorn.
■ An El Paso hospital official tells CNN Trump showed “an absence of empathy” in his visit with victims.
■ Presidential aides concede the president’s visits to El Paso and Dayton didn’t go well.
■ Speaking of clueless: Joe Biden’s campaign is apologizing for his remark yesterday in Des Moines that “poor kids are just as bright and just as talented as white kids.”
■ The Onion: “‘Sorry About The Tornado Or Whatever,’ Says Trump Wolfing Down Bowl Of Chili While Consoling El Paso Shooting Victim.” (Cartoon: Keith J. Taylor.) 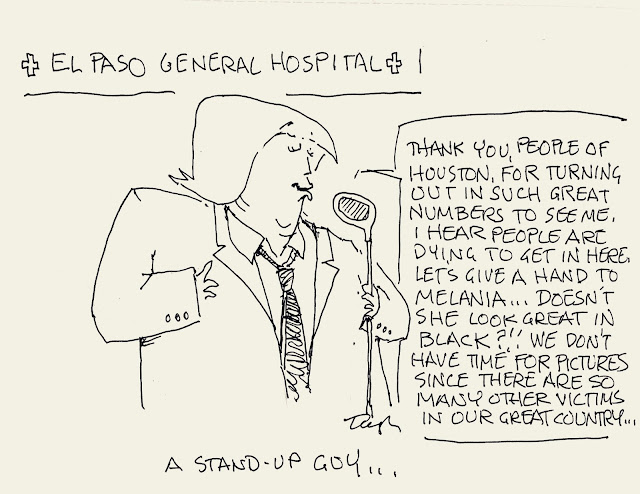 Not ready. As of July 17, Illinois State Police were supposed to begin certifying that the state’s gun dealers have a federal licenses. But, the Tribune reports, they have yet to act on the 1,158 applications they’ve received.
■ Walmart is removing violent video games from its shelves—but still selling guns.
■ The Trib’s Eric Zorn sounds the alarm about “how many soft targets—crowded but essentially unprotected public spaces—there still are in our society.”
■ How to improve your odds against an active shooter.
■ PolitiFact rates as False the claim from Sen. Dianne Feinstein that “there are more gun deaths by far” in the U.S. than in any other country.

Latinos ‘erased.’ An NPR host writes for The Atlantic that many news organizations failed to describe events in El Paso as what they were: An attack that “purposefully targeted Latinos.”
■ The Sun-Times’ Neil Steinberg: “Americans are not divided by race or religion but separated into two broad categories. Either you sympathize with people different than yourself. Or you don’t.”

‘The sleaziest president in recent American history threatens yet again to commute the prison sentence of one of the sleaziest governors in Illinois history.’ The Sun-Times’ Mark Brown sets the record straight on the president’s “attack on the people involved in investigating and prosecuting [ex-Illinois Gov.] Blagojevich.”
■ How Blagojevich’s wife, Patti, courted Trump’s attention.
■ Illinois Republicans aren’t happy about the prospect: “People are going to question Republicans up and down.”
■ A Trib editorial: “Blagojevich was not the victim. The people of Illinois were.”
■ Better Government Association chief David Greising on the bright side, kind of: Other Illinois politicians may need that cell space.
■ Archival audio: How it sounded on the radio December 7, 2011—the day Blago was sentenced.

Celebrated priest’s crisis. Retired Chicago Father George Clements faces a complaint he sexually abused a minor in the ’70s.
■ Chicago police have been on the case since June.

Aug. 29. Mayor Lightfoot’s planning a prime-time address to Chicago that evening, to spell out just how scrod Chicago’s budget is—a reported $1 billion shortfall—and how she’ll propose to fix it. 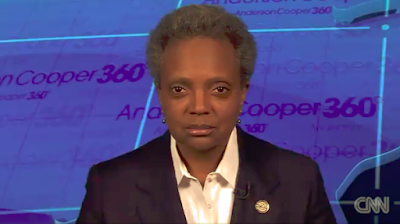 ‘The Bud.’ Saturday brings the 90th anniversary edition of Chicago’s Bud Billiken Parade, the nation’s the largest African American celebration of its kind.
■ How to join the fun.
■ Who is Bud Billiken?

Why the headline on yesterday’s Chicago Public Square changed.
Square reader (and publisher’s son) Joel Meyerson flagged a problem with the original heading for an item above yesterday about political and racial tension between baseball players’ wives. As he wrote: “‘Batfight’: Nice pun, though it’s still basically calling the dispute a ‘catfight,’ which trivializes (and sexualizes) legitimate disputes between women. It’s a concept that’s part of a worldview in which only men can have serious debate.” 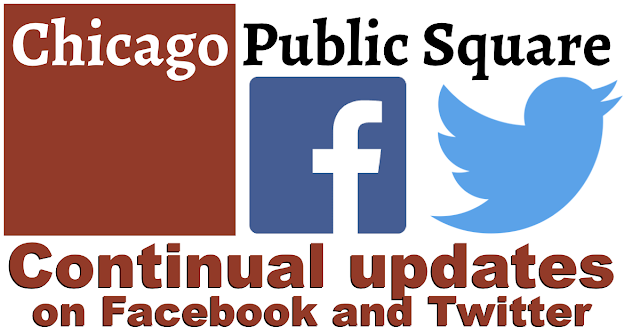 Thanks to readers Pam Spiegel and Aaron Barnhart for catching some errantly placed articles above.