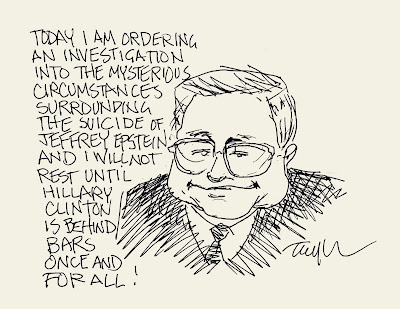 ■ The New York Times’ Charlie Warzel: The rapidity with which conspiracy theories about the death of a man who befriended celebrities and presidents went viral is “a grim testament to our deeply poisoned information ecosystem” …
■ … and Donald Trump helped.
■ Poynter: The Epstein case should prompt journalists to report more on jail suicides—the leading cause of inmate deaths.
■ The Wall Street Journal: Epstein’s brother’s wealth is also a mystery.

‘To Donald Trump, this baby is little more than a hunting trophy in his own brutal race war.’ New York magazine’s Rhonda Garelick reflects on that soulless photo of Trump and his wife holding the baby whose parents were killed protecting him from a gunman inspired by the president’s hateful immigration rhetoric.
■ Updating coverage: The Trump administration is making one of its harshest moves yet to limit legal immigration.
■ Updated count: Trump’s made at least 12,019 false or misleading claims since taking office.
■ The president’s former communications director, Anthony Scaramucci, says the Republican Party should consider replacing Trump on the 2020 ticket.
■ The Onion: “[Park Ridge-based] Koch Foods CEO Applauds Immigrant Arrests As Consequence Of Illegally Accepting Job At Koch Foods.”
■ True fact: Koch Foods paid $3.75 million to settle a lawsuit complaining that supervisors “touched and/or made sexually suggestive comments” to female Hispanic employees.

‘If you can make it to the emergency department, you’re more likely to live in 2019 than you were in 1982, so technology has increased on that side, but also gun lethality has increased as well.’ A Northwestern University researcher studying U.S. gun massacres predicts at least four more before the year’s up.
■ Among close to 50 people shot across Chicago over the weekend: An 8-year-old girl wounded at a barbecue.

A ‘life-saving law.’ Gov. Pritzker has signed a bill requiring public schools to teach LGBTQ history.
■ Illinois is one of just a few states that doesn’t don’t enforce limits on class sizes.
■ Presidential candidate Michael Bennet: “I would rather have free preschool … than free college in this country.”

Targeted. If you used an ATM at the State Street Target store, your debit or credit card may have been compromised.
■ ZDNet’s Jason Cipriani is documenting his experience with Apple’s evolutionary new credit card.
■ Apple is offering $1 million to anyone who can hack an iPhone.

Looking down. It’s Manhole Cover Monday on Twitter.
■ Someone dropped a mattress onto the sidewalk in the West Loop overnight—missing a pedestrian. 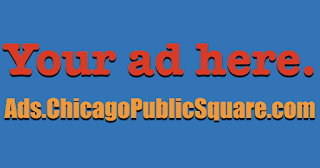 ■ A deal to merge the nation’s two biggest newspaper chains may not happen after all.
■ On this date in 2008, Reader media critic Michael Miner was taken aback—and then not so much so—by an email newsletter that didn’t point just to its parent organization’s web pages …
■ … a notion that lives on at Chicago Public Square—the Switzerland of Chicago-area news—which you can support here.