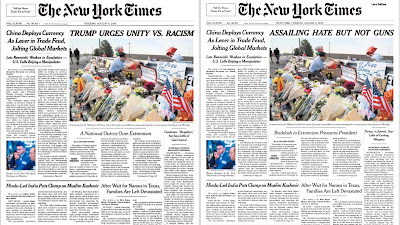 ■ … a position not reflected in a widely slammed—and then revised—New York Times headline.
■ Law & Crime editor Matt Clibanoff: “NY Times Apparently Thinks There Are Some Good White Supremacists.”
■ The Philadelphia Inquirer’s Will Bunch: “A president choosing to use the bully pulpit of his office to embrace racism—with the naked political goal of his own re-election—and now inspire mass murderers is the greatest abuse of American power in my lifetime.” 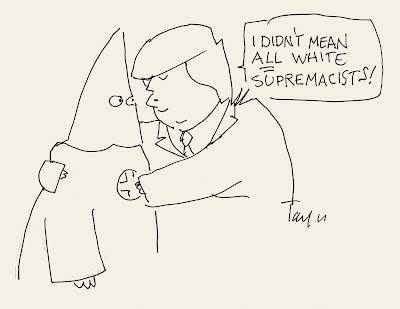 ■ Late-night TV hosts have been addressing Trump with a forthrightness much of mainstream journalism has avoided. (Cartoon: Keith J. Taylor.)
■ Late Night’s Seth Meyers on Republicans’ eagerness to blame digital entertainment: “If video games were so influential, they should make one about Congress called F___ing Do Something.”

‘I’m sure he has his reasons, like the $1.26 million in NRA contributions he has received.’ The Late Show’s Stephen Colbert lit into Senate Majority Leader Mitch McConnell for inaction on bipartisan gun regulation legislation.
■ CNN: “McConnell has for months now been the plug halting … gun measures.”
■ Senator and presidential candidate Kamala Harris: “This is, actually, literally in the hands of one person … and it’s Mitch McConnell.”
■ An ex-Arizona congresswoman who survived a 2011 shooting is calling on McConnell to apologize for joking about the deaths of his political opponents.
■ The Trib’s Rex Huppke condemns politicians “kneeling in church on Sunday to properly transmit prayers to the people who loved all those bloodied bodies, then walking to work Monday to do nothing.”

Police vs. judges. Ratcheting up tension with the Cook County courts, Chicago Police Supt. Eddie Johnson has rolled out a public database in which his department is tracking the bonds judges set for gun crime defendants—and how many of those defendants go free because they post the cash.
■ Johnson: “I do need [judges’] help on … sending that message of accountability.” 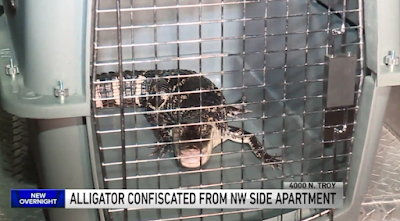 Another alligator. Chicago police acting on a search warrant last night recovered guns, narcotics and a three-foot alligator from a Northwest Side home. (Screenshot: WGN-TV News.)
■ The Cook County medical examiner’s office has identified the man who died at Lollapalooza.
■ Mayor Lightfoot vows to do better at next year’s Lolla.

Boy Scouts of Assault. A lawsuit accuses the Boy Scouts of failing to stop hundreds of previously unreported sexual predators …
■ … including teachers, doctors and a small-town mayor.

‘Another nail in the coffin for the state of our news and information system.’ A former FCC commissioner mourns a deal to combine the nation’s two largest newspaper publishers.
■ It coulda been Chicago-based Tribune Publishing.

Nobel winner Toni Morrison dead. The acclaimed author of Beloved and Song of Solomon has succumbed to what the family says was a short illness.
■ The Washington Post: She “helped transfigure a literary canon long closed to African Americans.”

Barneys: Bye. The luxury chain has filed for bankruptcy protection and is closing its stores in Chicago and one suburb …
■ … and it’s not the first time …
■ … but Krispy Kreme is coming to the Loop’s Block 37 mall. 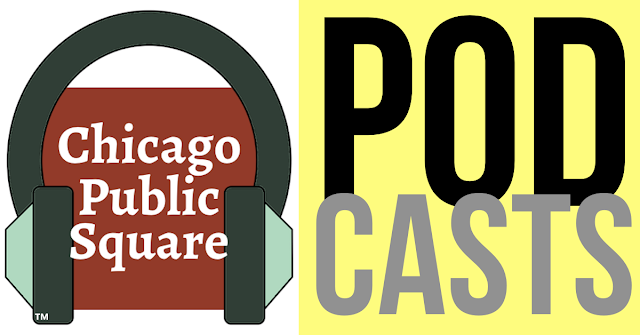