Trump’s ‘more.’ Updating coverage: After a weekend of cross-country mayhem, President Trump is vowing “to act with urgent resolve” to strengthen the nation’s gun regulation—but he offered no details, and he’s dropped that ball before. 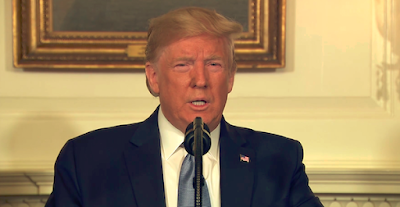 ■ The Washington Post: Eight reasons to be skeptical Trump is serious about guns.
■ He did finally also condemn “racism, bigotry and white supremacy.”
■ But he got one of the victimized cities wrong.

‘The baby still had her blood on him.’ The victims in El Paso, where 20 people died and more than two dozen were hurt at a Walmart heavily patronized by Mexican and Mexican-American families, include a woman who died protecting her 2-month-old son—and her husband, who died protecting her.
■ A Texas congresswoman representing El Paso says Trump is “not welcome” there because he “has made my community and my people the enemy.”

Walmart’s guns thing. The Washington Post details the company’s complicated history with the sale of firearms. 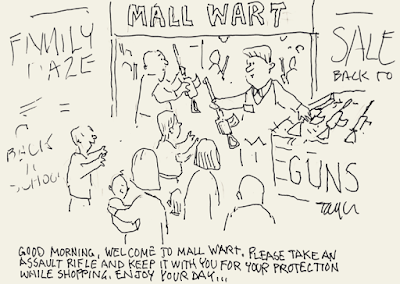 ■ Music biz analyst and social critic Bob Lefsetz: Walmart “needs to stop selling guns immediately.” (Cartoon: Keith J. Taylor.)
■ Sun-Times columnist Neil Steinberg says change in the nation’s gun regulation is possible, but not while “our leaders are cowards, bought off by the gun industry.”
■ A Sun-Times editorial: “We are tired of thoughts and prayers. … It’s about the guns.”

The shooters.
■ The El Paso suspect seems to have posted a racist, anti-immigrant pre-massacre manifesto that predicted “I’m probably going to die today”…
■ … but he was wrong.
■ The attacker at a bar in Dayton, Ohio, whose victims included his sister, described himself on Twitter as a leftist …
■ … but he was killed, and his motives remained mysterious.

‘Video games that celebrate violence.’ Trump blames the massacres in part on digital entertainment …
■ … but the Post calls that “an old claim that’s not backed by research.”
■ Remember when comic books got the blame for juvenile delinquency?
■ Cloudflare, the company providing internet support for 8chan—the website the El Paso suspect used to post his hateful thoughts—has cut off its service …
■ … because, Cloudflare’s founder explains in a blog post, “they have proven themselves to be lawless and that lawlessness has caused multiple tragic deaths” …
■ … but 8chan wasn’t dark for long.

Chicago’s ‘slow-motion massacres.’ Politico’s Shia Kapos says Chicago’s gun violence seemingly gets ignored.
■ At least 51 were shot over the weekend here—at least seven fatally.
■ Chicago Police Supt. Eddie Johnson: “We believe that there may have been some type of planned violence.”
■ A Tribune editorial: “There is a streak of madness … in El Paso, in Dayton, and in Chicago.”
■ Washington Post media columnist Margaret Sullivan calls for an end to news coverage as usual: “There actually is a right or wrong side on the matter of controlling rampant gun violence. Journalists need to be on the right side.”

Unrelated developments.
■ U.S. Senate Republican leader Mitch McConnell fell at his Kentucky home and fractured his shoulder.
■ A Washington State woman has given a home to—and named—more than 200 tortoises.

Hottest. Ever. Last month was Earth’s warmest on record.
■ A scientist is quitting Trump’s Agriculture Department because of the administration’s dismissal of the climate crisis: “It feels like something out of a bad sci-fi movie.”

Batman, for ‘real.’ The actor who’s probably portrayed the character for more on-screen hours than anyone else—cartoon voice Kevin Conroy—is finally going to wear the cape in a live-action role.
■ Here he is in a 1993 interview, about five months after the groundbreaking animated series’ debut.

Thanks. To Chicago Public Square readers—including Maureen Kelly—whose support keeps this service coming. You can join them here.