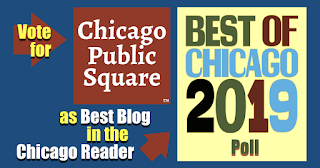 If every person reading this edition of Chicago Public Square were to vote for Square as “Best Blog” in the Reader’s Best of Chicago poll … well, that would be awesome. Got a few seconds to spare before we get on with the news?

Mall death. A 2-year-old girl is dead after what police say was a display fell on her in an Orland Square Mall clothing store.
■ A 16-year-old girl was shot and killed last night outside a suburban convenience store.

Center cut. Chicago’s spaceshippy but decaying James R. Thompson Center—some Democrats may prefer its original name, the State of Illinois Center—is a step closer to sale by the state.
■ Demolition’s about to begin at McDonald’s abandoned Oak Brook HQ …
■ … and it’s curtains for a 44-year-old suburban hot dog drive-in spot.

Another one rides the bus. Add Illinois Congressman Bill Foster to the list of those in favor of an impeachment inquiry into President Trump’s behavior. 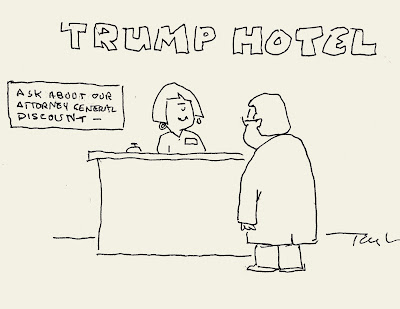 ■ Trump’s attorney general has raised ethical alarms by booking a $30,000 personal holiday bash at the president’s D.C. hotel. (Cartoon: Keith J. Taylor.)
■ Before the rooster crowed today, Trump denied three times an Axios report that he advocated attacking hurricanes with nuclear weapons. But Axios stands by its reporting.
■ TV critic Aaron Barnhart: A new Netflix movie from the Obamas couldn’t have come at a better time, but, he says, “Watch it with others—your friends, coworkers, hell, even your uncle.”

‘Trump is crushing us.’ Democratic National Committee members around the country are sounding an alarm to The Daily Beast about Republican ads “carpet-bombing” voters in Midwestern battleground states.
■ The Illinois Farm Bureau is sending the president a message on his trade war: “Enough is enough.”
■ Video from Mississippi shows voting machines overriding a man’s Republican primary gubernatorial choice, changing it to a vote for the guy who won—and who is aligned with the president.
■ Viral video shows a teenager registering people to vote as they awaited chicken sandwiches at Popeye’s …
■ … whose stores have officially sold out.

Reptile romance. “Alligator Robb”—Frank Robb, the guy who captured Chicago’s fugitive gator—now has a Chicago girlfriend.
■ The Intercept spotlights a top donor to President Trump and Senate Majority Leader McConnell—a guy who also happens to be a driving force behind the deforestation of the Amazon.
■ Satire from The Onion: “Amazon Deforestation Reveals Tribe Of Isolated Rich Sociopaths Completely Untouched By Consequence.”

Amazon’s watching. The Washington Post reports Amazon subsidiary Ring has launched partnerships with more than 400 U.S. police forces to share homeowners’ security camera footage.
■ An interactive map shows which towns are in the program.
■ Got a doorbell camera? Here are some etiquette tips.
■ Speaking of watching: CW Network shows get a new home on the Chicago dial Sunday.
■ And a clown is loose in Logan Square.

But maybe President Trump is interested? A Lowe’s vice president is apologizing for telling employees, in an in-house video, that a compact drill is “perfect” for “some of our Hispanic pros with smaller hands.”
■ Gov. Pritzker has signed a law requiring publicly traded companies to report annually on their boards’ demographics and plans for promoting diversity.

Do you find Square useful? Your support—just a few bucks a month—helps keep it coming.