Keep those votes coming. If everyone reading this edition were to vote for Chicago Public Square as “Best Blog” in the Reader’s Best of Chicago poll, we’d have a chance to beat Square’s second-place showing last time.* Got a few seconds to spare? And now the news:

‘Complete contempt for our climate.’ Updating coverage: Environmental advocates are sounding the alarm about Trump administration plans to relax oversight of global-warming methane gas …
■ … a change that The New York Times reports even major oil and gas companies have opposed.
■ Also in the Times: “The growing intensity of wildfires and their spread to new corners of the globe raises fears that climate change is exacerbating the dangers.”
■ New research: Europe is warming faster than climate models projected.

‘Potentially devastating.’ Updating coverage: Hurricane Dorian was on track to reach the U.S. mainland as early as late Sunday, menacing “the whole state” of Florida … 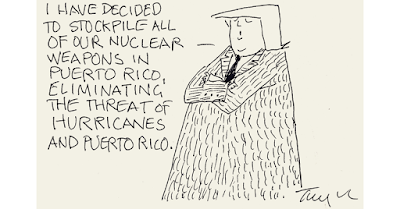 Candidate down. Kirsten Gillibrand isn’t running for president anymore.
■ The Daily Beast looks back to a time when Joe Biden echoed the conservative narrative of “welfare mothers driving luxury cars.”

Lightfoot’s big speech. Promising to outline “a path forward” out of Chicago’s budget crisis, Mayor Lightfoot tonight delivers a “state of the city” address …
■ … which you can watch and listen to on-air and on the web beginning at 6 p.m.
■ WBEZ serves up an illustrated guide to the city’s fiscal woes.
■ The Chicago school board has approved its biggest budget ever …
■ … and approved new rules limiting cops’ role in the city’s schools.

Who is—or was—a cop? The Chicago Reporter explains how it won access to the names of 33,280 current and former city police officers dating back to the mid-’40s—and why it’s important.
■ Search the Reporter’s updated database to find out whether a Chicago cop was involved in a misconduct settlement.

‘Potential harm to the brain is real.’ Echoing early warnings about tobacco use, the U.S. surgeon general is out with a new report counseling against marijuana use by young people and pregnant women.
■ A Sun-Times editorial: Don’t trust the vaping industry on e-cigarettes’ safety.

‘A typical woman’ should ‘carefully manage her priorities, or she will be swept along by the wicked zeitgeist that will encourage her to get more degrees.’ Outed for statements like that on social media, a Concordia University regent is gone …
■ … but the university had yet to condemn his opinions.

Forever: Not so long after all. The Forever 21 retail clothing chain is near bankruptcy.
■ An uncle is among those mourning a 2-year-old girl killed in the collapse of a structure at Orland Square Mall: “I just wish I could hear her one more time.”

* That was a contest for “Best News Site”—a category the Reader’s abandoned this time—and Square finished behind a website that no longer exists. So your vote can make a difference this time. Do it now. Because who wouldn’t like to brag about reading Chicago’s best blog?