A big question. The Cut’s Sarah Jones ponders Sen. Elizabeth Warren’s retort at last night’s presidential debate: “I don’t understand why anybody goes to all the trouble of running for president of the United States just to talk about what we really can’t do and shouldn’t fight for” …
■ … a statement USA Today ranks as the night’s No. 1 top moment.
■ Candidate John Delaney, at whom that barb was aimed: “That’s the response when someone really can’t defend their plans.”
■ Esquire: Delaney is “running for chief killjoy.”
■ Delaney’s Wikipedia page was vandalized to say he died last night.
■ The Atlantic: The debate made clear Democrats “have to get Republicans out of their head.”

‘Is it me or is Marianne Williamson making a lot of sense?’ That’s a question Vox’s Emily Stewart is asking about the presidential candidate and self-help author.
■ The Los Angeles Times: Williamson proved “more than just a meme-worthy figure when she directly called out systemic racism.”
■ Montana Gov. Steve Bullock and Warren split over the question of whether candidates should pledge never to be first to use nuclear weapons …
■ … but Bullock mispronounced “nuclear.”
■ Why didn’t candidate Tim Ryan place his hand over his heart as the national anthem played? (Cartoon: Keith J. Taylor.) 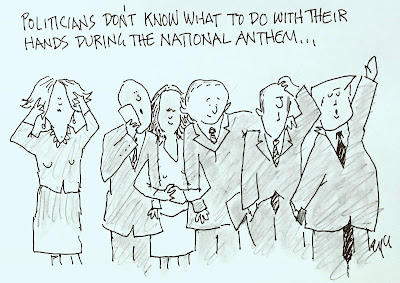 ■ The oldest and youngest candidates on the stage—Bernie Sanders and Pete Buttigieg—agreed it’s about vision, not age …
■ … but Buttigieg highlighted his youthfulness at least seven times last night.

The night’s winners and losers? Here are takes from Vox, CNN and PoliticusUSA.
■ Who talked the most?
■ PolitiFact scrutinizes the night’s questionable statements.
■ Read the debate transcript.
■ Variety TV critic Caroline Framke: “CNN’s first debate felt more substantive than NBC’s” …
■ … but Daily Kos says the event was marred by “moderators bent on forcing [candidates] to address right-wing talking points.”
■ Four things to watch in tonight’s Round 2.

‘Deep divisions on health care.’ The Washington Post says “the debate’s first 25 minutes was spent in what amounted to a boxing match” pitting Warren and Sanders—who are pushing to replace private insurance plans with generous government coverage—against most of the others onstage.
■ Sanders’ mic-drop reply when Ryan asked if he could guarantee his “Medicare-for-All” plan would improve union members’ health care—“I wrote the damn bill”—is already a sticker and a T-shirt (from Square advertiser Raygun). 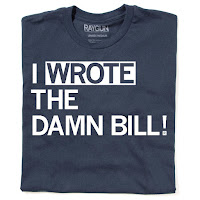 ■ The Arm and a Leg podcast on health care explains what happened when Chicago researchers sent actors—wired for sound and pretending to be patients—into doctor’s offices to find out how well doctors actually listen.
■ Columnist Neil Steinberg is regaling readers with an account of his summer so far: Getting ready for, enduring, then recovering from spinal surgery.

‘He’d better give them something good.’ The Sun-Times’ Mark Brown says Chicago ex-Teamsters boss John Coli’s “conviction and cooperation [with prosecutors] should be understood to be every bit as significant as any alderman known to be under investigation, other than Ed Burke.”
■ A Sun-Times editorial: Coli’s guilty plea raises the curtain on “a seamy underside of the film industry in Chicago.”
■ The city’s Building Department has rejected the latest appeal of Windy City Rehab’s costars—keeping them from doing their thing in Chicago.

No they can’t—yet. A federal review concludes plans for the Obama Presidential Center would have an “adverse impact” on Jackson Park, spelling further delays for the project.
■ FiveThirtyEight: Barack Obama’s record on immigration “could emerge as an important dividing line” in the Democratic presidential primary.
■ Most of the senior staff of the Democratic Congressional Campaign Committee—presided over by Illinois Rep. Cheri Bustos—is out after what Politico calls an “uproar over diversity.”

Thank you. Readers including Ralph Sherman, Reed Pence, the Rev. Alan Taylor, RF Davis, Richard Milne, Robert Clifford, Ronald B. Schwartz and Roy Plotnick keep Chicago Public Square coming. You can join them here for as little as $5 a month. Or, if you reallyreallyreally like Square, more.

■ And thanks to the one thousand fans who’ve now liked the Chicago Public Square page on Facebook.