… And we’re back. Because: The Legion of Chicago Public Squarians. (See below.)

Who’s in your wallet? Updating coverage: Personal info from more than 100 million people—including Social Security and bank account identification—has been breached in a massive hack at Capital One Financial.

■ Capital One’s weaselly official statement includes this: “No bank account numbers or Social Security numbers were compromised, other than: About 140,000 Social Security numbers of our credit card customers [and] about 80,000 linked bank account numbers of our secured credit card customers.”
■ How to tell if you’ve been affected.
■ What to do if you were.
■ TechCrunch editor Zack Whittaker: “Capital One’s breach was inevitable, because we did nothing after Equifax.”
■ Depending on how much work you did to undo damage in the Equifax hack, here’s how you could get $625 for your troubles …
■ … but don’t count on it.

‘It’s a scam.’ The University of Illinois at Urbana-Champaign’s undergraduate admissions director tells ProPublica Illinois dozens of suburban families have been giving up legal custody of their kids to exploit a loophole and win financial aid the students wouldn’t merit otherwise.
■ ProPublica is encouraging college journalists of color to apply for its paid Emerging Reporters Program.

How safe is Lolla? Mayor Lori Lightfoot today planned to join a training exercise to ensure Chicago’s Lollapalooza festival is ready to prevent or respond to violence like the shooting spree Sunday at the Gilroy (California) Garlic Festival.
■ Chicago Rep. Dan Lipinski was in Gilroy when it happened.
■ The gunman seems to have had—surprise!—white supremacist proclivities.
■ Gunfire has left at least two dead and a police officer hurt at a Walmart in Mississippi.
■ A Philadelphia Inquirer editorial mourns a lack of national attention to a Sunday night shooting that killed one and hurt five: “What we’ve come to view as the ‘classic’ mass shooting … impacts mainly white people.”

Senseless. Colleagues are mourning the killing of two Chicago moms who worked with the group Mothers Against Senseless Killings.
■ Police: “This is still very much under investigation.”
■ The Chicago inspector general’s office says Chicago police are ignoring rules requiring the random review of cops’ body-worn cameras.
■ An Edgewater resident to Block Club Chicago: “My Neighbor Attacked Me Because I Threw Dog Poop On His Porch For Months.”

Together at last. The first of two nights of Democratic presidential candidates delivers a long-awaited matchup: Bernie Sanders and Elizabeth Warren on the same stage at the same time.
■ But this could be the last hurrah for maybe half the candidates.
■ RealClearPolitics: The candidates are ready to mix it up over racial justice.
■ The debates’ setting—Detroit, not far from General Motors’ HQ—has GM on alert for criticism.
■ CNN will stream the debates online live and free—even to nonsubscribers.

‘Divisiveness serves a president who wants his constituents to live in fear of each other.’ But the Tribune’s Heidi Stevens says she worries about the “long-term damage” if we ignore Trump’s tweets …
■ … like those in which he condemned Baltimore—home to his congressional nemesis Elijah Cummings—as a “rat and rodent infested mess” … 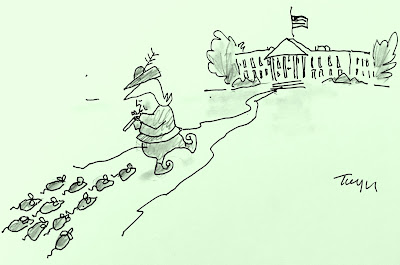 ■ … language that has for centuries served as a racist trope. (Cartoon: Keith J. Taylor.)
■ The president failed to mention that his son-in-law is landlord to vermin-filled Baltimore properties.
■ Trump doubled down this morning, lying: “I’m the least racist person there is anywhere in the world.”
■ CNN’s Brian Stelter: Fox News consistently fails to acknowledge its role in Trump tweetstorms.

Shot thrown away. The Trib’s Chris Jones blames the failure of “Hamilton: The Exhibition”—which is closing months before planned and weeks before the dates of tickets already sold—on its lousy “location, location, location.”
■ Mayor Lightfoot wants Chicagoans to take a poll to help determine where the city should put a new casino.
■ The Trib’s Kristen McQueary: Downtown is “the only location that makes sense.”

Goodbye, Columbus? A notion sunk in the Chicago City Council three years ago may sail again: Renaming the city’s Columbus Day celebration “Indigenous People’s Day.”
■ In a court case likely to send shudders through Chicago’s halls of power, a clout-heavy ex-labor leader was set today to plead guilty to extortion charges.
■ A Chicago restaurant named “City Hall” is offering 20% off the cost of a meal on Tuesdays to anyone who presents a city parking ticket.

Chicago Public Square comes to you through the generosity of supporters including Nile Wendorf, Nora Schlesinger, Owen Youngman, Patricia Skaja, Paul Clark and Peter Kuttner. Please consider joining them in The Legion of Chicago Public Squarians.