Want to live in Tribune Tower? The companies redeveloping a Chicago newspaper landmark have begun to market the “elegantly stunning luxury residences” they’ll carve out of the joint … 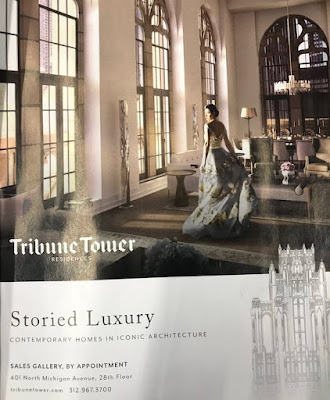 ‘I am tempted to say that I am ashamed of my own industry.’ Journalist and journalism professor Jeff Jarvis says the newspaper industry “study” of Google’s impact on the news business (cited in yesterday’s Chicago Public Square) is “humiliating.”
■ Politico’s Jack Shafer on the protectionist legislation the newspaper industry’s pushing: “If consumers are deliberately spurning newspapers en masse and flocking elsewhere for news and advertising, it’s not the business of Congress to steer them back.”
■ A veteran Springfield TV weather forecaster has been missing from the airwaves since criticizing the station’s owner, the odious Sinclair Broadcast Group.
■ The Sun-Times’ Rick Morrissey: “I wish we could talk just about baseball. But the Ricketts family keeps making that harder.”

‘I caveated it.’ Mayor Lightfoot is defending herself against criticism for sharing a rumor the Chicago police union has been encouraging cops to take it easy on violent crime.
■ A Chicago cop faces charges of homicide and driving under the influence after crashing his car into a South Side restaurant, killing a woman who was sitting inside.
■ Politico: An alderman is ticked off at Illinois Supreme Court Justice Anne Burke—wife of indicted Chicago Ald. Ed Burke—for naming a white woman to a judicial seat representing a predominantly black West Side community.

Bike path crash. A driver was critically hurt when a car drove off Lake Shore Drive and into the nearby lakefront bike route—raising new questions about the safety of those lanes.
■ A doctor’s hoping to locate a hero nurse who helped save the driver’s life. 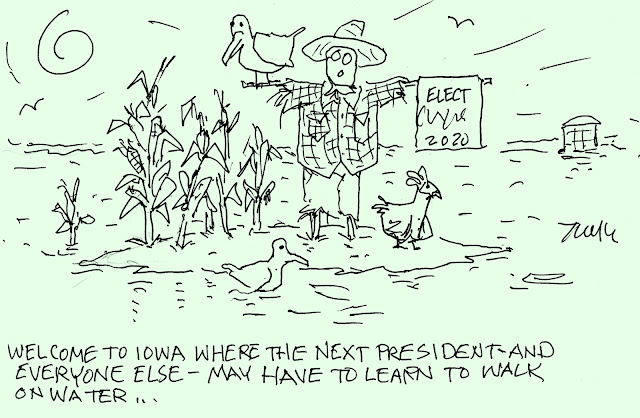 Shrimp alert. The Midwest’s record spring rains have washed vast amounts of nitrogen and phosphorous into the Mississippi River and down into the Gulf of Mexico, triggering creation of a record-large oceanic dead zone that threatens the food chain and the fishing industry.
■ Welcome to Hell World blogger Luke O’Neil: “Everyone likes to think that when the water goes away they’re going to turn into Mad Max … but in reality we’re probably just going to sit there and die and that’s the best case scenario I sometimes think when I think about the end of the world.”
■ In remarks prepared for delivery in Davenport, Iowa, today, presidential candidate Joe Biden slaps President Trump for inaction on the environment. (Cartoon: Keith J. Taylor.)
■ Trump will be in Iowa today, too.
■ The first Democratic presidential primary debate later this month will have five—count ’em, five—moderators.

‘Beating a vertebrate animal.’ That’s the charge against three people caught on video abusing young calves at a northwest Indiana dairy farm.
■ The Chicago-based Fairlife milk company, controlled in part by the Coca-Cola Co., concedes it’s lost business since the scandal broke at one of its suppliers—but it says it plans no layoffs.
■ Newly filed court documents accuse Johnson and Johnson—you know, the baby powder company—of quietly dominating the opioid market for years.

Trump’s ‘multiple crimes.’ A former U.S. attorney testified to Congress yesterday about the Mueller report: “If anyone other than a sitting president had committed this conduct, I am confident that he would be charged.”
■ Another former U.S. attorney testified the case would be a slam-dunk: “I would be willing to personally indict the case and to try the case. I would have confidence that the evidence is sufficient to gain a guilty verdict and win on appeal.”
■ The only Republican in Congress to call for Trump’s impeachment has quit the reactionary Freedom Caucus, which he helped found.

The U.S. Army is coming. Its marketing operation is moving from its HQ near the Pentagon to Chicago—where the ad-agency talent is.
■ Speaking of talent: Paul McCartney plays the Quad Cities tonight.