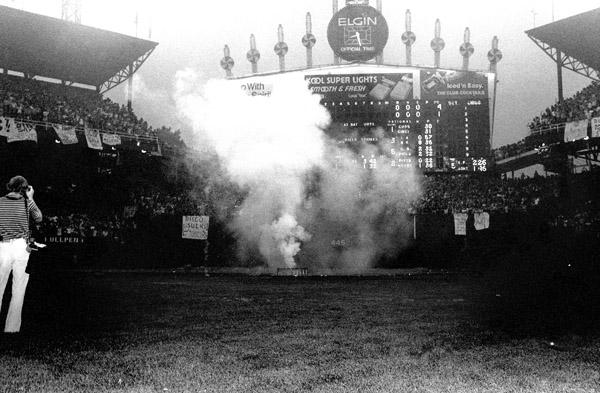 ‘Demolition’ admonition. As the White Sox prepare to give away T-shirts tonight commemorating the 40th anniversary of the team’s disastrous “Disco Demolition Night” promotion, Vice’s Josh Terry writes: “‘Disco Demolition Night’ Was a Disgrace, and Celebrating it Is Worse.” (Photo: Paul Natkin.)

■ The 1979 event’s architect, radio host Steve Dahl, dismisses suggestions the night was racist and homophobic: “We blew up disco records, made fun of the Bee Gees and Saturday Night Fever. It goes no deeper than that.”
■ The Tribune’s Paul Sullivan was there that night, and Phil Rosenthal was close.

Get ready to dig deeper. Mayor Lightfoot says, “There’s no question that we are going to have to come to the taxpayers and ask for additional revenue.”
■ At yesterday’s City Council meeting, her allies reversed “an embarrassing defeat” in committee, winning approval for close to $5 million in legal settlements.
■ The mayor’s doing something new at council meetings: Asking aldermen to explain when they abstain from a vote …
■ … as she pushes even more substantial ethics rules for council members.
■ The successor to the alderman the Sun-Times’ Fran Spielman describes as “disgraced Zoning Committee chairman-turned-FBI-mole Danny Solis” wants a full review of all the permits and license requests Solis championed during his 23 years on the council.
■ A new report from the city’s inspector general finds the Chicago Police Department has dragged its feet on problems with the police presence in the city’s schools. 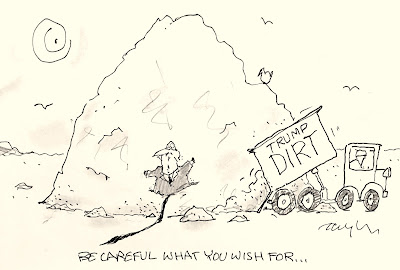 Got dirt? President Trump told ABC News he might not alert the FBI if foreign governments offer damaging information against his 2020 rivals …
■ … and he said, “I don’t think in my whole life I’ve ever called the FBI”—but he’s wrong.
■ NBC News: “What’s stunning is that everyone should now know that the sitting president of the United States cannot ensure a fair election in 2020.” (Cartoon: Keith J. Taylor.)

Biden’s girl thing. The ex-vice president’s repeated insistence that men protect the young women he meets reveals what Chicago writer Emma Roller says is Joe Biden’s need “to alert these girls … to the fact that he finds them very attractive, and therefore they are in danger.”
■ Stephen Colbert mocks Biden’s name-dropping of the Obama family: “We get it. You know Barack Obama.”
■ A Los Angeles Times columnist says Daily Show host emeritus Jon Stewart “left TV at the worst possible time.”

Uberpocalypse. Streetsblog Chicago’s John Greenfield says Uber’s fouled-up party for drivers at the Museum of Science and Industry demonstrates “why ride-hailing is awful for cities.”
■ Tom Chambers at The Beachwood Reporter: “I hate Uber. … As a frequent pedestrian, they make my life miserable.”

Thanks … to reader Mike Braden for sounding the alarm on a missing quotation mark in the Uber coverage above.