If you’re reading Chicago Public Square for free, you’re in the debt of people whose support keeps it coming. Please consider joining them to help cover production and distribution costs. And now, the news:

‘This difficult time.’ A family spokeswoman says the newborn baby cut from his mother’s womb April 23 has died of brain injuries.
■ A woman and her 24-year-old daughter face first-degree murder charges in the case, with more now likely to follow.

Chicago’s ‘hot mess.’ ProPublica Illinois runs down a task force’s recommendations for fixing the city’s regressive parking ticket and debt collection practices.
■ A Sun-Times editorial: “We don’t want the least fortunate among us to be saddled with unfair, crushing debt.” 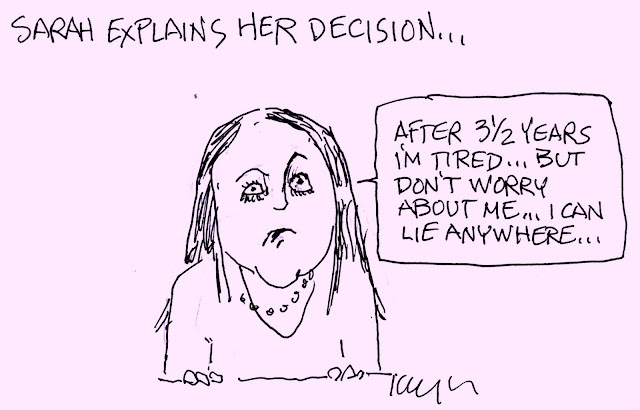 ‘Queen of Gaslighting.’ The Washington Post’s Margaret Sullivan says departing White House press secretary Sarah Huckabee Sanders “misled reporters or tried to, and through them, misled the American people.”
■ Wonkette’s Stephen Robinson is less, um, measured: “Don’t let the door hit you where Beelzebub split you.” (Cartoon: Keith J. Taylor.)
■ The Daily Show’s Trevor Noah on Sanders’ resignation announcement: “We know that this is true because she’s denied it.”
■ President Trump’s cagy on who’ll get the job next: “I know a lot of people that want it … and sometimes you have so many that it makes it more difficult.”
■ Even one of Fox News’ mainstay commentators concedes, “The president of the United States of America is prepared to commit a felony to get re-elected.”
■ Despite a finding—from an office headed by one of the president’s appointees—that White House aide Kellyanne Conway should be fired, Trump says he won’t do it.
■ The Onion: “Conway Decides To Lie Low Until Rule Of Law Dies Down.”

Who’s on, who’s off. Here’s who’ll make the stage for the first Democratic presidential debate.
■ But the Democratic National Committee is resisting calls for a debate focused on the climate crisis.

‘$#!% No!’ That’s FiveThirtyEight’s answer to the question “Should we take these early general election polls seriously?”
■ Unrelated development: University of Iowa research finds Iowa is No. 1 in producing No. 2—and that’s not good for the environment.

Weatherman fired. The insecure and Trump-friendly Sinclair Broadcast Group has fired veteran Springfield meteorologist Joe Crain, who criticized the company’s dictum that bad weather news be sensationalized.
■ Stephen Colbert mocked the company’s decision.
■ Springfield’s free Illinois Times newspaper has posted a musical ode to Crain.
■ The New York Times’ David Leonardt: “Parts of the Midwest that experts thought would flood only once every 500 years have been overrun.”
■ Chicago magazine’s Edward McClelland: “Chicago Could Use a Wind Farm. How About South Works?”

Car-dealer clusterf__k. Illinois Secretary of State Police are wrestling with hundreds of complaints against a suburban car dealership that closed this spring.
■ A new ranking puts Illinois third from the bottom for U.S. nursing home quality.

Everybody’s doing it. Even chicken-processing company Tyson Foods is getting into the plant-based protein business.
■ Plans to move Chicago’s Mamby on the Beach EDM-oriented music festival to Montrose Beach in August have run afoul—or is it a-fowl?—of the Chicago Ornithological Society.
■ Five tips for this weekend’s Pokemon Go Fest in Grant Park.

Disco disquisition. The White Sox commemoration of the team’s infamous Disco Demolition stunt 40 years ago went off less eventfully than the original.
■ The original event’s architect, radio host Steve Dahl, last night addressed critics who condemned it as racist and homophobic: “Maybe we weren’t woke, but we didn’t know we were asleep.”

Thanks … to reader Pam Spiegel for some punctuation refinements this issue.