School’s out. Chicago Mayor Lori Lightfoot has dumped the entire Chicago School Board—aiming to nominate replacements “who have children in the system or have themselves been a part of the CPS system.”
■ Lightfoot’s bodyguard detail chief has a few issues.

‘The problem did take me back.’ The acting Illinois State Police director was apparently surprised by a Tribune analysis that found as many as 30,000 guns may still be in the hands of state residents deemed too dangerous to have them.
■ See how many people in your community have lost their firearm ownership rights but haven’t accounted for their guns.
■ USA Today and Chicago’s Invisible Institute: At least 30,000 law enforcement officers across the country have lost certification …
■ … and you can search for them by name, state or agency.

CTA security watch. Chicago police will patrol mass transit in greater numbers through the Memorial Day weekend.
■ Politico asks: If you could do anything, how would you change transportation in your city?

Killer twister. Updating coverage: A tornado that hit Missouri’s capital city head-on overnight [clarifying] was part of a swath of storms that killing killed at least three people elsewhere in the state, and leaving others injured and trapped in buildings.

We’re No. 3—for now. The latest population stats show that, despite a shrinking count, Chicago remains the nation’s third most populous city—but Houston is closing in.
■ A bill to demolish and replace the oldest part of McCormick Place is on the table in the General Assembly.
■ High Lake Michigan water levels mean trouble for the Rogers Park shoreline.

They, robot.
■ See it in action.
■ See trash on the Chicago River? An app will let you direct a “Trashbot” to snare it. 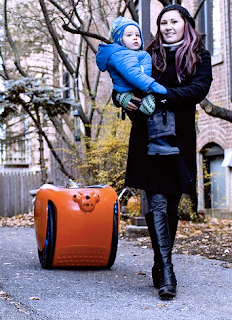 ■ On Gov. Pritzker’s desk: A bill that would legalize personal “robotic carrying devices”—like a wagon crossed with a Roomba. (Shown here: Piaggio’s Gita.)

■ Among the “fan mail” Trib columnist Rex Huppke’s been getting from readers: “Please have sex with a robot hope you live long in pain.”

‘I did not say it was murder.’ But freshman Illinois Rep. Lauren Underwood’s assertion that the growing death toll among migrant children in U.S. custody is the result of the administration’s “intentional” policy so troubled Republicans that they voted to strike her words from the record.
■ The Illinois congresswoman who heads the Democratic Congressional Campaign Committee has bailed on a fundraiser for conservative Chicago Democratic Rep. Dan Lipinski.