No Chicago Public Square Monday. Back Tuesday. Get news updates between editions by following Square on Facebook and Twitter. And now the news:

Holiday hopes. Mayor Lightfoot and Chicago police have big plans to stem Chicago’s traditional Memorial Day weekend shootings, which Politico’s Shia Kapos says “have become as synonymous with the three-day stretch as backyard barbecues.”
■ Police say a homeowner shot an intruder in Uptown early today.
■ Lightfoot’s rejecting as “a terrible idea” her controversial security chief’s plan to bring in the National Guard to patrol Chicago’s high-crime neighborhoods.
■ Comedian D.L. Hughley, who’s playing Schaumburg this weekend, says he’s sick of people elsewhere in America “using Chicago like a whipping board.”
■ Chicago’s beaches are officially open for the summer.
■ Lightfoot has been honing her parliamentary skillz in anticipation of her first full City Council meeting.

‘Bag taxes work.’ The Tribune’s Eric Zorn says those extra pennies assessed on people who need something in which to carry their retail purchases serve as “a tiny reminder to do better by the environment, not just when I shop but in all areas of life”—but therefore may not provide the budgetary boost Illinois lawmakers hope.
■ Food truck owners called them unfair, but Chicago’s food truck regulations have survived an Illinois Supreme Court challenge.

Illinois’ climate crisis contribution. The Better Government Association says the biggest source of greenhouse gases in Illinois is no longer coal plants, but instead is …
■ An appeals court has revived a class-action lawsuit that could force Chicago to replace thousands of water pipes made with brain-rotting lead.
■ An assessment of the Cook County assessor’s office finds it miserably lacking resources to evaluate the county’s real estate—citing a staff about one-quarter the size it should be and ancient green-screen computer technology.

Cubs TV tax. Sox fan? Not a sports fan at all? If you get cable TV, the Trib reports, your bill may be headed up anyway to pay for the Cubs’ new TV network.
■ Reigning Jeopardy! champ and Naperville native James Holzhauer admits he bet against the Cubs in 2016.
■ He racked up win 26 yesterday. 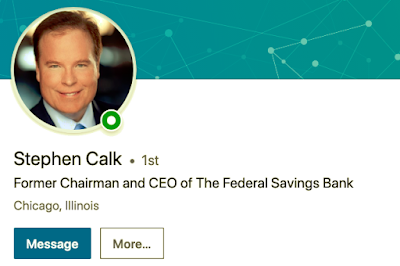 Failed bank shot. Chicago banker Stephen Calk faces federal charges of financial institution bribery, accused by prosecutors of trying to leverage $16 million in risky loans to President Trump’s then-campaign manager Paul Manafort into a Trump administration job.
■ Weird feeling of the day: Your Square publisher has been a first-degree connection to Calk on LinkedIn since 2012—but can’t remember how or why.
■ President Trump’s treasury secretary is under fire for his role in Sears’ downfall. 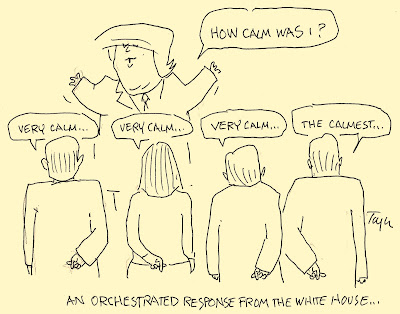 Trump-Pelosi wars. The president and the speaker of the House are accusing one another of being unwell.
■ The president’s been tweeting “doctored” video of Speaker Pelosi.
■ Esquire’s Charles Pierce: “The President* Is Acting in Pure Paranoia. There’s Nothing Funny About This.”
■ The Sun-Times’ Neil Steinberg: “Will Trump supporters begin to suspect something is wrong?”
■ The Onion: “Trump Warns China Not To Underestimate His Willingness To Sacrifice Every American’s Well-Being.”

‘For the first time in the history of our country, the government has brought criminal charges against a publisher for the publication of truthful information.’ The American Civil Liberties Union is condemning the Trump administration’s Espionage Act charges against WikiLeaks founder Julian Assange.
■ Wired: This is an assault on press freedom.
■ Separately, the administration is proposing to reverse sex-discrimination protections in health care for transgender people.

The Rolling Stones giveth. Ending a 22-year dispute, Mick Jagger and Keith Richards have agreed to let The Verve’s Richard Ashcroft collect royalties for the classic song Bitter Sweet Symphony …
■ … which sampled this orchestral version of the Stones’ The Last Time. 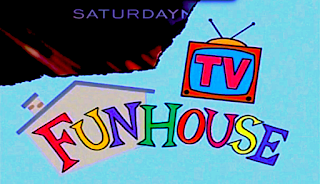 You know those Saturday Night Live “TV Funhouse” cartoons? Thank Chicago native J.J. Sedelmaier not only for those, but also for being someone whose support keeps Chicago Public Square coming to the vast majority of readers—more than 88 percent, to be more precise—free. So you’ll be in good company if you join him here.
Email ThisBlogThis!Share to TwitterShare to FacebookShare to Pinterest
← Newer Post Older Post → Home