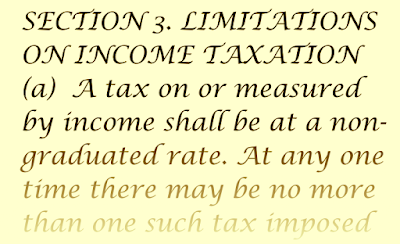 Historic moment. Illinois voters next year get to decide whether to legalize different tax rates for the wealthy.
■ Amazon founder Jeff Bezos’ divorced wife, MacKenzie Bezos, plans to give nearly half her $37 billion fortune to charity—and she says she won’t wait until she’s dead.
■ ProPublica: Illinois lawmakers voting on higher taxes for video gambling hold previously secret ties to the gambling industry.
■ Clergy for a New Drug Policy: Don’t wait to legalize marijuana in Illinois.

A secret vote for judges. In a little-noted process, Injustice Watch reports, publicly elected Cook County circuit court judges* are casting secret ballots this month to determine which of 138 associate judges get to keep their jobs—even though, in the words of one of the voting judges, “most of us have no idea as to whether associate judges do their job and do it adequately.”
■ A Tribune editorial: The Illinois Supreme Court gave food truck owners a raw deal.
■ The U.S. Supreme Court has cleared an Indiana law requiring burial or cremation of fetal remains after an abortion and let stand a Pennsylvania ruling that allowed transgender students to use bathrooms that match their gender identity.

42 shot. Chicago’s Memorial Day weekend mayhem total includes at least that many shooting victims—at least seven of them dead …
■ … including one dead and two wounded along the 606 biking and hiking trail through Logan Square.

Lightfoot’s first trial. Tomorrow’s City Council meeting will test new Mayor Lori Lightfoot’s ability to bend aldermen to her will.
■ A Trib editorial: “Aldermen can pick transparency and progress by supporting the changes or they can cling to the machine.”

Twisters’ trail. Updating coverage: A line of possible what may have been tornadoes left a swath of destruction across Indiana and Ohio. 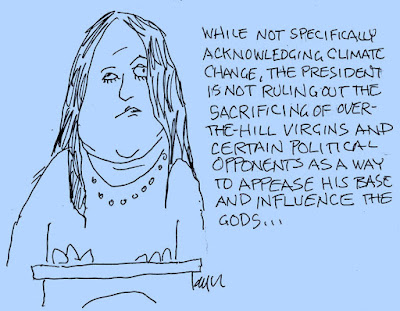 ■ The New York Times: Trump seeks “to undermine the very science on which climate change policy rests.” (Cartoon [corrected]: Keith J. Taylor.)
■ But the administration is backing away from a decision by slimeball ex-EPA chief Scott Pruitt to give Chicago-area polluters—including Wisconsin’s emerging Foxconn plant just north of the Illinois border—big breaks on smog regulation.
■ The former president of the Chicago Historical Society, Lonnie G. Bunch III, has been named the first African-American to lead the Smithsonian Institution.

‘I’m no radio expert, but …’ The Trib’s Kristen McQueary slams a Chicago radio station for cramming an out-of-town morning show down listeners’ ears.
■ Reigning Jeopardy! champ and Naperville native James Holzhauer has pulled within $325,000 of all-time leader Ken Jennings’ record haul …
■ … and Jennings says he’s bummed out at not being “the Jeopardy! guy” anymore.

‘Buckner refused to let the worst moment in his career define him.’ The Trib’s Paul Sullivan says defining the legacy of ex-Cub Bill Buckner, who died yesterday, by a misstep in the 1986 World Series is an error.
■ Your Square publisher on Facebook yesterday: Leading Buckner’s obituary with a photo of that fateful moment was “a dick move.”
■ An acclaimed Sun-Times journalist—“a maestro of wordplay” whose work has inspired Chicago Public Square—is dead at 93.

Chicago Public Square comes to you free … unless you’re one of the outstanding human beings whose support keeps this service growing—people including Sandy Heitzman, Tim Colburn, Mike Dessimoz, Les Nelson and Carmie Callobre. And, gee, it’d be swell if you’d join them.
■ And thanks to reader Pam Spiegel for proofreading help this issue.
* One of whom is married to your Square publisher, [clarifying] but who is not the judge quoted by Injustice Watch.