‘Reasonably frightened.’ That’s the state in which political science professor and former Ald. Dick Simpson, now an adviser to Mayor Lightfoot, says Lightfoot should keep the City Council as she takes the reins of power.
■ The Sun-Times’ Mark Brown details how Lightfoot used the audience at her swearing-in to make aldermen squirm. 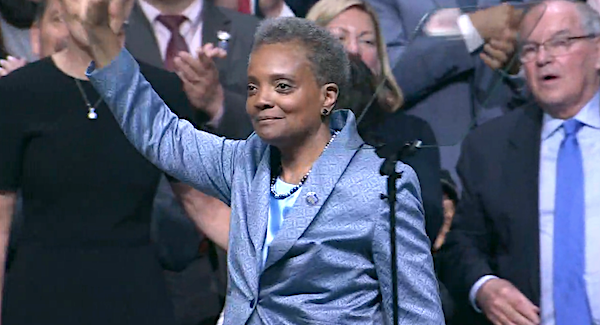 ■ Read her inauguration acceptance speech.
■ See who’s on her team—so far.
■ Lightfoot’s giving her administration 60 days to detail how it’s ending deference to “aldermanic prerogative” in decision-making unless expressly required by law. (You can download the executive order here.)
■ Streetsblog Chicago’s John Greenfield says Lightfoot’s crackdown on clout “could have a major positive effect for walking, biking, and transit.”
■ A man was shot early this morning just blocks from Lightfoot’s home in Logan Square.
■ The Beachwood Reporter recounts some little-known (because they’re imaginary) inaugural festivities, including “Traditional transfer of keys to glass case where aldermen’s testicles and ovaries are kept.”
■ Rahm Emanuel’s new gig is no surprise: Contributing editor for The Atlantic, which has published 12 of his homilies since October.

‘I was pissed, to say the least.’ A DePaul University freshman was one of hundreds of people who yesterday joined a downtown protest of new assaults on abortion rights across the country.
■ Presidential candidate and New York Sen. Kirsten Gillibrand on The Daily Show last night: “Women need to fight … like everything that they care about is at stake. Because it is.”

A pattern to his pardons. CNN says President Trump’s decisions on whom to pardon tend to favor cases spotlighted on TV. 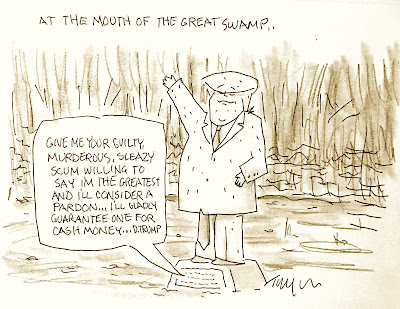 ■ The Daily Beast: A Fox News host has been lobbying Trump privately to pardon accused war criminals. (Cartoon: Keith J. Taylor.)
■ Rejecting the president’s fight to keep his financial records secret, a federal judge delivered what The Washington Post’s James Hohmann calls “the judicial equivalent of what kids call a sick burn” …
■ …or, as Wonkette’s Evan Hurst puts it: “The Prize For Handing Trump His Ass In Court Goes To DC Judge Amit Mehta!”

We’re No. 1. Moody’s Investors Service ranks Illinois atop a list of states whose budgets are least prepared for the next recession.
■ A plan to let Illinois voters decide on a constitutional amendment that would allow higher taxes on the wealthy now needs just a vote by the full House.

Barn swallow. The Dressbarn chain is closing all of its 600+ stores nationwide.
■ Ford is laying off the first of 500 salaried workers today. 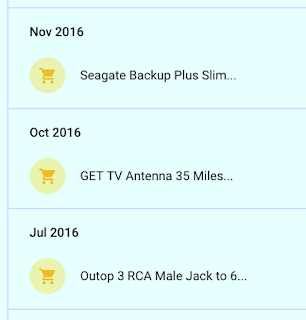 Google knows. It has a well-hidden page that shows what it’s discerned about everything you’ve bought online—especially if your receipts are sent to a Gmail address.
■ See what it knows about yours here.
■ Chicago real estate developer Sterling Bay, which has helped Google grow in Chicago, has set its sights on populating the new Lincoln Yards development with life sciences research space.

Someone you should know. Robert F. Smith, the billionaire tech investor who announced during a commencement speech that he’s paying off student loans for this year’s graduates of Morehouse College, has Chicago ties aplenty.
■ Stephen Colbert’s concerned: “As someone who frequently gets asked to give commencement speeches, I have just one thing to say. … What are you doing, man?”
■ The Onion: “Chase CEO Giving Commencement Speech Pledges To Double Whole Class’s Student Loan Debt.”